Sang. Ho-Sang made his debut on Thursday in Dallas against the Stars,he had two shots on goal in 17 minutes of ice time as the Islanders won 5-4.

Now,I’m sure you’re wondering why I’m even mentioning this story,let alone leading off the week with it. Well,I’ll tell you. The 21-year-old Ho-Sang came to the Islanders and is wearing #66,the number of Pittsburgh Penguins legend Mario Lemieux.

And he’s being vilified for it by the Canadian media and it was a debate topic on Pittsburgh sports radio. Some feel it’s sacrilege to wear it,other feel that the player wearing it will feel pressure on his back for doing so. Lemieux’s number is not retired league-wide like Wayne Gretzky’s #99 is and is available for any player to wear.

Ho-Sang says he wears the number in tribute to Lemieux and has worn the number since he was in the Ontario Hockey League at age 15.

This,to me,is one of the dumbest controversies in sports. Ho-Sang is free to wear whatever player number is available and #66 clearly was,so that’s what he’s doing. Him being bullied for doing it is outrageous. Often times players will wear numbers in tribute of another. Think of all the players who have worn #23 because they liked Michael Jordan, or #16 because they wanted to be like Joe Montana. Are they disrespecting those players by doing that? Of course not! Neither is Ho-Sang.

Leave the kid alone and let him try and have a successful NHL career!

Now that Brandon Marshall has been released by the Jets, I have four words for him: Sign with the Patriots!

Marshall,32,has been in the NFL since 2006 and has yet to play a postseason game in his productive career. He’s 59 catches away from 1,000 for his career and has over 12,000 yards. While he had a disappointing 2016 season with only three touchdowns and 788 yards, he would do well in a system like New England’s where Tom Brady has another reliable target to throw to alongside Julian Edelman and it makes this dynamic offense even better.

Beyond that,it gives Marshall a chance to do something he deserves; play for a winner. It’s hard to believe that a guy like him hasn’t been on a playoff roster. I know how much he wants to win and we all know that his time in the league isn’t going to be much longer. I think Marshall in a Patriots uniform would be a match made in heaven for both him and the team.

Jose Calderon was a member of the Golden State Warriors this week…for two hours!

Calderon was signed by the Warriors only to be waived two hours later so that they could sign Matt Barnes,who was waived by Sacramento following their trade of DeMarcus Cousins.

Here’s my question: Why are you wasting Calderon’s time in the first place? Why not just sign Barnes outright?

Calderon has found a home in Atlanta after being claimed off waivers,but it makes me wonder why they would even sign him if they’re not going to use him at all.

The guy who has the last laugh is Calderon,who will be making $415,000 courtesy of the Warriors. That’s $207,500 per hour that he was a member of that team. That’s an hourly wage that both you and I would enjoy having any hour of the week.

Does he get a ring if the Warriors win the title,though? That’s my last question about that! 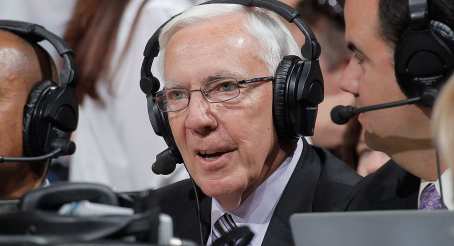 The Sacramento Kings haven’t had many constants during their 32 years in town,but they have had one from the very beginning; their radio play-by-play man Gary Gerould.
Gerould called his 2,500th game for the team on Sunday at home against the Utah Jazz.

From their early days at the first ARCO Arena to the glory days of the early ’00s to the near end of their time here before they were saved to moving into the Golden 1 Center, he’s seen it all and has done his job with style and grace.

Even before the Kings moved to Sacramento,Gerould was a sportscaster for KCRA-AM and KCRA-TV and did racing coverage for ABC/ESPN and was regarded as one of the best pit reporters in the history of auto racing. He even worked for NBC during their coverage of the 1988 Summer Olympics in Seoul,South Korea.

I first knew of Gerould when he did commercials for Raley’s supermarkets in the 1980s and 1990s before I even knew he called NBA basketball games. I then knew who he was when I would watch or listen to Kings games. What I really love about him is his voice,like Jon Miller of the Giants, Gerould has a voice that’s hard to duplicate or impersonate. Like Miller,I have had many car rides with Gerould on the call of a game guiding me home and hearing him announce “Heeeeeeeeee’s got the triple!” puts a smile on my face or “Heeeeeeeeeee’s got another one!”, I love it!

Congratulations,G Man on 2,500 games, I hope there’s many more for you and I do hope that,one day,we see you and the team celebrate a championship along Capitol Mall. You deserve to get to see that!

That’s Odds & Ends this week,we’ll catch you next time!