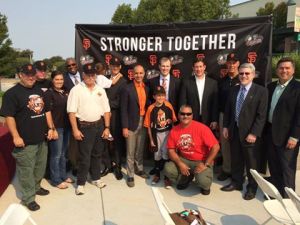 A’s fans need to quit their sniveling over the team losing their RiverCats affiliation to the Giants. Now.

Thursday marked the end of that 15-year partnership that had the A’s moving their affiliation with the Nashville Sounds while the Giants became affiliated with the RiverCats. The Sounds and A’s agreed to a four-year affilation deal while the RiverCats and Giants agreed to just two. Both affiliations begin next season.

“We appreciate the 15 successful years we’ve had with the Oakland Athletics,” said River Cats President Jeff Savage, “and we’re grateful for the tremendous support that the region has shown us. Our mission here at Raley Field has always been, and always will be, giving the Sacramento community the best fan experience possible. We’re extremely excited to join the Giants family, and can’t wait for our 2015 home opener on April 9.”

The reasons why the switch came to fruition is because there are more Giants fans than A’s fans here and if you looked around Raley Field at a game, you can see enough orange in the crowd to know that. Also,television ratings for the Giants are far better than the A’s in Sacramento and other areas.

I understand why A’s fans in Sacramento and beyond are pissed, they got to have the opportunity to see their own players develop here before they got sent up to the majors. But it’s time to let this go,A’s fans because the RiverCats are just not that into you. It was a business decision that the RiverCats had to make in order to keep their team more relevant in this area and affiliating with the Giants does just that. Maybe if the A’s did a better job at marketing and putting asses in seats then this affiliation switch never happens.

“What we want to do is to take every element we use to market the Giants and make it part of our presence in Sacramento,” Giants CEO Baer said Thursday.
Baer has also stated that the team would like to open stores that sell Giants merchandise in Sacramento,which I would like to see again (the team had a Dugout store in Arden Fair’s Market Square in the 1990s).

The San Francisco 49ers may need to be in panic mode. At 1-2, the 49ers have not scored a single point in the second half in any of the three games they’ve played this season.

The latest loss came to the Arizona Cardinals where just like their home opener against the Bears they held a halftime lead (up 14-6). Down 20-14 the 49ers drove the ball to the 5-yard line, but an unnecessary roughness call against San Francisco pushed them back. The 49ers commited nine penalties totaling 107 yards.

The Cardinals with Drew Stanton at quarterback in for an injured Carson Palmer,won the game 23-14. The 49ers next week host an undefeated Philadelphia team to try and get their first-ever win at their new home, Levi’s Stadium.

It isn’t looking very good for the 49ers at the moment, but they do need to make better adjustments and find a way to get things going in the second half. This cannot be a good first half team because that’s going to lead to a let-down of a season,and for fans who are hoping the 49ers gets to another Super Bowl, it’s unacceptable. 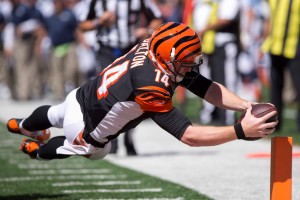 The Bengals may be making the case as to why they’re the best team in the AFC. At 3-0 they have been great both offensively and defensively. They continued their dominance Sunday by beating the Titans 33-7. The first touchdown scored was a reception by quarterback Andy Dalton himself.

On a trick play where Dalton flipped the ball to receiver Mohammad Sanu who ran to his right and spotted Dalton and threw the ball to him for the score. Dalton became the first Bengals quarterback to score on a touchdown pass and the first quarterback to do so since Tyler Thigpen did it as a Kansas City Chief back in 2008.

“I was joking with the guys all week: Who’s going to catch the first TD pass, me or one of the other guys?” said Dalton, who caught one pass at TCU. “In practice, that (defender) wasn’t out there. I thought I was going to get hit.”

The Bengals take their undefeated record into a bye week and then head to New England to face the Patriots on Oct. 5.

With so many stories about domestic violence and child abuse in the NFL hogging the headlines, one story about family and love finally surfaced. 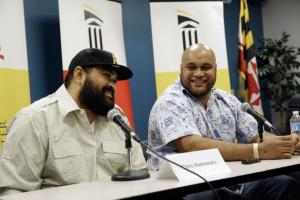 Former Baltimore Ravens defensive lineman Ma’ake Kemoeatu retired from the team following the 2012 season which saw them win Super Bowl XLVII so he could donate a kidney to his brother, retired Pittsburgh Steeler Chris Kemoeatu,who spent seven seasons with the team before his 2011 retirement due to kidney problems.

Three weeks ago was when the successful transplant took place and the two brothers held a joint press conference on Wednesday to discuss why Ma’ake made the choice t go forward with the transplant.

“He couldn’t play anymore, and I didn’t want to be in a position where he couldn’t play but I’d keep playing,” Ma’ake said. “As soon as my brother’s health was at risk I wanted to stop everything.”

Ma’ake is the oldest of seven children and said it is his job to make sure his younger siblings are taken care of.

“I’m the oldest of the seven kids, and it’s my responsibility to take care of my younger brothers and sisters,” Ma’ake said. “If my younger siblings need blood, it’ll be my blood. If they need a kidney, it’ll have to be my kidney.”

In a time where we hear nothing but bad news come from the NFL in regards to off-the-field behavior, it is refreshing to see a story about giving someone a second chance at life. I wish the Kemoeatus well in their recovery,which is expected to last three more weeks.