The Best MLB Stadiums That Were Never Built

There have been many beautiful new state-of-the-art baseball stadiums that have been built over the last 25 years in Major League Baseball, but there have also been some great concepts throughout history that never came to life. This is my list of the 10 best stadiums that were never built. 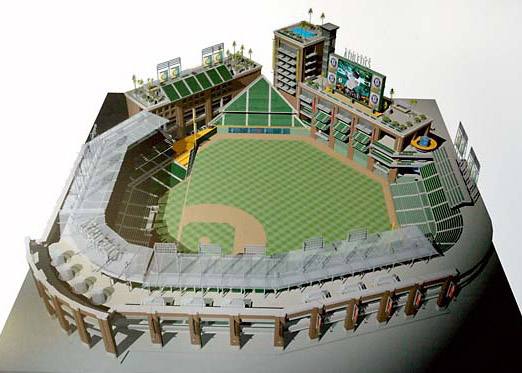 The Oakland Athletics have been trying to get a new stadium longer than any of us care to remember and in many cities than we care to remember. There have been proposals to build next to the current stadium, in Fremont,in San Jose,in Narnia,but their best design in my opinion was this 35,000 seat gem proposed in 2005.

The location was just north of the current Coliseum site on 66th Avenue and surrounding the stadium was to include a ballpark village with apartments and condominiums as well as a hotel built into the ballpark in left field. The plan was abandoned later that year when the owners of the land refused to sell to A’s owner Lew Wolff and he was unable to get the city of Oakland to acquire the land for him.

I think this stadium out of all of them is the best looking. I like the small capacity, I like the configuration, I like that there’s a pool on the top of the hotel in left field,but my favorite feature is the triangle seating section in left field. How cool is that?

I don’t like much about the A’s as a Giants fan,but this ballpark had it been build would’ve been great to go to. I would love to see it resurrected if they ever can decide on a site.

One thing the Tampa Bay Rays haven’t had in their 20 years of existence is a great stadium to play in.

In 2007 they tried to make that happen with a proposal to build a 34,000 seat retractable roof stadium in downtown St. Petersburg,Fla. on the current site of Al Lang Stadium. The stadium,which would have opened in 2012, was a beautiful design with a lot of open air and sitting right by the water of Port Charlotte,but unfortunately there was not enough financial or political support and plans were shelved in 2008.

I think out of the many proposals the Rays have had for a new stadium in Tampa or St. Pete, this was the best one. The team has plans to build a new home in historic Ybor City,but that is just in the planning stages as of press time.

In 1986, the Chicago White Sox were looking to replace the aging and decrepit Comiskey Park and a plan to build a 45,000 seat retractable roof stadium in Addison,Ill., which is 30 miles west of Comiskey Park.

Somewhere along the line with the proposal, the roof was removed and it became an open-air stadium plan.

The ballpark was put to a vote for the citizens of Addison and it failed by 43 votes. 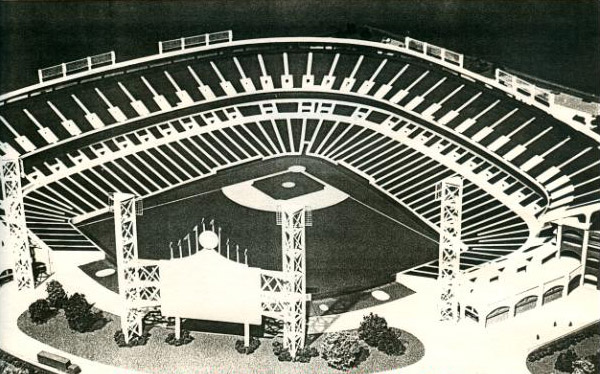 I know that this stadium,had it been build,would look dated now,but back then it would’ve been a neat place to see a game. Whether it be with the retractable shell dome or the open air design with the exploding scoreboard coming over from Comiskey, the Addison site would’ve been great. 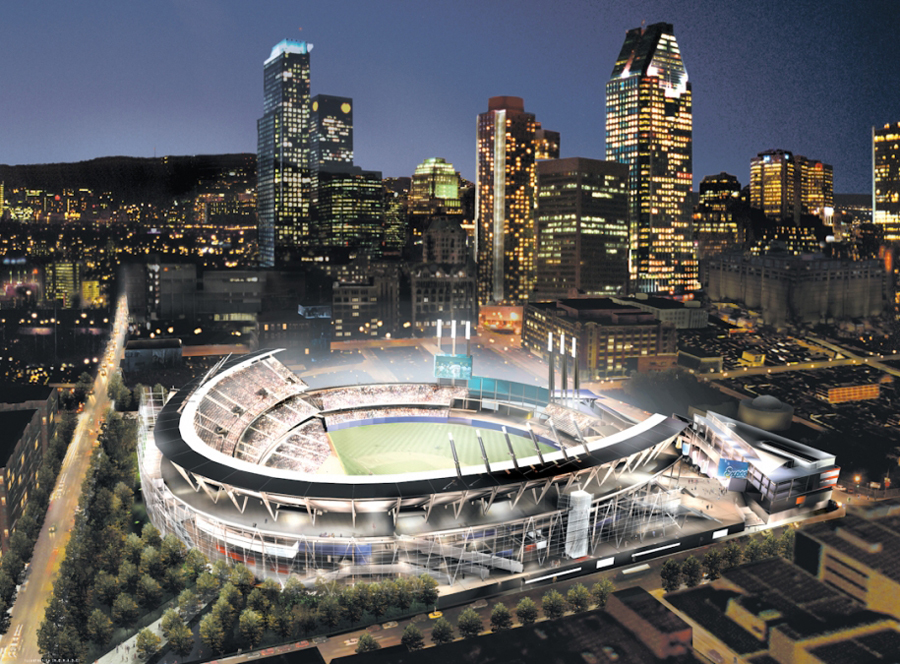 Before the Montreal Expos left for Washington DC in 2005, the team was exploring new stadium options and sites in order to stay in Montreal and hopefully regain a fanbase that was staying away from the team in droves.

Enter Labatt Park. Now there was more than one Labatt Park proposal and for this list,the 2000 proposal was,in my opinion the best one.

The park would have been located in downtown Montreal and would’ve been an outdoor park made of steel and glass with a capacity of 36,287. The project,however,was delayed over and over due to funding issues and the plan ultimately died once the Expos relocated.

I think a downtown outdoor ballpark would’ve been great for the Expos and honestly if this city ever gets another shot at an MLB franchise they should have an outdoor park somewhere downtown. It would be great!

In the 1990s the San Francisco Giants were looking for a new home by whatever means necessary,even looking to the south at San Jose. The Oakland A’s had to give up territorial rights to the South Bay so the Giants could possibly move there to build this 45,000 seat baseball-only stadium pending voter approval. It didn’t pass and the team nearly moved to Tampa Bay.

While the Giants didn’t move to Tampa or San Jose,I do like this design by the team. I know there’s only one picture,but I like the shape of the stadium and how it looked on the outside. This was the beginning of the retro ballparks making a comeback and had this ballpark been built,it would’ve been a nice one. Not as nice as the place they call home now is,AT&T Park,but still a nice one. In the end,the team made the right call on the home they have now.

Before they moved into Marlins Park in 2012, the team looked for years and years to find a new South Florida home. One site I liked was the Miami River site which was proposed in 1999. It was a site near Metrorail,I-95,and the Miami River that had a “parasol” roof that shaded the seating areas.

This site was a strong candidate for the Marlins to consider,but in the end the site where they currently play,at Bicentennial Park was chosen instead. 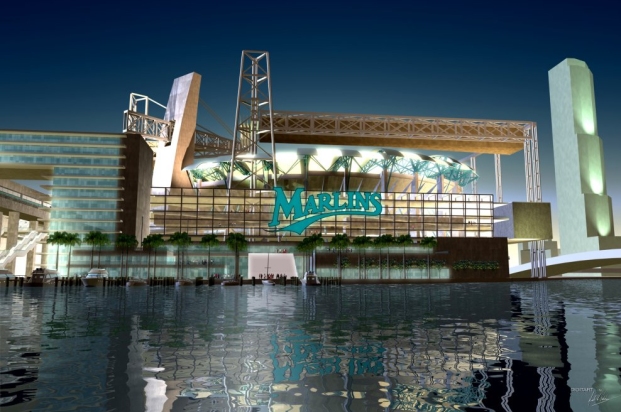 I honestly think the current park they play in could’ve worked much better here,especially since it’s a waterfront location and there are several ballparks that are near the waterfront. The Marlins just missed that train and it’s too bad.

A lot of Red Sox fans will hate that I put this on here and while I agree that tearing down an historic ballpark like Fenway Park would’ve been a tragedy, the designs for a new Fenway Park looked pretty damn good.

In 1999 a new Fenway was proposed to be built adjacent to the current one. It would’ve looked much like the original with the infield and Green Monster coming over from the old park.

As expected the plan was met with a lot of opposition and by 2002 was abandoned altogether. The team decided to renovate Fenway in 2011 and the park should have about 50 years of life left in it,so don’t expect a new Fenway anytime soon. The current one,about to start its 106th season, is working out just fine.

Pirates of the Monongahela River,1958 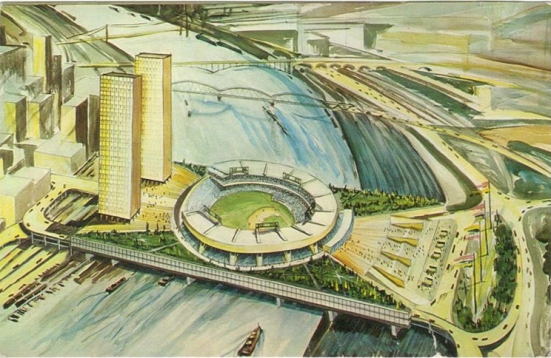 If you’re going to be a Major League Baseball team called the Pirates,you just have to have a stadium built on the river,right?

Before the Pirates moved into Three Rivers Stadium with the Steelers in 1970, they looked at a few concepts,one of which was a multipurpose stadium on the Monongahela River in the north side of town on a bridge-like platform.

The project was abandoned due to cost issues,but how cool would it have been to see a stadium built over a river? I don’t even know if you can propose such a thing now,but nonetheless it was in interesting idea even for 1958. 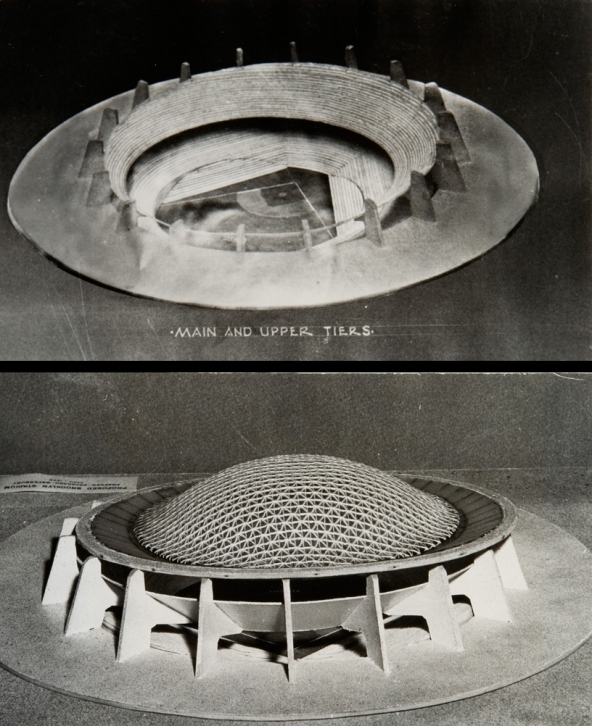 Before the Dodgers moved to Los Angeles in 1958, the team was trying to find a way to stay in Brooklyn and leave cramped Ebbets field behind. Plans for a domed stadium at the Atlantic Yards (where the Barclays Center home of the Brooklyn Nets now sits) were unveiled.

Had it been built, it would’ve been the first domed stadium in all of sports, preceding the Astrodome by as many as five years.

However, Robert Moses, a New York city official in charge of development, was against the idea and instead offered the Dodgers a site in Flushing Meadows (where Shea Stadium and later CIti Field were later built),but Walter O’Malley declined and instead decided to take his team to California following the 1957 season.

This would’ve been a cool thing to happen for the Dodgers. Sure,the place would’ve looked absolutely dated by the 1980s, but it would’ve been a game changer. Had it been built,we may not have ever had the Dodgers or the Giants move, the Mets would’ve never existed and West Coast baseball may not have grown as quickly as it did had this ballpark happened. But O’Malley wanted it to be in Brooklyn and Moses didn’t,so it never came to be.

Before the Twins ultimately moved to Target Field in 2010, plans for a downtown ballpark near the river and the Metrodome were unveiled in 1997. The stadium would’ve had a retractable roof,a trend that was already being seen on new ballparks in Arizona,Seattle,and Houston.

The plan,however,was absolutely flawed in terms of the complex funding process that ultimately upset fans ,the public and politicians alike and the bill to fund it died that same year.

The site would ultimately become the Guthrie Theatre which opened in 2006.

The Twins in the coming years after the dome proposal would go through more proposals as well as talks of relocation to North Carolina and even being talked about as a team that might be contracted by Major League Baseball. Eventually the Twins did get their new home and the rest is history.

I really like this design because it looks like it could be built today and still look very good. I like Target Field a lot,but this design would’ve better suited a team like the Twins who do play in the Midwest where they see a good amount of rain during the season. It’s too bad it wasn’t built because it would’ve been a surefire jewel of a baseball stadium.