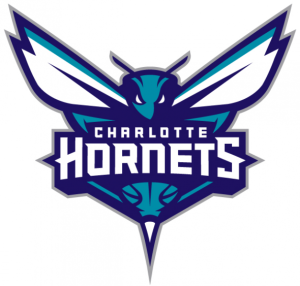 As the Charlotte NBA franchise plays their final season as the Bobcats, the team on Saturday revealed what their identity will be when they become the Hornets. The Hornets, as you well know, played in Charlotte from 1988-2002 until their relocation to New Orleans. That team became the Pelicans this season and the Hornets nickname will return in the 2014-15 season.

The color scheme, unveiled last month, is very similar to what the original Charlotte Hornets wore, teal and purple magically mixed and intertwined together. The new logo is a more aggressive and menacing looking hornet with the Charlotte Hornets wordmark is in the center. Basketball outlines are on the lower body of the hornet and ending with the stinger,of course.

The team also unveiled secondary logos,one of them featuring an updated version of Hugo, the team’s very first mascot who served as the team’s primary

logo,which to me looks cartoonish compared to the new logo,but it works because it is a link to the former Hornets team that was so beloved before the 2002 move. Hugo has a giant smirk on his face and what appears to be a basketball stuck inside his tail. He still has the sneakers on,of course.

A third logo, a sideview of a hornet,was also unveiled.

I think the Hornets did an A+ job in creating a new identity for the team with using classic colors and elements for the new logos. I think fans will like this and I am anxiously awaiting their uniform unveiling,which as soon as it happens, will get reviewed here at tjthesportsgeek.com!

It is great to be back writing about sports and inserting my commentary to the world,let’s go for it! Our first Odds & Ends in 16 months starts with the […]
Odds & Ends-Volume 235
%d bloggers like this: