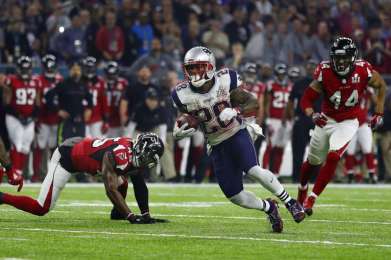 Super Bowl LI between the Atlanta Falcons and the New England Patriots saw the latter team basically grab victory from the jaws of defeat. Throughout most of the game,the Falcons behind quarterback Matt Ryan looked dominant through three and a half quarters.

The Patriots were not very good in most of this game. Their offensive line and defense looked shoddy, the experienced men on the field look battered, and their quarterback looked anything but calm and collective.

Even I,a longtime Patriots fan,was of the thought that the game was in hand with Atlanta leading 28-9 after the third quarter.

But the fourth quarter was where the Patriots got back in it and in a big way. After a Stephen Gostkowski field goal, the Patriots were able to get the score to a one-possession game as Tom Brady connected to Amendola for a six-yard score and then a two-point conversion with a direct snap to James White. Then they got the ball back and gave it to White for another score and a short pass to Amendola was good for a second two-point conversion to tie the game at 28 which gave us the first ever overtime game in Super Bowl history.

The Patriots won the coin toss and made sure to get down the field to score a touchdown,and that came courtesy of White from two yards away to seal the win for New England. This is the Patriots’ fifth championship and second in the last three seasons.
Brady was named Super Bowl MVP,going 43-62 with 466 yards and two touchdowns.

“There were a lot of plays that coach talks about, you never know which one is going to be the Super Bowl winner,” said Brady. “There were probably 30 of those plays tonight and (if) any one of those were different, the outcome could have been different.” 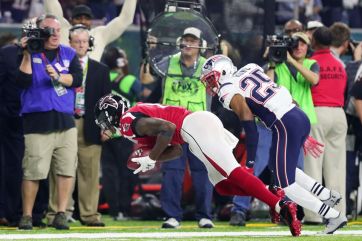 As for the Falcons, you gotta tip your hat to these guys. They wanted to win just as much,if not more than the Patriots did. They played with a lot of hunger,intensity,and determination.

Ryan had 286 yards passing and two touchdowns, Devonta Freeman had 11 carries and 75 yards and Julio Jones had four catches,two of them were spectacular along the sidelines as he kept both feet in.

What I couldn’t help but think was why the Falcons didn’t run the ball more on the Patriots’ suspect defense because the Patriots were having trouble stopping it most of the night. I also think bad clock management could’ve saved the Falcons and might’ve possibly netted them a win and a Lombardi trophy. I think if this team stays together, they can get back to the Super Bowl. No question about it. They were every bit able to win this game and they probably should’ve, but that’s why they play 60 (plus) minutes.

the fourth quarter to keep a drive alive for the Patriots. With the Patriots down eight and facing a 1st-and-10 from their own 36 in the fourth quarter, Tom Brady threw up a pass to Julian Edelman that was tipped and in the air for the longest time with three Atlanta defenders on him. Edelman went between the legs of one of them and with the ball nearly hitting the ground,he made sure it didn’t and secured it. The replay confirmed that he caught it.

When I saw this catch, I actually thought he had it through and through when I saw it live. Replay kept showing him catching it. For all the drops he had in the game, Edelman perhaps made up for all of it by having his instincts kick in at the best possible time by finding a way to have that ball not touch the ground being in the circumstance he was in to do so. Well done,good sir.

I have to say this regarding the commercials, they weren’t very good. Most of them were too touchy feely and during the Super Bowl I want to laugh my ass off.

One commercial was able to do just that and it was the one for Skittles where the boyfriend is throwing the candy at his girlfriend’s bedroom window and instead of going to the window she is actually catching them as they’re being thrown. Then the rest of the family gets to catch the candy as it’s being thrown. Even a robber and a cop get in on the action,too.

Other than that one and another for Avocados from Mexico (one I’m sure Donald Trump enjoyed), the rest of them weren’t very good. If you’re going to be spending $5 million on a 30 second spot,don’t you think there should be some creativity behind it? I think if you’re thinking otherwise,you’re wasting that money on an ad that lacks quality and substance.

That’ll do it for our Super Bowl edition of Odds & Ends,our regular edition will be out later this week!