We begin this week’s Odds & Ends with the red-hot San Francisco Giants,who have won 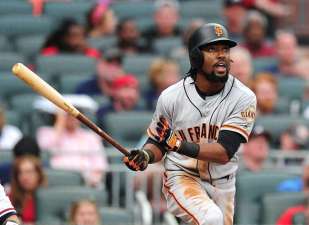 11 of their last 14 games and have won their last five series, the latest being a sweep of the Atlanta Braves over the weekend on the road, their first sweep in nearly a calendar year. Not only that,they still have yet to play their best baseball.

Not only that, a great deal of injuries are hampering the team. Guys like Madison Bumgarner, Joe Panik, Johnny Cueto,Mac Williamson, Hunter Pence,Mark Melancon,and Josh Osich are all on the shelf. Yet they keep going with guys like Alen Hanson getting the call-up from Sacramento and making an impact at the plate and at second base. Andrew Suarez has been pitching well since his call-up and won his first game of the season on Sunday.

“It’s something I’m never going to forget, for sure,” Suarez said. “I’m just happy we got the win and especially the sweep.”

Giants starters have a 2.55 ERA in 17 road games this season.

“That’s huge and that’s what has to happen,” said manager Bruce Bochy. “When you have injuries, hopefully you have depth and you have somebody come up and do a nice job for you.”

The Giants are currently sitting at 19-15 and third in the division, four and a half games back of Arizona,and four back of Colorado. Their next series,in Philadelphia,begins today.

I think this team,despite all their injuries thus far, is playing some excellent baseball right now. Sure,there have been some sloppy moments, but overall, they’re playing well, especially the guys who have just come up. They’re in a position where they’re being asked to fill in for guys who are All-Stars and are filling in adequately. Not to mention the production from Andrew McCutchen, Brandon Crawford,and Evan Longoria has been remarkable. Like I said,they’re playing good ball now,but when some of these guys get back from the injury list, this team is going to look and play a lot better.

After 27 professional seasons in both Japan and the United States, Ichiro Suzuki has announced his retirement…for now.

Ichiro,who came back to Seattle after stints with the Yankees and the Marlins, will be shifting into a front office role as a special assistant to the chairman. The job is far from a desk job,it’s rather more of what Suzuki has done every day of his career in the major leagues. He’ll still be in the clubhouse and go through pregame workouts and preparations and take part in batting practice.

“During the game I will be doing the same preparations I’ve been doing the entire time. Nothing is going to change for me that I did as a player,” Suzuki said. “But I can’t say for certain that maybe I won’t put on a beard and glasses and be like Bobby Valentine and be in the dugout.”

He is,however,leaving the door open to returning to play in 2019 and the Mariners would be the team he will play for. I will say that this is an odd way to exit the game,even if he isn’t done with playing yet. But if he is,what a hell of a career he has had. He has been a great player,a great steward for the game both here and his homeland,and an outstanding person in the game. I think my fondest memory of his career is his inside the park home run in the 2007 MLB All-Star Game in San Francisco. I hated that the National League lost that game,but was impressed by Ichiro’s home run that never left the park. He’s gonna be missed,if it is,however,the end. 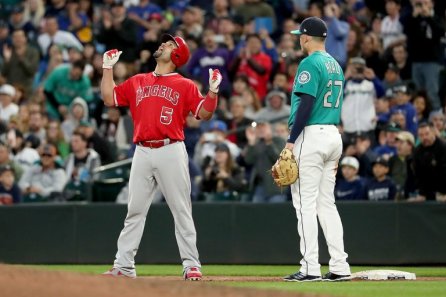 On Friday night against the Mariners in Seattle, Pujols reached the milestone when he singled on a soft liner to right field with two outs in the fifth inning off of Seattle pitcher Mike Leake. Los Angeles went on to win the game 5-0.

“I was really excited, but at the same time you still have a game you need to play, and you still need to focus to win that game,” Pujols said. “That’s what I told those guys. Let’s go win that game so it can taste a little better.”

Pujols joined Hank Aaron, Willie Mays and Alex Rodriguez in having both 3,000 hits and 600 home runs. He is also the fourth player in four seasons to reach 3,000 hits,joining Rodriguez in 2015, the aforementioned Ichiro in 2016,and Adrian Beltre in 2017.

Congratulations to Albert on his amazing feat. It hasn’t been an easy last few seasons for him,especially since he hasn’t been the same person since coming to the Angels. He isn’t the same player he was in St. Louis,but he is still getting production when he can and his team is having a good season overall so far this season.

The 2018 MLB season marks the return of something I forgot that I missed-the bullpen cart. On Friday night,the cart in Arizona made it’s first trip when Houston reliever Collin McHugh climbed aboard when he entered the game.

“It was there, they provided it for us, so I decided to give it a shot,” McHugh said. “I am still new to this whole bullpen thing so I don’t think I have too much of a routine to deviate from.”

The Diamondbacks have had the cart ready for use since Opening Day, but in 17 prior home games,no reliever opted to use it until McHugh did.

“I was kind of jealous,” Arizona reliever Archie Bradley said of McHugh going for a ride. “I’ve been wanting to use it, haven’t found the right time. But yeah, he’s the first guy to use it and maybe more guys will jump on. I’m going to keep jogging out.”

Arizona’s cart is the first one to be used in the major leagues since 1995, when the Milwaukee Brewers shuttled pitchers in a motorcycle with a sidecar.

I actually like that this has come back. Although I don’t think we’ll see this is as much because so many relief pitchers like to jog out to the mound as it loosens them up, it makes me happy to see a bit of nostalgia come back into baseball.

The San Jose Sharks saw their season come to an end on Sunday when they were eliminated in the Stanley Cup Playoffs by the expansion Vegas Golden Knights in game six of the Western Conference Semifinals.

The Sharks have now failed to get to the conference final for the second straight season and the Stanley Cup Finals for the third season in a row.

It makes Sharks fans wonder what,if anything,their team has to do to get their franchise their first ever Cup win. After all, they draft well,they sign key guys to come to the team,and they made a good trade to get Evander Kane at the deadline to pad their Cup hopes,and the system they’ve had over the years has been a successful one,getting them into the playoffs nearly every season for over 20 years.

I think the answer may be to sign John Tavares. He’s still in his prime and unlikely to stay with the Islanders. Beyond that, he’s a dynamic forward who can score and who can lead. Adding him to the already robust lineup could be the edge the Sharks get to finally get them over the hump. Otherwise,it’s going to be business as usual and disappointment as usual come playoff time.

Finally this week, Brad Marchand of the Bruins had an unusual way of trying to get into

the heads of the members of the Tampa Bay Lightning on his team’s way to the exit from the Eastern Conference Semifinals of the Stanley Cup Playoffs-he licked them.

It became a problem,so much so that Marchand’s coach,Bruce Cassidy,asked him to knock it off.

“I saw the directive from the league,” Cassidy said. “I talked to Marchy about it [and said], ‘That’s what the league’s asked for, and we need you on the ice. We need you playing.’ So zip it, or whatever term you used.”

Cassidy understood that it was a tactic to try and intimidate Tampa’s players,but it was time to find a new one.

“If part of his MO is to annoy people, find another way to do it,” Cassidy said. “That’s basically what’s in front of him now. … preferably by scoring some goals — that would be the best way probably.”

Marchand had been held without a goal since the first game of the series. His antics continued in the fourth game of the series when he hit Lightning forward Ryan Callahan with a low-bridge check in the second period. Callahan later shoved Marchand’s face, and Marchand responded by sticking out his tongue and licking Callahan.

He also did this in the Bruins’ previous series against the Maple Leafs when he took his tongue to the face of forward Leo Komarov after having previously kissed him on the cheek during a regular-season game.

I get that a player would want to get into a player’s head whenever possible, but licking them is not a good way at all. It shows me that the the player instigating the act is far from interested in making the best impact for his team. How do I know? Take Lance Stephenson in his first go-around with the Indiana Pacers. He got a lot of flack when he decided to blow in the ear of LeBron James,then of the Miami Heat during the postseason. Stephenson was made fun of a lot after that and I expect the same to happen to Marchand. He only has himself to blame for that.

That’s all for this edition of Odds & Ends, we will catch you next time!