Where are your back-ups?

This season has been the season of the injured reserve list. With so many players getting hurt (most of them for the year), it is time for players to step up and play, more importantly the quarterback position. In St. Louis, Sam Bradford is gone for the season. In Chicago, Jay Cutler is gone for the moment. In Tampa Bay, Philadelphia, Cleveland,Buffalo and Minnesota they are looking for somebody to take the reins and lead their team back to success. With the exception of the Rams, these teams have not had that guy. 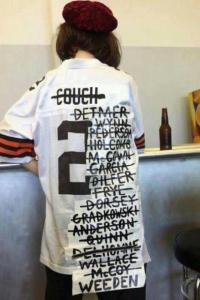 Will the Browns ever find a consistent starting quarterback? The search continues!

The Buccaneers thought they had that guy in Josh Freeman. Freeman showed flashes of promise his first couple of seasons,but has since faded into obscurity. Now with the Vikings, Freeman looked bad in his lone start against the Giants. The jury is still out on whether or not he can regain his old form and be a successful starting quarterback. Can Mike Glennon really be their future quarterback? At 0-7 right now, it doesn’t look good.

The Eagles have two young quarterbacks they need to decide on having start for them for the future in Nick Foles and Matt Barkley. Can either of them be the guy who can lead the Eagles back to the playoffs? Is it going to be another guy? Will they have to draft another quarterback in May?

Cleveland has not had a consistent starting quarterback since they were reborn in 1999. Brian Hoyer was looking to be the guy who could lead the way for the Browns to start winning again but was lost for the year. If he is back next year, will he be the starter? if not him,who?
Buffalo is still going with the E.J. Manuel experiment as they should. Manuel has not had the chance to prove himself and deserves an opportunity to. The Vikings are most in need of a legitimate starting quarterback. Christian Ponder, the aforementioned Freeman, and Matt Cassel have not been cutting it. It makes you wonder if the lack of a starting quarterback there will warrant Adrian Peterson to want to stay there any longer.

But why are there very few quality back-ups?

My feeling is that teams don’t develop them very well and they also keep too few of them on their rosters. It’s why teams like the Rams phone 44-year-old Brett Favre to see if he wants to come out and play while guys like Tim Tebow remain on their sofas. I think if teams made having a decent back-up quarterback a priority, they might have some more success. Don’t believe me? Ask the Patriots,Seahawks and 49ers how their once back-up quarterbacks have brought them success.