Johnny Manziel, you need to grow the hell up.

After serving his sorry excuse for a suspension-the first half of Texas A&M’s game against Rice on Saturday, Manziel showed everyone why he is a terrific football player, but also as immature as they come.

When Manziel showed up in the second half,he threw three touchdowns to lead Texas A&M to victory 52-21. He was also benched after receiving an unsportsmanlike conduct penalty. Manziel was talking to Rice players and pointed to the scoreboard.

Earlier in the game, Manziel was shown doing a gesture where he mimed signing an autograph.
There’s no question that this kid is talented, he has a lot of NFL potential, but what he lacks is maturity. If Manziel declares himself for the 2014 NFL Draft and becomes a first round draft pick, he could be a bust if he does not shape up. Right now, this kid is headed down the Ryan Leaf path.

I know he is only 20 years old, but if you’re the face of your university, you should be more level-headed than this. 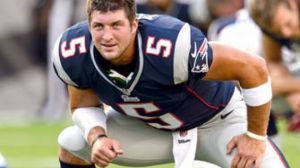 Tebow was unable to find consistency this preseason, completing 11 of 30 passes throwing for 145 yards with two touchdowns and two interceptions. He also ran for 91 yards.

Tebow thanked the Patriots for the opportunity and said he remains hopeful he will be a starting quarterback in the NFL.
I don’t think that will happen myself,but I think Tebow needs to consider other positions in order to get an NFL job. He is a talented football player, but not the best option at quarterback. If he wants to be a quarterback somewhere, he might try the CFL. I think he might be great there. 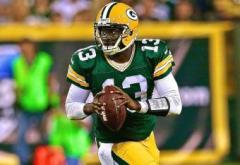 Speaking of quarterbacks getting cut, Vince Young was released by the Packers on Saturday after playing in three preseason games. It looked as though the former Pro Bowler would get the back-up job to Aaron Rodgers or would at least be the third quarterback behind B.J. Coleman and after Graham Harrell’s release,but it did not happen.

Young has fallen quite far the last few years. He went from being a national champion at Texas to being a Pro Bowl quarterback in his first season to back-up for the Eagles to going broke. His story has been a sad one, I feel bad for him a little. I have no idea if he will ever get another shot in the NFL,but I am pulling for him if he does. He came so close with the Packers that maybe he gets a look somewhere else.

I don’t cover auto racing much on this site,but this was too hard to not talk about. If you saw it on Sunday, NASCAR Camping World Truck Series driver Max Papis was bitch-slapped by a woman believed to be the girlfriend of another driver.

In the race, Papis and driver Mike Skeen were battling for second place. Skeen made an aggressive move that wrecked the two drivers. As Papis unbuckled his seat belt, members of Skeen’s pit crew grabbed him inside his truck. Afterwards is when the slap occurred.
I know these scuffles happen often between drivers in auto racing,but how often do the girlfriends of drivers get into it? That was pretty bizarre. Personally,I think she should stay out of it as the beef was between Papis and Skeen, but what does a single guy like me know about stuff like this?

And Papis’ claim of a broken jaw is a bit melodramatic. Nobody has ever had a broken jaw from getting bitch-slapped like that. C’mon,man!