We begin Odds & Ends with one simple question: Is Lonzo Ball scared of De’ Aaron Fox?

Ball,who was outplayed by Fox in the NCAA tournament this past year,has sat out every possible meeting for the two teams that drafted them. In July when the two teams competed in summer league play,Ball was out with an “injury”. Fast forward to Sunday’s preseason game in Las Vegas and he was out yet again with an ankle injury and team officials say he might miss the rest of the exhibition season.

The next time these two teams meet again is on Nov. 22 when the Lakers visit the Kings at Golden 1 Center.

It kinda makes me wonder if Ball is a little scared of Fox. Since he’s now a professional player,I would absolutely hope not. Sure, Fox dropped 39 on him in the Sweet 16 of the NCAA tournament when Kentucky beat UCLA 86-75 on Mar. 24. If Ball is truly scared of Fox,he’s being a sissy and the longer you run and hide from an opponent, the better the player you’re running from is going to be.

Be a man, face your foes.

With their star quarterback out with a back injury and the team losing three straight, the Oakland Raiders’ hopes to make the postseason for the second consecutive season. The frustration level with the fans accelerated in the form of a verbal altercation with left tackle Donald Penn and the fans in the parking lot of the Oakland-Alameda County Coliseum following the game on Sunday,a 30-17 loss to the Baltimore Ravens.

A video shows a group of fans behind a barricade with security in front of it yelling at Penn as he exited his vehicle and he approached the group. Penn was mocked repeatedly for signing an extension in the offseason to stay with the Raiders before he returned to his car and drove away.

Okay,first off,who the hell hangs out in the players’ parking lot after the game? Leave these guys alone,they just lost a game without their best player and you’re going to start shit with them and their contract situation? We get it, you’re upset that this team is struggling,but standing in the parking lot to bark at players who are doing their best isn’t okay. Go do something else.

Also,if you’re Penn, you don’t get out of your car to begin with. However,he did handle the situation well and without anyone getting hurt physically. Ignore these fools and drive away in the future,though. 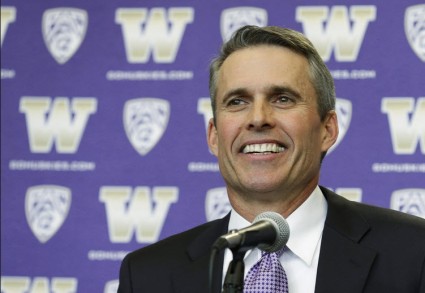 Last week, Petersen expressed his frustration over his team’s late start times that have games ending at 10 or 11 o’clock in the Pacific,calling it “painful” that his team has yet to start a game before 5 p.m. Pacific.

“I just want to say something to our fans: We apologize for these late games,” Petersen said. “And I’d also like to reiterate it has nothing to do with us or the administration. We want to play at 1 o’clock. It hurts us tremendously in terms of national exposure. No one wants to watch our game on the East Coast that late, and we all know it.”

Washington,ranked fifth after beating California in Seattle 38-7 on Saturday night, have yet another late start when they head to Tempe,Ariz. to face Arizona State, a 7: 45 p.m. kickoff.

The Pac-12 conference has their games telecast mostly on ESPN due to the television contract the conference and the network agreed to in 2012. ESPN dictates what times the schools play in order to maintain an audience for those games in primetime match-ups in that time zone, even if the East Coast is sound asleep when the game ends.

“We don’t live in a perfect world,” Pac-12 commissioner Larry Scott told Yahoo Sports on Saturday. “We’d all love to get all the value and benefits of our television partners, and we could choose the time that we play. We’re not in that situation.”

I do get Petersen’s frustration regarding the late start times, I really do. I’m a Cal fan myself and haven’t taken a liking to them kicking off close to 8 p.m. and as a result you’re seeing a lot of stadiums in the Pac-12 not as full as they once were because of these late starts,which has to be taxing on players as well as fans who are willing to come out and then have to do their best to drive home safely on a Saturday night when everyone’s out and some folks are probably driving when they shouldn’t be.

That having been said,I don’t think this has any effect on Washington’s performance as a team in any way. It may hurt them in terms of having their players being seen in Heisman races and maybe being ranked higher, but as far as how they’re playing, I see nothing to suggest that.

All in all,I would like to see the Pac-12 move some of these games up at least an hour or so,that way you can get more fans in to see your team play and to have them get home safely at a proper hour. Let’s hope that happens someday.

That’s all I have for another edition of Odds & Ends, see you next time!

Welcome to the first ever Late Edition, a column I will publish late in the day/early evening that is usually that’s something on my mind,something I want to share,or something […]
Late Edition-What Coronavirus Was Like

Hello Fam, Well,it wasn’t the Super Bowl matchup I was hoping for,but it is the one we get and nonetheless,I am still looking forward to watching. Who will be the […]
T.J.’s Pigskin Picks-Super Bowl LV