We begin this first Odds & Ends of July with the announcement of Bogdan Bogdanovic coming to the Sacramento Kings. Bogdanovic,as many remember, was a piece that was traded from Phoenix Suns during the 2016 draft for the eighth pick and after winning a EuroLeague championship and being the MVP of that championship tournament, the 27th pick of the 2014 NBA Draft will be a part of a young nucleus and a rookie class for Sacramento that is heavy with talent and potential.

One aspect of Bogdanovic’s game that is highly touted is his shooting. In 22 EuroLeague games last season,he shot 43 percent from three-point range. His ability to shoot from there is something the team has been lacking for years.

I like that he’s coming over to the team now and think that this is the right time for him to do so. I like that he has previous professional experience, that he’s won a championship at the professional level,and that he brings something to the team that they’ve needed for some time. It’s going to be interesting to see his role with the team and it’s clear that there is a plan to get something good brewing in the years ahead.

NBA free agency started over the weekend and it’s been wild and interesting. I think the

signing that was fascinating to say the least was the Philadelphia 76ers getting veteran guard JJ Redick for one year at $23 million.

He’s now heading east to a team with a lot of young pieces that now has a veteran presence whose specialty is to shoot from long range.

“It’s where I wanted to be,” Redick told ESPN in a text message

Redick’s deal has potential to be a long-term one should be perform well in Philadelphia.

Okay,so we all know that these contracts that these players are getting are pretty ridiculous and are making all of us re-think our paths in life because we should’ve been on NBA rosters instead, but giving this guy $23 million for a season is unreal. Sure,it’s a good place for him to go to be a veteran presence on a young squad that could use his guidance as a locker room guy, but wow,that’s a lot of money to give him. The 76ers have been bad for a while and obviously have a plan in place to be better. Chances are they will be next season, we’ll see if it pays off.

Vince Carter is still an active player in the NBA. Not only that,he might be the next player the Sacramento Kings sign to their young squad in the next couple days.

Carter is 40 now and not the player he once was when he was a perennial All-Star in Toronto and New Jersey, but nonetheless he is meeting with the Kings today. Carter last played in Memphis where in 73 games last season he averaged eight points per game. He also played under current Kings head coach Dave Joerger when he was in Memphis from 2014-16.

Carter has also openly expressed interest in joining the Golden State Warriors to possibly try and win a ring before his career comes to a close.

I have no idea if the Kings are going to sign Carter,if they do,it’s a decent move in that it gives the team a veteran that the young guys can learn from and that can be a sponge for them in that regard. I think he’d probably contribute somewhat,but I don’t think that’s

what the Kings would be signing him for. Nothing against Carter,but I would like to see a guy like a Zach Randolph come in for a season or two that’s still a very good player and can be a mentor to the youngsters.

So far the Kings have missed out on Andre Igoudala, Danilo Gallinari,and PJ Tucker. They also had interest in Taj Gibson before he signed with Minnesota. They have offered Wizards swingman Otto Porter,Jr. a max contract of four years and $106 million. It is yet to be determined whether or not Washington matches the offer. I do like Porter and would love to see him come to the Kings and it could very well happen. I have a lot of doubt that the Wizards are going to give him that kind of money to play behind Bradley Beal and John Wall. Let’s not get that crazy here. 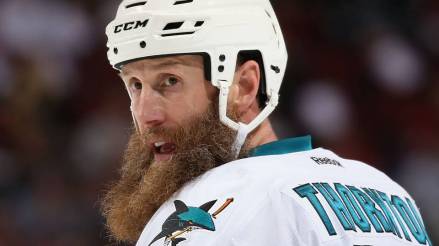 Not only is it free agency time in the NBA,but also the NHL and of local interest, longtime San Jose Sharks forward Joe Thornton is returning to the Bay Area on a one-year deal at $8 million.

“Joe has become one of the faces of this franchise since his arrival in 2005 and we feel it’s only fitting that he will be wearing teal going forward,” Sharks General Manager Doug Wilson said in a statement. “He is a generational playmaker and his accomplishments place him among the elite players to ever play the game. He has helped lead this team to new levels and continues to be one of the top two-way centers in the League. His leadership on and off the ice have been instrumental in this franchise’s success, and we’re excited that he has continued his commitment to this organization and the fans in San Jose.”

Thornton,38, was not short of interest as it’s been reported that 17 teams called in regards to his services.

“Ultimately I wanted to stay in San Jose,” Thornton said in a conference call.

Thornton is the club’s all-time leader in assists with 722.

Thornton tried his best to get his longtime teammate, Patrick Marleau, back in teal as 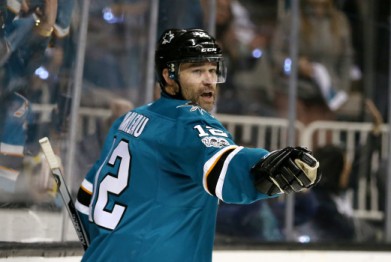 well,but the longest-tenured player in franchise history is heading east to the Toronto Maple Leafs.

Marleau,37, signed a three-year deal worth $18.75 million to play in Toronto to try and finally win a Stanley Cup that has long eluded him.

“I think I’ve worn out a few carpets pacing around the house trying to make this decision over the last couple of days,” Marleau said. “I’m extremely excited and happy to be a part of the Maple Leafs organization. It’s definitely an honor to be able to call myself a Maple Leaf.”

San Jose was willing to bring Marleau back,but not for multiple years.

“It was extremely difficult,” he said. “The organization has been first class to me over the 19 years I’ve been here. … My wife and four boys, it was extremely tough to finally pull the trigger and have them to move to a new country, one coast to the other, but everybody here in our house is extremely excited to be a part of the Maple Leafs and where they’re going. I’m ecstatic to be a part of that.”

Fans are understandably upset about Marleau’s departure, but honestly,the Thornton signing and Marleau leaving were both the right decision for the Sharks.

The Sharks were outplayed by a young and hungry Oilers squad in the first round of the playoffs. They looked tired and out of gas by the time they were eliminated. This team needs to get younger and by keeping around two veterans who aren’t losing ice time to youngsters who might be more serviceable in order to try and win a Cup. They can’t lose to up and coming teams who are younger and faster in order to try and get two old geezers a Stanley Cup.

Marleau is,without a doubt,the best player the Sharks have ever had. When the day comes,his #12 should hang in the rafters as the first ever in the SAP Center. However, it’s time for both him and the Sharks to turn the page. It’s for the best for everyone.

That’s all for Odds & Ends this week,have a great fourth of July! Stay safe and be safe, don’t blow up your hand or do anything stupid.