After 50 years, it looks as though a scene from the popular Disney ride “Pirates of the Caribbean” will be disappearing by 2018.

While the Wench for a Bride scene has been a part of the beloved ride for decades depicting traditional pirate fair, it’s also increasingly been criticized as sexist. 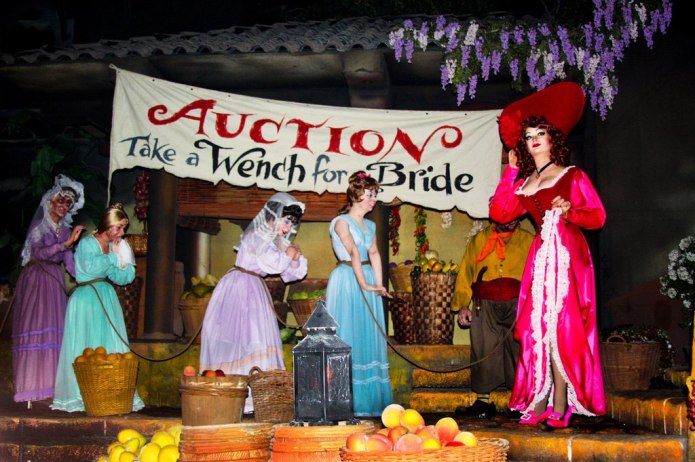 “Our team thought long and hard about how best to update this scene,” said a Walt Disney Imagineering executive in a statement to the Orange County Register. “Given the redhead has long been a fan-favorite, we wanted to keep her as a pivotal part of the story, so we made her a plundering pirate! We think this keeps to the original vision of the attraction as envisioned by Marc Davis, X Atencio, and the other Disney Legends who first brought this classic to life.” A park spokesperson added: “We believe the time is right to turn the page to a new story in this scene, consistent with the humorous, adventurous spirit of the attraction.”

Another scene was altered to have pirates chasing a woman’s food instead of the woman herself.

Many fans are understandably upset about a longtime part of a fan favorite ride changing, but I think many people are missing an important and pivotal part of how Disneyland works.

Disneyland changes all the time. It’s how Walt Disney envisioned the park itself,that it’s never going to be fully completed. That,in Walt’s own words “It will continue to grow as long as there is imagination left in the world.”

Now,you’re probably wondering how I feel about all of this and honestly,I’m kind of indifferent about it. I personally don’t feel that there’s any sexist or offensive about that scene in the ride at all. Maybe I’m just more adult about it that most and maybe there’s something I’m missing about that scene being racy or sexist or whatever.

However,whatever change they make to the ride isn’t gonna make me not want to go on it anymore,and chances are it will be the same with you.

Disneylanders get butthurt about ride changes all the freaking time. They got mad when Jack Sparrow was incorporated into the ride, they didn’t know what to think about Harold the Yeti when he was introduced on the Matterhorn,and of course, people got mad about Tower of Terror changing into Guardians of the Galaxy. The end result of the latter? A five hour wait time at one point the day that ride opened. That’s a pretty long wait for a ride a lot of people were upset over the creation of if you ask me.

I get it,we all have our favorites and part of those favorites are the vignettes in the ride. But they’re still the same in a lot of ways. Pirates of the Caribbean isn’t going to much less of a ride because of a couple tweaks and changes. It’s still going to be a fun ride and it’s still something I’m going to ride when the changes are final next year. In fact,I’m kind of interested to see how it changed,much like I’m anxious to see how Guardians of the Galaxy is different from its predecessor.

I guess what I’m trying to say is that change can be good in some instances. Sure,there are things that I don’t ever want to see change at Disneyland at all,but some of the recent changes that have been made I’ve come to accept. One thing that’s not changing is how much love I have for that place. It’s been an awesome part of my life the past few years and I wouldn’t have it any other way.