If they tank,I’m not watching!

The Sacramento Kings finished the 2016-17 season with a 32-50 record, one win shy of their win total last year and their 11th straight year without a playoff berth. The key point in the season was trading DeMarcus Cousins to the New Orleans Pelicans at the All-Star break. At the time of the trade,the team was a half game back from the Denver Nuggets for the eighth playoff spot in the Western Conference.

They ended up finishing 12th and nine games back of the Trail Blazers for eighth place.

Now I wonder what is going to happen next with this team. Who they’ll draft,if anyone on this current roster is coming back,who they might sign to actually come here in the offseason, or if they decide to do a 76ers-style tank job next year.

Let me say this right now, if that last thing happens, don’t expect me to go to a game or even watch one next season.

Buddy Hield and the Kings have room for improvement in 2017-18,if the organization chooses to take it.

I’m done with tanking, for the record,I’m against it. I’m against a team losing on purpose so that they can get a high draft pick the following year in the hopes that this one player is going to solely turn things around.

You’re probably wondering “Wait,didn’t your Edmonton Oilers tank to get Connor McDavid?”, and my answer to that is No. That Oilers team was just shitty, not very well coached, and the organization itself was bad from top to bottom. Not only that,but they didn’t even finish with the worst record in the league that year. Toronto did,which is why you still have a lot of Maple Leafs fans still sore about that. I was shocked as shit when the Oilers won that draft lottery to get McDavid and I had legit concerns that the team was going to ruin him like they did their other top overall picks from earlier in the decade.

Now,the Oilers are very good,but not without a ton of organizational changes from the front office to the coaching to getting better complimentary players for McDavid to play around. They did a proper rebuild. 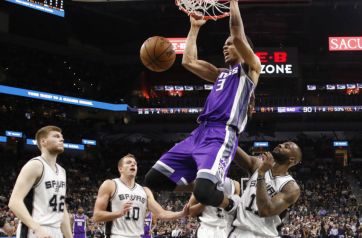 Skal Labissiere showed a lot of promise as a piece the Kings can rely on in the future.

Now the Kings need to do that,and they need to do it without the idea of tanking so bad that they need a top draft pick to get back to prominence. They will potentially have two picks in the top 10 for this year’s draft and this is a damn good draft and this is a great time to get two cornerstone pieces that you can build around for the future. So in my view, you don’t need to tank in 2017-18 if you draft right and make good moves. That’s Vlade Divac’s next big task.

Not only that,but they won 32 games this year. Sure,most of those wins were with Cousins, but that’s something to build on. Will they win more than that next year? Probably not, it may be more like 26-29 wins,which I’m fine with if these guys show that there’s something good brewing for the future and that there’s something to learn from in each loss. If they crap out and decide that winning 11 or 12 games next year is an acceptable result, expect me to tune out entirely.

I think fans overall want to see progress,and in my opinion, bottoming out intentionally doesn’t achieve that. It’s not a process, it’s just flat out not even trying. You play to win the game.