The Best Mascots in All of Sports

My friend Gary from BBrothersBlog.com suggested we do a list on best sports mascots. I thought it was a great idea. Now I know that there are fans out there that don’t like mascots for whatever reason,but I like them. They’re there to bring entertainment and fun to sporting events,which is what a sporting event should be-fun! I’m doing active mascots only because if a mascot isn’t there anymore,clearly there’s a reason for it. Here now is my list of the best sports mascots.

10. Billy Marlin,Miami Marlins
I like Billy Marlin. Sure,he’s got a cartoonish,plastic face,but he is probably one of the best things that the Marlins have going for them. He also is known for fighting other mascots (I know it’s staged,but it’s still funny) and funny pranks and that’s what gets him on the list. 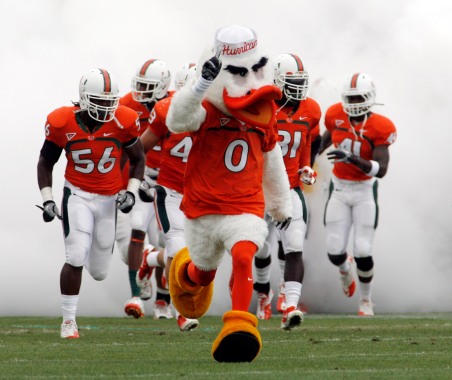 9. Sebastian the Ibis,University of Miami(FL) Hurricanes
My second South Florida mascot is on the list and it’s Sebastian the Ibis. I like this mascot because you would never think an ibis would be a cool mascot by any means, but to see Sebastian run through the white smoke every Saturday as the Miami Hurricanes take the field is pretty cool. 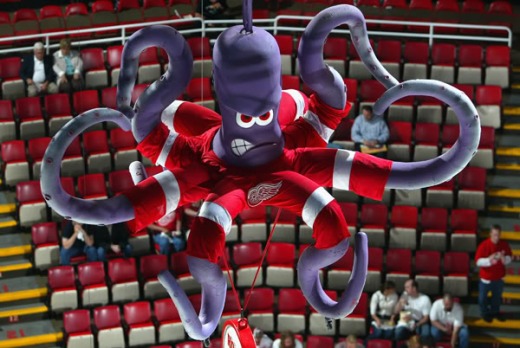 8. Al the Octopus,Detroit Red Wings
This is a unique mascot as it is one that doesn’t go up and down the stands or interact with fans. Al is the mascot of the Red Wings who lives in the rafters of Joe Louis Arena. He is lowered during introductions of the team and his presence is there during playoff time as well. The story of Al goes back to 1952 when two brother who owned a fish market threw an octopus onto the ice for good luck. The octopus has eight legs and back then it took eight wins to claim the Stanley Cup. The tradition of throwing octopus onto the ice continues in Detroit.

I just think Al is a cool looking mascot and an interesting one to have. Also,a lot of people have Al the Octopus tattoos. When a mascot can become a tattoo,it’s got to be on this list!

Despite being a California Bears fan,I love the Oregon Ducks mascot Puddles. He has been around a very long time and is one of the best in college sports. Not only has he starred in a hilarious SportsCenter commercial, but he also looks like a certain duck you would find in Anaheim. Puddles’ likeness came from a handshake agreement between Walt Disney and the University of Oregon to use the likeness of Donald Duck for their sports teams,which explains Puddles’ Disney-esque appearance. Great mascot! 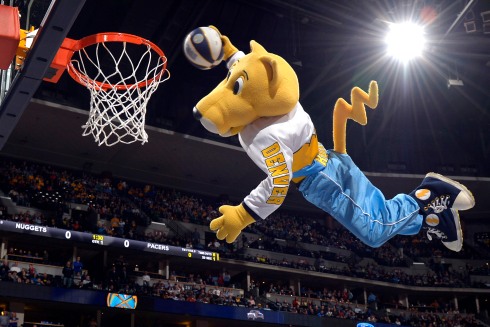 Rocky has been entertaining Colorado basketball fans at Nuggets games since 1990 with his high flying dunks and hilarious skits,one of which includes reading the newspaper in front of the opposing team’s bench. Plus he’s the only mascot I known of who has made a half court shot in nine consecutive games. He’s even gotten into it with officials and players, including Charles Barkley during his player career. He’s a great mascot and a very underrated one in my opinion.

I think the Spurs Coyote is awesome. Any mascot that has been ejected from a game has to be on this list. Yep,it’s true,the Coyote was ejected in a 2005 game against the Minnesota Timberwolves for being on the court during game play. Aside from that,he entertains NBA fans alike with his impromptu interactions with game officials and fans and dribbling a ball with his feet. He is defiinitely one of the NBA’s best mascots and one of the best in all of sports. 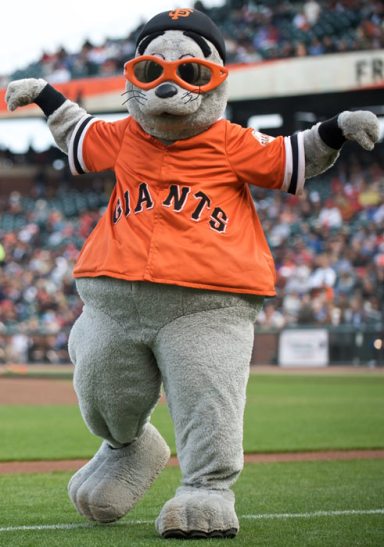 Is this a homer pick from me? Absolutely! Do I give a shit? No!

Lou Seal is absolutely one of the best mascots in sports. He is a seal who wears gigantic orange sunglasses and his hat backwards. Who doesn’t love that?

Lou Seal has been entertaining Giants fans since 1996 and although it took a while, fans have grown to love him. Not only that,but it’s cool to see a mascot who has local ties. San Francisco is home to seals and sea lions who sunbathe along Fisherman’s Wharf and Pier 39. Also,the Seals were once a minor league franchise that played in the city,so Lou Seal is an homage to that team.

One of the few mascots I’ve heard of that went away and was demanded to be brought back by the fans. Bernie Brewer was created in 1973 and would slide into a giant mug of beer whenever a Brewer hit a home run at old County Stadium. In 1984, Bernie was retired when County Stadium underwent renvoations. Fans voted for his return and in 1993 he was brought back and has continued his home run slide,although now at Miller Park he slides from his dugout (where he leads the cheers) on a yellow slide onto a platform in the shape of home plate in left field.

Go has been performing for Suns fans since 1980,when Henry Rojas,a singing telegram gorilla was sent to the arena wher security saw him perform and was asked to sgtay and perform for a while. The rest is history.

Go has been known for his slapstick antics and his famous dunks he performs before every fourth quarter. A true original and one of the best in sports.

He is probably one of the most well known and popular mascots in sports. A green monster with an extending tongue,he is the Phillie Phanatic. Making his first appearance in 1978, the Phanatic is known for riding on his ATV shooting hot dogs out of a cannon, dancing on top of the Phillies dugout,dancing in front of the visiting team’s dugout and taunting them,warming up in the bullpen,and polishing the head of bald dudes. He can get nasty,but it’s all in fun even if some people who have tried to sue him don’t always feel that way.

I think he is the best mascot in all of sports. He is very popular and very entertaining. Anytime I see the Phillies on television,I want to see what the Phanatic is up to. True story!