In Defense Of: Edmonton Oilers Fans Throwing Jerseys Onto the Ice

Welcome to another edition of In Defense Of, a series where we take a look at something in the world of sports that’s been perceived as questionable and/or wrong and stand up for that particular party,person,or thing.

From 1984 to 1990, the Edmonton Oilers were an NHL dynasty,winning five Stanley Cup championships, four of those with a man by the name of Wayne Gretzky on their roster. In 1988 the team traded him to Los Angeles in what was then considered a national tragedy in Canada. In the 1990s the team remained competitive,but nowhere near their glory days. In 2006 the team returned to the Stanley Cup Finals in a lockout season, but fell short in that series to the Carolina Hurricanes. This is,to date,the Oilers’ last postseason appearance.

Following the 2005-06 season,the Oilers had a mass exodus of talent, led by Chris Pronger who requested a trade because his wife did not like Edmonton. This made him Public Enemy No. 1 with Oilers fans and the team’s dismantling proved disastrous for the team itself. Ryan Smyth was traded to the New York Islanders during the 2006-07 season,which broke the hearts of many Oilers fans because Smyth was a beloved player. The Oilers finished in 11th place that season.

The Oilers haven’t fared very well in the decade since their last playoff berth. The teeam has won the NHL Draft Lottery four times,drafting Taylor Hall,Ryan Nugent-Hopkins,Nail Yakupov,and Connor McDavid. The team has also had seven head coaches in that span and poorly constructed rosters. Fans meanwhile,have been frustrated to continue witnessing a once-proud franchise become a dumpster fire. Some taking it to the point where they’ve thrown jerseys onto the ice as a sign of frustration and disgust,even after one game into the season as witnessed during the 2014-15 season. Incidents of similarity occurred before and after this one.

Reason #1: At least they aren’t burning them

When it comes down to it, I’d rather see someone throw their jersey onto the surface of play to protest their frustration of the direction of the team rather than set it on fire because they’re pissed. If anything,throwing the jersey onto the ice signifies that the team has basically lost a fan because of how bad the team has been and their continuous cycle of futility. If I was an owner of a team, I would take that to heart because the team does need to get better and everyone in the organization needs to step their game up in order to be more competitive as a franchise.

Personally,I think it’s a dick move to burn a jersey. When someone does that,it doesn’t tell me that they’re done with a team or a player,it tells me that they just wasted $100+ on laundry they’ve decided to destroy instead of maybe donating it to charity so someone else can wear it. At least when an Oilers fan tosses his jersey on the ice, it’s more than likely going to be donated to someone who does want it,someone who might not be able to afford a jersey otherwise because they’re so expensive.

To Oilers fans it seemed like if you were on the roster during the dynasty years,that’s how you got a front office job with the team.
In the 2000s, Oilers head coach Kevin Lowe, who was a pivotal part of the 1980s dynasty, was promoted to the team’s front office as the greneral manager, a position he would hold until 2008 when he was elevated to President of Hockey Operations. Steve Tambellini came over from Vancouver to succeed Lowe as general manager and would oversee the worst seasons in Oilers history until his dismissal in 2013.

“So I think I know a little bit about winning, if there’s ever a concern,” remarked Lowe when questioned about the team and their poor performance at a 2013 press conference.

Craig MacTavish,who played for the team during the dynasty years and was the team’s head coach during their 2006 Stanley Cup run, was brought back to the team’s front office in 2012 and replaced Tambellini. One of MacTavish’s first moves was firing coach Ralph Krueger despite the team showing improvement during the 2013 season and knocking on the door of the postseason before finishing in 12th place. It was reported that MacTavish relieved Krueger of his duties via Skype. He then hired Dallas Eakins,who became hated by fans for his style of coaching as well as his lack of emotion on the bench. Eakins was let go in 2014 after a season and a half and replaced by both MacTavish himself and Todd Nelson.

Fans had seen enough of what they felt was the Old Boys’ Club and one of the ways they showed their displeasure of what Lowe and MacTavish had helped to destroy was to throw their jerseys on the ice and even to boo the team as they came off the ice after embarrassing losses. They were tired of seeing the team they cheered for coupled with terms like “dumpster fire” and “constant futility.” They wanted to see a front office who had a vision for the team and a foundation and a plan to get the team back to winning.

After the 2015 season,Lowe and MacTavish were reassigned to other roles in the front office. Bob Nicholson was named COO of the Oilers and Peter Chiarelli was named President of Hockey Operations and General Manager. Todd McLellan,the winningest coach in San Jose Sharks history,was named head coach in the hopes that the team will soon erase their decade-long playoff drought. 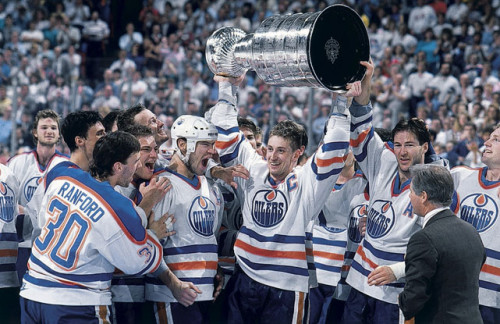 I think you have to put some of the blame on the dynasty years as a reason why Oilers fans were throwing jerseys on the ice because of the high expectations the fans have for their team doing well.

After the Oilers acquired Wayne Gretzky from the defunct Indinapolis Racers of the WHA in 1979, the team became part of the NHL when the WHA and the NHL merged. In 1983, the Oilers got to the Stanley Cup Finals,but were bounced by the New York Islanders who claimed their fourth Cup in a row. The following year,in 1984, the Oilers got revenge on the Islanders and won their first ever Cup. They repeated as champions in 1985. They won again in 1987 and repeated in 1988. Gretzky was traded following the 1988 season,but the team won their fifth title in 1990.

After the Cup loss in 2006, things went south for the Oilers and have continued to ever since. For a fan base that’s pining for the glory days to return and has been for over two decades now,they’re absolutely frustrated that a franchise that was once the gold standard for how to get things done and how to win championships is no longer that. I understand that every franchise for the most part has it’s time in the sun,but when it’s your team you want those good times to last as long as they can and honestly,I don’t think the fans in Edmonton got enough glory days because those five Cups happened in such a short span.

When the dynasty years were so brief and it left fans wanting more and it still does,especially with the team struggling as long as they have,you’re bound to lose your patience with the constant rebuilding. 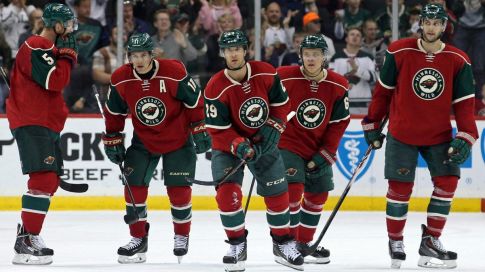 Reason #4: It Shouldn’t Be Taking This Long to Rebuild

Unlike most sports, it usually doesn’t take long for a team to go from being a doormat to a playoff team. In 2014, a Colorado Avalanche team that finished at the bottom of the standings in the Western Conference the year before went back to the playoffs for the first time in four seasons with rookie head coach Patrick Roy.

After a five-year absence from postseason play,the Minnesota Wild reached the postseason again in 2013 and have made the playoffs every year since.

So why is it so hard for the Oilers to get back to the playoffs?

Well,for starters, the front office had no plan to get the team back to prosperity during the Lowe/MacTavish/Tambellini years. When your franchise doesn’t have a plan other than drafting high and starting your top overall picks right away, it tends to shy away free agents or top tier players from ever playing for you. Also,as stated before,the team has fired coach after coach after coach. Sure,some of the firings were justified,but also a couple weren’t. Ralph Krueger should have been given another season to prove that something good was in fact brewing. I also think Todd Nelson should’ve been given some more time to an extent. But,with new front office people coming in at the time,I understand why they hired Todd McLellan.

Meanwhile, the process for other teams to get back to the playoffs seems to be going much,much faster. Things like that are going to frustrate you and make you do things like throw your jersey onto the ice.

If there’s a fan base in sports who deserves better than they’re getting,it’s the hockey fans in Edmonton.

Despite all the futility and frustration, fans in Edmonton have yet to shy away from games. They still sold out their old home,Rexall Place,and are expected to continue their good attendance at Rogers Place when it opens next month. It’s both a good thing and a bad thing. It’s a bad thing,in a sense,because the front office could look at attendance figures and basically figure that it doesn’t matter how good or bad the team is,the fans will still show up.

The good thing about the attendance figures being steady is that it shows the rest of the hockey world that despite the team being as shitty as they have been, they’re still coming to the games in the hopes that one day things will change for the better. For a loyal fan base like them, they deserve a winning product on the ice. For all the time and money they’ve spent cheering for a bad product, they’re due for a team who can get it done.

Is it coming soon? I hope so. Are things changing for the better? I think they are. And when they finally do,the fans will be there like they’ve always been and will be rewarded for their loyalty,and more importantly,their patience.

There you have it,my defense of Edmonton Oilers fans throwing their jerseys onto the ice. Maybe I changed your mind,maybe I didn’t,but I hope we gave you new insight as to why this occurs. That’s it for this edition of In Defense Of, we’ll see you next time!

Hello Everyone, Now we’ve reached the part of the year where I reveal my predictions list for the new year and 2021 is just days away and I have a […]
T.J. the Sports Geek’s 2021 Predictions
%d bloggers like this: