Is it just me,or does it seem like these town hall meetings the NFL is having in St. Louis,Oakland,and San Diego are a big waste of time?

With the Rams,Raiders,and Chargers expected to file relocation papers to Los Angeles in January, the league met with fans of each team last week. 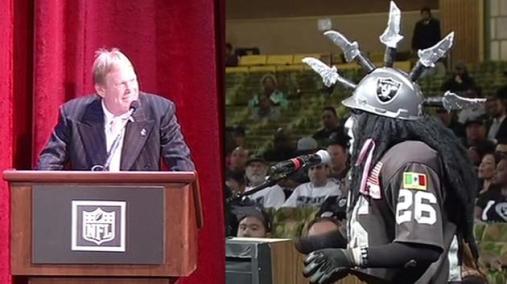 In Tuesday’s meeting in St. Louis, some fans drove as long as five hours to attend the meeting to tell NFL officials and owner Stan Kroenke their passion for the team and plead their case as to why the Rams should continue to call the city they moved to in 1995 home. Many NFL officials found it compelling to watch and were impressed by the passion of the fans.

In Wednesday’s meeting in San Diego,it was more of a gripe session than a meeting to voice their opinion on the team’s possible move. When Chargers special counsel Mark Fabiani came out,he was booed merciliously by the fans (which I was surprised to learn that fans still existed there because you certainly don’t see them at the games).

“Why don’t you tell the truth?” a fan yelled at Fabiani.

“It’s good to see all of you here tonight,” Fabiani said at one point.

“That’s a lie,” another fan yelled.

There weren’t even that many questions for the four executives that sat on stage. Even the event was poorly attended with 450 of the 1,000 tickets given out in advance being utilized.

Perhaps the meeting where people thought little of it but may have had the most impact was the Oakland one on Thursday. Raiders owner Mark Davis (who also owns a bad haircut) was in attendance at the Paramount Theater in Oakland to hear what the 400 fans in attendance had to say.

Davis proclaimed his support for Oakland,but fans questioned that support while working on a deal to build a stadium to share with the Chargers in Carson,Calif.

“We need help from the community as well to get something that our fans in Oakland can be proud of,” Davis said. “We don’t have that right now and we want it. It can be done in Oakland.”

Unlike the San Diego meeting, the Oakland meeting was very civil with some hecklers being escorted from the building. Some fans are looking on the bright side of the situation.

“We’re not that far off here in Oakland,”Gary Dowell of San Leandro told FOX Sports. “We’re one or two pieces away from making everything fall into place. We also want the NFL to realize that you’ve done this before. You tried to take them to L.A. and make it work, and it didn’t.”

Will these meetings convince the owners of the three teams to change their minds? In St. Louis and San Diego,probably not. In Oakland,I do think there’s hope even though it didn’t look that way with their meeting on Thursday. It seems like there’s more steam going there to stay than there is with the other two cities.

Pat Bowlen was inducted into the Broncos’ Ring of Honor Sunday night for his accomplishments as owner of the team since 1984. The team also named their indoor practice facility after him as well in his honor.
In Bowlen’s time as owner of the Broncos, the team has made six trips to the Super Bowl,winning twice and has only had five losing seasons.

Broncos president Joe Ellis said, “He’s got a tremendous run of success here, and he’s been able to sustain it. There have been down periods, and I think he’s taken steps to quickly correct those over time. … Five losing seasons. … Go through the rest of the league and run down the ledger. It doesn’t happen that way often.”

The thing that made this so special and so significant is that Bowlen is suffering from Alzheimer’s disease and is no longer able to make public appearances or run the day-to-day operations of the Broncos. Unfortunately Bowlen,71, was not present at the ceremony,but the people who were there were 20 members of the Ring of Honor as well as 40 players and coaches from the 1997 team that won Super Bowl XXXII, the team’s first championship (against the same opponent they hosted on Sunday,the Green Bay Packers) and former head coach Mike Shanahan. Denver won 29-10.

I’m glad the team has honored Bowlen,it’s very sad what’s happened to him and that one of the league’s best owners and the driving force behind bringing Sunday Night Football to NBC making it as big as it is now is not the same guy he once was. I’m sure,however,he is enjoying seeing his team be as successful as they’ve been this season.

Is it just me or is the replay process in hockey going against the Oilers big time this season?

First Connor McDavid is robbed of a game-tying goal in the game against the Los Angeles Kings at home on Oct. 25 with 3.2 seconds to go that would’ve sent the game into overtime and potentially given Edmonton a win. Saturday night a goal by Benoit Pouliot was waived off after Calgary coach Bob Hartley challenged that it was goalie interference by Mark Letestu and Karri Ramo, the Calgary goaltender. If you watch the video (see below), you’ll notice that there wasn’t much contact between Letestu and Ramo. Even the CBC announcers didn’t think it was interference. It was a clean,beautiful goal by Pouloit that was waived off. It would’ve been his 99th career goal. The Oilers lost the game 5-4.

Sure,officials aren’t perfect and neither is replay, but in a day and age where getting the call right the first time is key, that call was right the first time and should’ve stayed that way and as of late the Oilers have been getting screwed over when it comes to the replay process and I have to wonder what call they get screwed out of next. We’ll see if they get denied by the replay process again when they host the Flyers tomorrow night.

See you next time!