First,we got to start off with wishing everyone a great Martin Luther King Day. 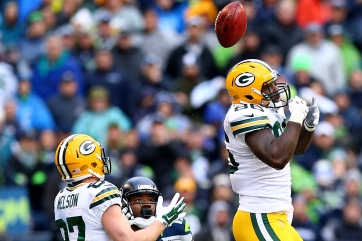 Packers tight end Brandon Bostick had one job. Am I right?

Now we’ll start off with the NFC Championship Game and how all of us thought the Packers had this in the bag. It turns out that Green Bay took their foot off the gas not just a little,but a lot.

First with the Lynch touchdown that pulled the Sehawks within five and then the onside kick happened and Packers tight end Brandon Bostick had the ball go right through his hands, allowing Seattle to recover the ball.

“I let my team down, I feel like,” Bostick said. “There was a lot on this game. I just feel like if I was able to do my job – my assignment was to block – Jordy (Nelson) would’ve caught the ball and the game would’ve been over.”

The Seahawks then fed the ball back to Lynch to take the 22-19 following a two-point conversion. The Packers did send the game into overtime,but Seattle drove the final nail into the hearts of Packers fans everywhere with a touchdown to Jermaine Kearse.

Though Seattle won the game,they didn’t play well enough to do so,especially Russell Wilson,he played like absolute shit (four interceptions). The Packers were indeed the better team yesterday,they just didn’t get the job done like they should’ve. I do think that this team will be back in this position again and are not done whatsoever.

Nate Solder scores a tocuhdown for the New England Patriots in Sunday’s 45-7 win over Indianapolis.

As for the AFC Championship Game, the Patriots did what they had to do to get to their sixth Super Bowl under Bill Belichick and deconstructed the Colts. For the third straight game, the Patriots ran the ball down the Colts’ throats and LeGarette Blount led the charge with 148 yards and three touchdowns. Indianapolis didn’t look very prepared and even looked confused when offensive lineman were coming in as eligible receivers (including a time when tackle Nate Solder caught a touchdown pass from Tom Brady.

Brady looked fantastic as always and Julian Edelman had a nice game as well. The Patriots will look to get their fourth ring and first since 2004 when they play the Seahawks in Arizona in two weeks.

“I know we’ve had some ups and downs this year,” Brady said, “but right now we’re up, baby, and we’re going to try to stay up for one more game.”

I believe that they will. This team reminds me of the 2003 team, a team that got off to a rocky start,but finished strong the rest of the season en route to a championship. I won’t make my prediction yet on a winner,but this Patriots team is looking very familiar to me if you catch what I’m saying.

Memo to all of you who say you aren’t watching the Super Bowl in two weeks: I am calling your bluff as of this moment right here,right now.

A lot of you who are saying it are pissed because the Seahawks are in or the Patriots are in or both teams are in,but let’s be honest, the Super Bowl is like the scene of a car accident, you’re curious to see what happened. Whether it be the game itself or if Idina Menzel screws up the national anthem or the commercials that the Today show already rolled out days before the big game,or the prerecorded melodies of Katy Perry during the halftime show. No matter what it is, your eyes will be tuned to NBC in two weeks to see Seattle and New England battle for the Lombardi trophy.

Look,we get it,your team isn’t there and probably missed the playoffs. It’s time to get past that and to quit pouting about it by harumphing and not “watching the Super Bowl”. You’re full of shit! I know and you know it.

Lawrence Tynes is too drunk on his past accomplishments.

If there weren’t any more reasons for me to hate the New York Giants more than I already do, add one more. Their former kicker,Lawrence Tynes.

Tynes unleashed a tweet taunting the Patriots over their loss in Super Bowl XLII in which Eli Manning and the Giants got lucky and won the game.

Tynes’ idiotic tweet reads as follows: “The Pats have learned to celebrate the hell out of those AFC Championships because the know what comes 2 weeks later.”

Really,Larry? You’re going to be this big of a douche and troll a team for a game that happened seven years ago? Don’t you have anything better to do? Oh wait,no you don’t because you’re sitting on your couch waiting for the phone to ring for a team to claim you for a few weeks when their regular kicker is either suspended for juicing up or hurts himself while celebrating.

When I say I do not like the New York Giants, take me at my word here. It’s shit people like Tom Coughlin, Sheli,and now Larry Tynes that make me feel this way.

The Washington Nationals just might now have the best starting rotation in all of baseball. They just signed Max Scherzer to a seven-year deal on Sunday and have bolstered what is already a stellar rotation who got to the NLDS.

With Scherzer coming aboard with Strasberg,Fister,Gonzalez,and Zimmermann (if he stays), the Nationals could be the early favorites to win it all in 2015. They have great bats in the lineup,the pitching is there,and you have a manager in Matt Williams who is looking like a rising star in the managerial ranks. Sure,you still have to compete against teams like the Dodgers,Cardinals,Pirates,and oh yeah,the Giants, but they’re showing that once October comes around,they’ll be ready.

Hello Fam, Another wild week of games being postponed and being drawn out until Tuesday,but I still did well on picks for Week 5 with a 9-5 record, with a […]
T.J.’s Pigskin Picks-Week 6 2020

One of the oddities of this 2020 NFL season is surely the fact that the Washington NFL team doesn’t have a name,and no,this current temporary name doesn’t count as […]
Renaming the Washington Football Team

Hello Fam, Well, Week 4 went pretty well picks wise for me, another double digit week with 11 picks correct and only four wrong,so I will take it. Week 5 […]
T.J.’s Pigskin Picks-Week 5 2020

Hello all, The season keeps on rolling and the picks keep coming. Last week I did pretty good and was able to go 10-5 on picks (Eagles-Bengals ended in a […]
T.J.’s Pigskin Picks-Week 4 2020

Hello,football fans! Well we have already gone through our first week of action and through that week I went 11-5 with my picks. Not bad,especially since you never know what […]
T.J.’s Pigskin Picks-Week 2 2020
%d bloggers like this: