Could the Rams be heading back to Los Angeles?

Late last week, it was announced that owner Stan Kroenke (who also own the NBA’s Denver Nuggets and NHL’s Colorado Avalanche) purchased 60 acres of land in Los Angeles near Hollywood Park and the Forum in Inglewood which hads led to speculation of a return of the team to Los Angeles. The Rams played there from 1946-94 before moving to St. Louis in 1995.

While the purchase for the land has been made, it is still unclear if the land will be used for a future stadium.

While the Rams may not be moving anytime soon, their current lease at the Edward Jones Dome has an escape clause where if the stadium is not among the league’s top eight sporting venues, the lease can be renewed on a yeearly basis.

In the time since the Rams and Raiders both left Los Angeles, the city has been used as a bargaining chip in order for other teams to get stadiums in their current cities.

I think that if any makes a move to L.A., it will be the Rams. I have long thought it would be the Jaguars,but they seem to be committed to staying in Jacksonville more than one might think. It would make sense for them to return there, they played there for nearly 50 years and still have a lot of fans there, not to mention the team still has offices there. While nobody is saying it for sure, I think this land purchase just might get the NFL back in Los Angeles. 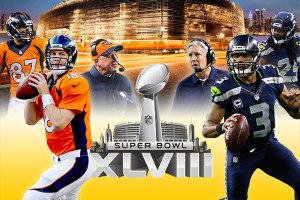 Now to the Super Bowl: All I can really say about it is that it was not the game I really expected it to be. I was sure this would be a closer game than it was and it was definitely not that. One thing you can point to that set the tone for the game was the botched snap from the Broncos 12 seconds into the game that gave the Seahawks a safety. The Seahawks then scored 34 more unanswered points before the Broncos finally scored their sole touchdown to make it a 36-8 score. The Seahawks won in stunning fashion 43-8. Malcolm Smith was named MVP of the game.

Whether you love them or hate them,give the Seahawks credit. They came into a game where they weren’t favored in and dominated it throughout against a record-setting offense that a lot of people (myself included) thought would be nearly unstoppable against. The Seahawks showed why they’re a good team, not just an outstanding defense,but a pretty decent offense that,when healthy, can be very explosive. The Broncos just did not play well. Period. Anything they tried didn’t work and it makes you wonder if they’re up to the challenge of winning the big game. They have the players and the talent,but do they have the drive?

As for the Seahawks,if they’re able to keep the nucleus of this bunch together in the offseason, there’s no question they have a great shot at repeating. Believe it!

One more thing, Bruno Mars was outstanding during the halftime show,along with the Red Hot Chili Peppers. It was probably the best halftime performance I’ve seen in over 12 years.

One of the biggest disappointments in the NBA season has to be the weak performance of the Los Angeles Lakers. While they barely made the

playoffs last year, the team this season is 16-31 and in 13th place. This team without Kobe Bryant is clearly not any good and his supporting cast is just not cutting it with Pau Gasol leading the way. Not to mention when Chris Kaman is your replacement for Dwight Howard,something’s not right. I know,I know,Howard was such a drama queen and wanted nothing to do with being there, but replacing him with Kaman is like trading your Corvette in for a Chevette.

It makes me wonder where this team is going to end up in the near future. Bryant turns 36 over the summer and his best playing days are over. He’s still a good player,but not as good as he was five or six years ago. The time to start planning for life after him should be now and the Lakers have done a poor job of doing that. I think this team should just collect their lottery pick,draft someone who can be the next cornerstone of their franchise once Bryant retires.