Our end of the year lists roll on with our final list for the year,we’ve saved the best for last.  It’s the Best Things About 2013. Without further adieu, here is the list!

I was sad as a lot of people were when Hostess decided to shutdown operations, but was optimistic that those products would return and I was right to because they did. Everyone’s favorites such as Ho-Hos, Ding Dongs,and Cupcakes are back as well as my personal favorites,the Coffee Cakes. As long as those came back, I was happy about the return and that is why this made the list.

I don’t condone drug use at all,but Rob Ford and his hi-jinks have made my year. Here is this guy who is mayor of one of the biggest cities in North America who admits to smoking crack and has the balls to not resign. Beyond that he has become this guy who is everywhere and causing mess. I think this guy is great! I hope he stops smoking crack,but I think he is great. You go,Rob Ford!

This became my summertime jam and to me is the best song of the year (It would have been Blurred Lines, but it is overplayed and has Miley Cyrus attached to it). This song sounds like it came from 1978 as opposed to 2013,but it still had that new feel to it. We haven’t had a great funk song like this in a long time and Bruno Mars is to thank for it, I think this guy is extremely talented and I hope to see more great songs come from him in the future.

It took me some time to warm up to this,but Taco Bell’s Smothered Burrito is awesome, it’s even better with shredded chicken. I love everything about it, it’s a burrito for starters, it has cheese, sour cream,rice,and is drowning in enchilada sauce. It is by far the best thing Taco Bell has introduced and I hope it stays on the menu for a while. Yummy!

6. Crossing the Golden Gate Bridge for the first time

In my 31 years of life I had not crossed the Golden Gate Bridge,partly because I have never had to go that way anywhere and also I am afraid of driving over bridges thanks to the Bay Bridge construction problems. But in August following my brother’s bachelor party in San Francisco,we took the bridge home. Although I was not feeling good due to anxiety and fatigue, it was pretty cool to do something I had never done. I hope to do it again,but in my own car and with me behind the wheel someday, it’s just going to take some time.

I am not a Michael Bolton fan, but I do enjoy his Honda commercials he did over the holidays. What else says Christmas like an ’80s singer standing on a Honda CR-V singing about snow falling? Nothing else if you ask me!
Not only were the commercials entertaining,but hilarious as well. You couldn’t help but laugh and smile. Well done,Michael Bolton! 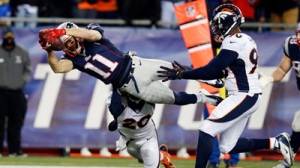 4. The Patriots beating the Broncos on Sunday Night Football

This was quite the game and if you turned it off early,you missed a spectacular one. After the Broncos put on a clinic in the first half,leading 24-0, the Patriots decided to come out and play, eventually taking a 28-24 lead in the fourth quarter.
The game went into overtime at 31 and after a while, it looked like the game might end in a tie (Green Bay and Minnesota tied earlier in the day),but after a Patriots punt brushed the leg of Broncos safety Tony Carter and the Patriots recovered the ball. Stephen Gostkowski kicked the winning field goal and the Patriots escape with a 34-31 win. Wow,what a game! I have never seen anything like it and I am glad I watched it.

3. Being the best man at my brother’s wedding

Up until September of this year,I had never been in a wedding or even a limo. I got to do both on the same day as my brother,Derek, married the love of his life,Holly. I was asked to be his best man in the spring and it was quite an experience,even though I was riddled with pain via a pinched nerve that I got when stretching to wake up to go to work.

Anyways,the wedding was probably the best one I have ever attended or been apart of because of the setting and my friends and family who were there. Also,my speech at the reception went over well and I was worried about that because I hate speaking in public. It was a joy to see my brother marry someone who really makes him happy and I know they are having a happy life together already.

2. The Sacramento Kings staying and the Maloofs leaving

In the beginning of the spring,it looked as if the only pro sports team my hometown has was headed to Seattle. But I should’ve learned from history when two years prior the team looked like it was going to Anaheim,but ultimately stayed. A group of investors headed up by Vivek Ranadive was looking to purchase the team and to keep them here when the Maloof Family announced the team was up for sale.

In a high profile bidding war between Seattle and Sacramento, the team ended up staying as the relocation committee of the NBA voting in opposition to a move to Seattle 22-8. Ranadive then was able to purchase the team.
The team is still here and is looking to move into a new arena in the area where Downtown Plaza is by 2016.

Tr1. Miami Heat fans leaving Game 6 of the NBA Finals before Ray Allen ties the game,only to see them try to return into the arena and being denied re-entry

Further proof that some teams have very fair weather fanbases, about a thousand fans or so left American Airlines Arena in Miami as the San Antonio Spurs looked to put a bow on the NBA Finals and win their fifth championship. But the Heat came back as Ray Allen sunk a three to tie Game 6 of the NBA Finals. Upon hearing the team had come back to tie it, fans clad in white T-shirts tried to get back into the arena and were denied as NBA policy states that once you have left the arena, you cannot return to the game.

It was hilarious to me because so many of these fans were not Heat fans prior to LeBron James coming there. What a bandwagon fan base that once James and Dwyane Wade are gone from that team will disappear faster than Derrick Rose to an injury.