It seems to me like being on the brink of elimination fuels this Giants team. It happened in Cincinnati where they reeled off three straight wins to take the series. Now they’ve taken the Cardinals to a seventh game which will be played tonight.
Barry Zito pitched undoubtedly the best game of his career on Friday going 7 2/3 innings and shutting out the Cardinals. It was absolutely thrilling to see him have that kind of game because we all know how much he has not lived up to the contract he signed back in 2007. I was very happy for him and very happy to see how much he was trending on Twitter on Friday with the #RallyZito hashtags (though I prefer the phrase Zito is Neato,it rhymes!).

Sunday night’s Game 6 featured Ryan Vogelsong striking out a career high nine batters in the Giants 6-1 win. The Cardinals did not look very good at all last night and though many think it’s a sign that they’re done, I never like to count them out. That’s a damn good team that I like to think doesn’t quit,especially when they’ve come this far.

I just hope it stops raining long enough for a game to occur tonight.

Holy crap! How did this happen?

Sunday I was in Union City, CA for an event and while I was there I was keeping an eye on the Patriots-Jets game on my new telephone. When I left the building I was in, the Pats were ahead 23-13 so I was sure they had the game won. As I walk to my car, the Jets make it a 23-20 game. OK, so maybe the Patriots get the ball back and score again to seal it, but that also did not happen. As I turned on the radio to KNBR 1050 to hear anything on the game, The Jets got the ball back and scored again to tie it. Then Devin McCourty fumbles the kickoff and the Jets get the ball back at the 18-yard line of New England and end up kicking a field goal to take the 26-23 lead. That’s where I changed the station to the NLCS Game 6,thinking the Patriots have blown another game which is now becoming true Patriot fashion and their entire identity this season.

I pulled over in Cordelia,CA and while at the Arby’s drive thru window waiting for my delicious Beef N Cheddar sandwiches, I looked at the score to see the final score and was shocked to see the Patriots had won. I guess a game isn’t really over until it’s over. 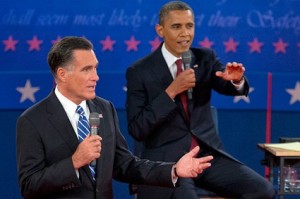 I don’t like to post about politics on a sports blog because nobody likes to hear about that from a sports journalist or commentator, but I am this time. Not to tell people who I’m voting for or who you should vote for or what candidate is scum.

I’m here to talk about that comment that Mitt Romney made about “binders full of women” at last week’s debate. I did not see the debate that night as I was on the air over at KSSU, but I did see highlights and one of them was that comment. I personally found that comment to be absolutely hilarious and I think much of America did,too. It didn’t matter if you were a Democrat or a Republican, liberal or conservative, peanut butter or jelly, that comment made you chuckle.

I didn’t find any political value in it personally, but some have and I have to wonder why. I think some of us who already have chosen sides take things said in debates a little bit too seriously. But if you’re an undecided voter, you should because I really hold debates to really be for those folks. The reason why people have made a big deal out of the comment Romney made is because it was a funny thing to say and I think it’s been ridiculous to think otherwise.

That is all I have this week!

By the way, you can catch me and my friend DJ Mappquest on Sports Madness, this Tuesday from 6-7pm Pacific Time on kssu.com, Sacramento State Student Radio.