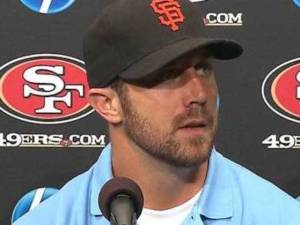 I don’t see what the problem is with Alex Smith wearing a San Francisco Giants hat to postgame interviews. Before I continue, I am a Giants fan (which,unless you’re reading this blog for the first time, should be obvious) and I’m not putting this into Odds and Ends because I am.

If you don’t know, Alex Smith was nearly fined $15,000 for donning the black and orange on his head during a postgame interviews,something he has done on multiple occasions dating back to last season. The reason being is that it is not NFL merchandise and it is forbidden.

If any player wants to wear a hat of their favorite MLB team (or the one that shares the city they play in for either support of that team,too or because they’re playoff bound), they should be able to. This isn’t the NBA where a player has to don a $3000 suit before speaking to the media, this is the NFL. Smith should be able to sport a Giants hat or an A’s hat or any kind of hat he wants. Both of those teams are on their way to seeing postseason play and it’s nice to see local players support local teams. It’s too bad the NFL doesn’t see it that way.

It is looking like the ship of sponsors for the Sacramento Kings is sinking. In the last week many major sponsors like Carl’s Jr. and Sleep Train have pulled sponsorship for the Kings. Sleep Train was thought to be the next to place naming rights on what fans knowingly call ARCO Arena. It has been called Power Balance Pavilion since the beginning of 2011.

Other sponsors such as Thunder Valley Casino,Sutter Health and VSP are said to be on the rocks according to local talk radio personality Carmichael Dave on Twitter. It is unknown why these sponsors are pulling from the team, but it is a big blow when a long time sponsor like Carl’s Jr. decides to not renew their partnership. It also gives the Maloofs some leeway with the NBA’s relocation committee if the team (and ownership for that matter) is losing support from local business owners and the community itself. The Maloofs can go to them and say “See, we don’t have local support. Here’s a list of sponsors who have left us as of late”, the relocation committee may look at that and agree with them to let them move wherever their hearts desire.

Personally,I think these sponsors aren’t doing this not so much as to help give the ownership group a way out. They’re doing it because they don’t want to do business with these guys so long as they own this team. I hope they know what they’re doing.

By the way, does this mean the Maloofs won’t be eating Six Dollar Burgers with a $6,000 bottle of wine anymore in the lobby of the Palms anymore?

If Melky Cabrera has done one thing right this season, it’s disqualifying himself from securing the National League batting title. While

it’s not an official league award, it is a statistical one that does bear a lot of merit in the baseball world. It wouldn’t have felt right for a guy who was banned by knowingly using an illegal substance to win it. Cabrera wrote a letter to the player’s union asking to be removed from the batting title.

“I ask the Players Association to take the necessary steps, in conjunction with the Office of the Commissioner, to remove my name from for the National League batting title,” Cabrera wrote in the letter, a copy of which was obtained by The Associated Press.

I do applaud Cabrera for doing what was right after doing something very wrong. He cheated, he knew that he did, and he feels remorseful and wants to make amends by stepping away from a batting title that was going to be tainted had he won it. While it is very respectable of him to do that, I’m unsure if I would want him back on my team,but he may catch on somewhere else. Whether he can be productive without the use of performance enhancing substances is another story that only time can tell. 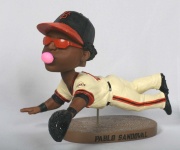 My good friend,Rodger from BBrothersBlog.com mentioned in his latest blog episode on Sunday, it is something of public outrage that when teams like the Giants give away items such as bobbleheads of Pablo Sandoval or Brian Wilson gnomes, they only have a limited number. It’s usually something like 20,000 to the first people in the gate get said items. Rodger stated his desire to see all fans get such promotional items and I have to agree.

It’s bad enough that some of these people who grab these items don’t even stay for the game or are real baseball fans. What they’ll do (and I heard one guy admit this on KNBR) is buy a ticket to the game, grab the popular promotional item, go home,and put it on eBay before first pitch ever occurs. While I’m all for capitalism, it isn’t fair to real baseball fans, some of whom like me, live hours away and take a lot of time traveling to the game only to miss out on something like that. I think having an amount of promotional items for the capacity of the stadium would be justified. The Giants make a lot of money off of these promotions, surely they can have enough for everyone who is in attendance.

I’m sure you’re expecting me to speak about last night’s Sunday night game. You bet I am!

(By the way,before I continue,the word official or any form of the word will be in quotation marks in every piece I write about football until we get professional ones back in the greatest sport in America.)

My Patriots absolutely put themselves in a position to lose and the Ravens took charge and won the game. Torrey Smith was amazing in this game during a time when he was hurting the most after the loss of his brother in a motorcycle accident.

The game winning 27-yard field goal made by Justin Tucker, on television, looks no good. To my four eyes, the more I watch the replay, the more no good it looks. The end result had several Patriots players protesting to “officials” as well as head coach Bill Belichick grabbing one “official” by the arm as they left the field.

If it seems like this is making Odds and Ends because my team got shafted, it isn’t. I’m seriously starting to lose a little bit of interest in football at the moment and the reason why is because the NFL’s integrity is being compromised by letting these replacement “officials” continue to do a job they are not equipped to do and through three weeks or regular season play (and four weeks of preseason play), the results have shown that. Why Roger Goodell is letting this continue this long and letting the integrity of the league die a little more week after week is beyond my grasp of thinking.

By the way, you can catch me and my friend DJ Mappquest on Sports Madness, this Tuesday from 6-7pm Pacific Time on kssu.com, Sacramento State Student Radio.