We begin Odds & Ends this Saturday with something that baseball either needs to fix or get rid of outright: Replay.

In the bottom on the ninth inning with the Giants trailing 5-1 to the Cardinals, shortstop Brandon Crawford hit a 427-foot two-run home run to cut San Francisco’s deficit to 5-3,but it was overturned to supposed fan interference,so the fan got to keep the ball and was dismissed from watching the game. Crawford’s home run was instead a double and the Giants end up losing the game by a 5-2 score.Friday the league acknowledged that the crew in New York got the replay wrong and sent out a letter acknowledging their incompetence and apologized for it.Had the home run counted,it would’ve been Crawford’s 13th of the year,which would have had him surpass last year’s total,something he did do on Friday.

I honestly don’t see how this could’ve been messed up anymore than it was. It was a clear home run, that fan did not interfere with the field of play at all and was wrongly ejected (and I hope that Major League Baseball sends him a letter of apology and offers him free tickets to a future game to make up for being thrown out of a game on someone else’s mistake), and the Giants deserved to try and win that game. I think that the league’s umpires need to study the ground rules of all 30 stadiums if they want to continue to use replay in its current form,otherwise they need to talk to other leagues to see how they run replay and take a couple of pages from their books,or scrap it altogether. It doesn’t seem to help anyone if a crew 3000 miles away doesn’t understand what constitutes as a home run or the configurations of a major league ballpark.

For the second consecutive season,the Cincinnati Bengals will be without linebacker Vontaze Burfict after he received a three-game suspension (originally five) for an illegal hit on Kansas City Chiefs fullback Anthony Sherman in week two of the preseason.

The league sent him this nice letter:

“This is not your first offense with respect to illegal hits to defenseless players; to the contrary, this incident is consistent with your pattern of egregious safety-related violations including your hit on a defenseless player during the 2015 Wild Card game and your hit against a Baltimore tight end away from the play on January 3, 2016. When players violate the rules intended to protect player safety on a repeated basis, and particularly when the violations carry with them a significant risk of injury to an opposing player … you must be held accountable for this continuing unacceptable conduct.”

Burfict has been suspended for six games for on-field conduct,the most for any player in 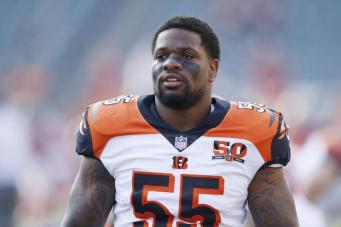 Honestly,I’m surprised that any player like him is still on this team’s roster. The Bengals have a bunch of players on their roster currently who are of questionable character and I think it’s hindering them a bit. Beyond that, they actually have played better without Burfict on the active roster, and it kind of makes you wonder whether or not they’re going to re-sign him next season as he is a free agent following the year. That team needs a culture change and an attitude adjustment if they’re going to be anything resembling a winning franchise. If you’re wondering why this team hasn’t won a playoff game in 26 years, their current culture is part of it.

It’s been an interesting year for Brock Osweiler. At the beginning of the year,he was the starting quarterback in a playoff game for a division champion, at the end of Friday he became a free agent after being cut by the team who is and has been regarded as the the league’s biggest trainwreck.

Osweiler was give his release by the Cleveland Browns on Friday when all teams had to trim their rosters to 53 players. He was traded there in the offseason by the Texans and was given a chance to start for the team,he started two exhibition games and didn’t perform well. He completed 12 of 22 passes for 67 yards. In contrast, rookie DeShone Kizer scored 23 points in almost two halves of football which is when the team turned to their young quarterback to lead the team from this point forward. Cody Kessler and Kevin Hogan will back up Kizer.

Osweiler was originally a back-up in Denver filled in for an injured Peyton Manning during the 2015 season,a year which saw the Broncos win Super Bowl 50. Following that season, Manning retired and Osweiler signed a free-agent deal to be the starter in Houston.

I gotta say that when you’re cut by the Browns,you know something’s wrong,but the crazy thing about Osweiler is that someone is going to bring him in to be a back-up on their roster. You can sense it. I wouldn’t be surprised if even the team he first played for,the Broncos,brought him back as their back-up and supposed quarterback of the future, Paxton Lynch,has had shoulder surgery and will miss significant time. I don’t know that he’s good enough to start for any team,but he is a quality back-up and for that a team should take a flyer out on him.

Finally this week,if I had a candidate for the team that’s most likely to go 0-16 this season,it’s gotta be the New York Jets.

The Jets haven’t been postseason bound since 2010 and it looks as though the streak is going to continue. The team traded perhaps their best player,Sheldon Richardson,to the Seattle Seahawks for Jermaine Kearse on Friday. Richardson was the Defensive Rookie of the Year in 2014 and now joins a great Seattle defense that just got even better.

Meanwhile,Kearse has been on a downslide in terms of production and when your new quarterback is Josh McCown,that’s probably going to hurt even more.Combine that with the team’s running back core of the aging Matt Forte and Bilal Powell and a receivers you couldn’t even pick out of a police lineup (aside from Kearse) and underwheming depth at quarterback and you’ve got a recipe for perfection in reverse.Now,I don’t think they actually will go winless,I projected them to have two wins this year and winning the top overall pick in the 2018 NFL Draft,but it’s highly possible,anything is. Especially if Christian Hackenberg is on your roster.

That’s all for Odds & Ends,have a great weekend and a safe and happy Labor Day.