We begin Odds & Ends this week with a trade announcement, the Boston Celtics have

traded first round picks with the Philadelphia 76ers,who are now going to select first for the second year in a row. Boston obtains the third overall pick as well as a future first-rounder in 2018 or 2019.

The trade is expected to be completed today,once complete the draft order from picks one through four will duplicate last year’s order with the 76ers at the top spot,the Lakers at the second selection, the Celtics at the third,and the Suns at the fourth spot.

With that first selection,Philadelphia is expected to draft Washington point guard Markelle Fultz, who has been regarded as the consensus top pick in this year’s draft. Fultz worked out for the 76ers on Saturday and also met with team officials and even some of the players.

Boston’s trading down means they’re likely to get a crack at Josh Jackson from Kansas,a player that the team has coveted and likes very much.

I’m sure many Celtics fans are sore about this pick being traded,but honestly it’s a win-win for both teams and both fanbases. The 76ers need a point guard and Fultz is by far the best one in this draft,so why not make a move to get the guy you want? They did and they’re going to be getting a talented guy to compliment the young mix of players they have. As for Boston, this roster is gushing with great young players and no matter where they pick,they’re getting a piece to add to what looks to be a promising future for them. Whether they draft Josh Jackson or Lonzo Ball or Jayson Tatum or (god forbid) De’ Aaron Fox,Boston could just about do no wrong, even if they decide to trade down even further than the third spot (which wouldn’t surprise me) and take a big man who is slated to be picked around 10-15, then they’ll be in good shape. 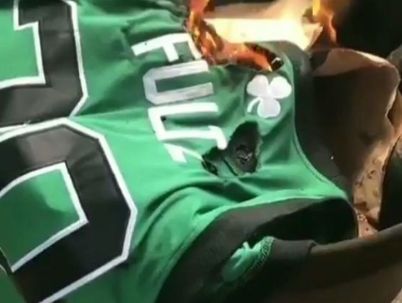 Keeping with this trade,something happened that caught my eye in the wake of it,a Celtics fan burned his Markelle Fultz jersey on video,and yes,it was a Celtics jersey.

Here’s my question, why the fuck are you buying the jersey of a player who isn’t even on your team yet? Or may never even be there? Don’t these fans know that these picks aren’t exactly set in stone until they’re,you know,actually selected by a team?

Fultz wasn’t a slam dunk pick for Boston because they are a team who is prospering off of being a team a series short of the NBA Finals and lucking out on winning the draft lottery. They don’t need to have the top pick,they already have a good roster. For the love of God, don’t buy a player’s jersey until he’s on the team. It’s not Fultz’s fault for the trade happening, it’s yours for wasting your money on a jersey like that.

I want a De’ Aaron Fox Sacramento Kings jersey as much as the next fan who hopes he falls to them with the fifth pick in Thursday’s draft, but I’m not getting it now, I’m waiting until he actually gets picked by the team. It’s called spending your money wisely,some of you Celtics fans should get on board with that before making dumb financial decisions that only bite you in the ass later. Just my thoughts!

Moving onto another draft,a draft of a different kind, the NHL expansion draft. This one takes place Wednesday where the Vegas Golden Knights will have their choice of players left unprotected by all 30 NHL teams.

Joining Fleury on the list of unprotected goaltenders are Roberto Luongo from the Florida Panthers, Peter Mrazek of the Detroit Red Wings and Michal Neuvirth of the Philadelphia Flyers.

The Golden Knights are required to take at least one players from each team.

Oh,and if Sharks fans want to know who is available to Vegas, among the notables are Joel Ward,Brendan Dillon,Paul Martin,and Mikkel Boedker. Joe Thornton and Patrick Marleau are also unprotected,but are also free agents.

I’m gonna come right out and say it,Giants fans, but it’s long been time for their hitting coach,Hensley Meulens to be relieved of his duties.

I’m sorry,but when your lifetime batting average was .220,that makes you far from qualified to be a hitting coach. Meulens has had this job for far too long,even when this team was winning three World Series the hitting was atrocious,and many years later,it still is. In my view, that’s why he’s still there. I know the players love him and don’t place blame on him,but they absolutely should. They also need to know that in the real world, there are bosses and managers you like who will get fired or go somewhere else in their careers. Baseball is no different.

Now,to be fair,it’s not Meulens who is the total problem. We all know that, to be honest,there’s blame to be spread across the board. From Meulens to Bruce Bochy to ROn Wotus to Dave Righetti to Mark Gardner to Buster Posey, it’s been all bad. I also place a ton of blame on the front office. This is the group of people in charge who thought that signing Mark Melancon and him alone was going to be the big move that would push the Giants into the World Series again,despite the need for help in the outfield and more help in the bullpen. Bobby Evans, Brian Sabean,and Larry Baer swung and missed and this is the result.

If you want to know why the Rockies swept the Giants this past weekend, it’s because they went ahead and made some moves and you know what? They’re paying off. They’re one of the surprise teams in all of baseball and deservedly so. They’re playing like a team that’s hungry to play some bonus baseball in October. As for the Giants, they look like a bunch that’s awaiting the team’s fire sale next month and to hear this phrase from commissioner Rob Manfred:

“With the first pick in the 2018 MLB Draft,the San Francisco Giants select…”

It’s sad that this is what it’s come to!

Finally this week, I think one thing that we have to stop using so much, and that’s the term “blockbuster trade.” I hate this,it’s being overused,particularly by sportswriters of a younger age. It’s almost being overused as much as the term “walk off”,which I think should be limited to home runs.

This was NOT a blockbuster trade, Sorry,kids!

I implore all writers and broadcasters everywhere,young and old,to evaluate how you use that term. That trade that happened on Saturday was not one at all. The one you’re going to want to look at for reference is the trade that helped get Kevin Garnett to Boston. The Celtics sent Ryan Gomes, Gerald Green, Al Jefferson, Theo Ratliff and Sebastian Telfair and two first round draft picks in 2009 to Minnesota. The result? The Celtics winning their 17th NBA championship in 2008.

That’s a blockbuster trade. Remember that before you go around using that term as loosely as you have.

That’s all for Odds & Ends this week,stay cool out there,it’s hot as fuck right now!