We lead Odds & Ends this week with this gimmick the Oakland A’s have been doing to try and attract new fans from the other side of the Bay. The Cap Swap was held several times throughout the week at various events in Oakland where “Giants” fans could trade their caps in for a free A’s cap. 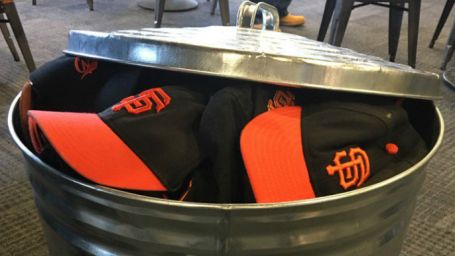 Casual Giants fans could swap success with low-level mediocrity by swapping their SF hat with an A’s hat.

This is one of the newest attempts by A’s president David Kaval to repair the image of the team, a franchise that has seen its popularity dwindle in the last decade due in part to the rise of the San Francisco Giants, who have won three World Series in the 2010s.

I gotta admit that the changes Kaval has made in the image of the team are very noticeable. From the “Rooted in Oakland” sign in the outfield to setting office hours for fans, it’s been a great effort, but unfortunately I think trying to get hardcore Giants fans to join your side is asking too much.

First of all,what self-respecting Giants fan is going to do something like this? They’re already rooting for a successful team that has more to offer in terms of the quality of the product and a top-notch stadium to watch the team play in. Why would any Giants fan decide to trade that for the alternative? That being a team that’s constantly rebuilding by trading players away and playing in a dinosaur of a stadium that has a tarp covering the top deck. Yeah,that’s enough to attract me to your side. NOT!

I also question the authenticity of the event because I don’t know if the people who are trading in the caps are actual Giants fans. They could be employees of the A’s who are posing as Giants fans trading in the caps (which look brand spanking new) for all we know. All I know is that the A’s wouldn’t be doing something like this if they weren’t so bad at marketing previously. The Giants have never had to resort to something like this because they let their own fans decide whether or not they want to root for their product, which many fans want to by a 3 to 1 margin.

I think instead of going after another team’s fan base,how about trying to win back fans who have stayed away from your team because of what they’ve been and have come to represent? How about winning them back? Give them a reason to come back and overall,give them a reason to stick around. You’re getting there,but you have a lot of work left to do.

Speaking of Giants fans…Guys, please do me a favor and quit your sobbing over the first game of the year being a loss. I don’t know if you’re aware of this,but there are 161 games left to go in the season.

I’ll be honest, I didn’t think either the Giants or the Diamondbacks played a game that either team could be proud of. Both teams made mistakes that cost their team dearly.

From Zack Greinke having a bad start to Melancon making fans questioning the team signing him, it was bad all around. In the end, there had to be a winner and unfortunately that was the home team.

Look,if this team was coming off a streak of bad years and they lost the first game of the year,then yeah,you have every right to be upset. But this is a team that’s been to the postseason four times this decade,bringing home three titles in that duration. There’s not a lot of reason to panic right now. Not after one game. Keep your heads up and snap out of it!

Having said all that, there was a huge positive yesterday,though,that being Madison Bumgarner keeping the hashtag #pitcherswhorake a thing of relevance in 2017. Bumgarner hit two home runs in the team’s 6-5 loss to Arizona yesterday and it was a thing of beauty. I joked with a few friends after the first home run that he may lead the team in that category this year,and then he hit the second one to make that a possibility. He is the first pitcher in MLB history to have two home runs on opening day.

Watching Bumgarner pitch is a thing of beauty, but I’ve said in the past,watching him hit is a treat in itself. Why would the National League ever want to abandon the last pure thing about baseball in having the pitcher hit? To me, it’s a puss move too not have them hit. If the excuse is because pitchers don’t hit that well to begin with,maybe they should take a page out of Bumgarner’s book and become a good hitter. You don’t hear him complaining about having to hit. If anything, he’s more than willing ans ready to.

Sidney Crosby and Connor McDavid are top candidates to win the Hart Trophy,given to the NHL’s Most Valuable Player.

just win it. There are many guys in the running,all deserving candidates. From Connor McDavid,who very well might win the Art Ross Trophy to the guy who is the odds-on favorite to win the Calder Trophy,Auston Matthews.

McDavid leads the NHL in points with 94. Matthews leads all rookies in goals scored with 38. Meanwhile,Sidney Crosby in his 12th season leads all NHL players in goals scored with 43. San Jose’s Brent Burns is having one the best seasons for a defenseman with 28 goals and 45 assists and could very well lead the team in scoring,which would be an NHL first.

Sergei Bobrovsky is also being mentioned as a Hart trophy candidate,but he’s more likely to win the Vezina trophy instead (Even though my vote goes to Cam Talbot for that honour). He is,however,having a monster season in Columbus and a big part of why they’re in the postseason this year.

I would love to see McDavid get it,but I have a feeling it will be either Crosby or Burns,just because of the production they’ve put together. Don’t get me wrong,without McDavid,the Oilers wouldn’t be where they are, but he has a lot of time to net a Hart trophy or two before it’s all said and done for him.

Apparently the New England Patriots are meeting free agent running back Adrian Peterson today,and the announcement of it was a bit unusual if you ask me.

Why you ask? It isn’t the Patriot way for them to announce a meeting with a player,especially one who is as accomplished as Peterson. Also,it does make me question their interest in him. I do think they are to an extent, but I would assume they would be as quiet as a mouse in regards to meeting with him.

By them announcing the meeting,it gives other teams a chance to offer him more to go to their team and be the focal point of their running game. In New England I only see him in a reduced role for less money and the chance to be on a roster that could quite possibly win another Super Bowl. Either way, I wouldn’t count on seeing Peterson on the Patriots’ roster anytime soon.

That’s all I’ve got for Odds & Ends this time around,we’ll see you next time!