We begin Odds & Ends with the hiring of FOX broadcast analyst John Lynch to be the new general manager of the San Francisco 49ers.

Lynch,45,spent 15 seasons as a safety in the NFL with the Tampa Bay Buccaneers and Denver Broncos. He won Super Bowl XXXVII with the former in 2002. Since his retirement in 2008 he has been a color analyst for the NFL on Fox and has never held a job in the front office of any team.

The hiring of Lynch is something out of left field for the 49ers to do as they interviewed more established candidates like Eliot Wolf of the Packers and ESPN commentator Louis Riddick. It is also reminiscent of another hire from the booth to the front office when the Lions hired Matt MIllen in 2001,the team never made the playoffs in his tenure there and he left during the team’s 0-16 season in 2008.

Not to say that I think Lynch is the next Millen. Far from that. I’m just surprised that he was hired for the job. Nobody had heard that he was even interviewing for the position,something he apparently wanted to be kept a secret. He hasn’t had any experience in a front office at any level and because of that,it’s a hire that’s expected to draw criticism from fans to the owners wondering what the hell they’re doing yet again.

One thing he has done,however,is having played under a coaching staff that had Kyle Shanahan on it. Shanahan is expected to be hired as the next head coach of the 49ers once the Super Bowl ends.

Who knows? Lynch may just be successful in that role, I certainly wish him well,but it is an odd hire. He has his work cut out for him,that’s for sure.

In a conversation with Colin Cowherd of Fox Sports Radio, NFL commissioner Roger 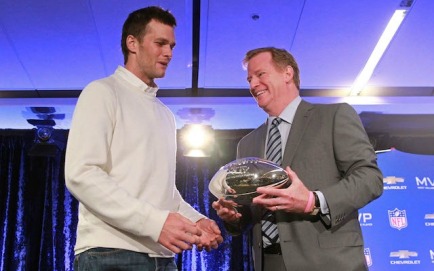 Goodell said that it wouldn’t be awkward if he handed Tom Brady the Lombardi trophy if the Patriots win Super Bowl LI on Sunday.

“Not for a second,” Goodell said. “This is one of the great opportunities. We have two dominant teams playing in the Super Bowl. The Patriots and Falcons have both earned the opportunity to be there. They deserve it and whoever wins that championship is going to have to earn it because these are great teams. I’m going to be thrilled. Tom Brady is one of the all-time greats. He has been for several years. He’s on the precipice of at least potentially winning his fifth Super Bowl ring. He’s an extraordinary player, great performer and surefire Hall of Famer so it would be an honor.”

Goodell has not been a fan favorite in New England after the league’s handling of Deflategate and his insisitence on Brady being suspended four games for it,which took place this year. Goodell didn’t show up for either of the two postseason games hosted in Foxboro and instead went to Atlanta for their final two playoff games before they met up with the Patriots in Houston.

Fans could be heard chanting “Roger, Roger, Roger” and “Where is Roger” at Gillette Stadium during New England’s 36–17 win over Pittsburgh in the AFC Championship Game.

Not that I don’t want to believe the commissioner,but he may be right on about it because I went through a similar situation at work. My office had no power last Monday and as a result I had to go to another office and elected to return to my old office. On my way there,though,I had an ill feeling that it might be an awkward situation because I had left that office after feeling uncomfortable towards the end of my time there. It turned out to be the opposite. I was welcomed, I had a fun time,and was grateful to be reunited with them,even if it was just for a day.

I’m not saying that Brady and Goodell are chums. That’s obviously far from true,but I think these two guys are mature enough to acknowledge one another on that stage if Brady wins his fifth championship. I don’t think Goodell is a good commissioner at all,but I think he can swallow his pride for a minute to present the trophy to the guy who is arguably the best to play his position. 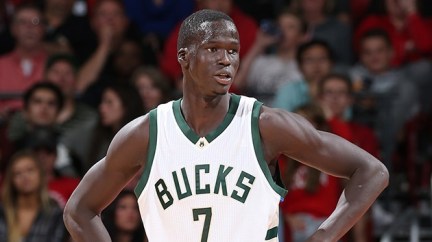 Recent travel bans to seven Muslim-majority countries by the Trump administration have the Milwaukee Bucks concerned over the status of their teammate,rookie center Thon Maker.

Maker was born in Wau, Sudan, which became part of an independent South Sudan in 2011. Sudan is one of the seven banned countries, along with Iran, Iraq, Libya, Somalia, Syria and Yemen.

While Maker moved with his family to Australia in 2002, is a citizen of that country and holds a passport from there, there were concerns for him as the team returned from a Friday night game in Toronto just as U.S. Customs and Border Protection notified airlines about passengers whose visas had been canceled.

Bucks head coach reported that Maker made it to Milwaukee without any trouble. The Bucks do not have any games in Toronto the rest of the season or any other games in other countries.

It isn’t just the Bucks that are concerned,so is the NBA. Spokesperson Mike Bass said this on Saturday concerning the travel ban: “We have reached out to the State Department and are in the process of gathering information to understand how this executive order would apply to players in our league who are from one of the impacted countries. The NBA is a global league, and we are proud to attract the very best players from around the world.”

I applaud the Bucks and the NBA for standing up for their players and looking after their own in this situation. I won’t get into specifics regarding how I personally feel about this,but this ban is proof that it does affect people of all walks of life and that not everyone from these countries that are banned is a bad person. They’re just like you and myself trying to make a living in this country and to have a good life. Nothing more,nothing less.

Finally this week,I want to hear from all of the people who,in 2015, said that the Edmonton Oilers would “ruin” Connor McDavid and ask them if the team has been successful in that task.

Before McDavid was drafted by Edmonton first overall in the 2015 NHL Entry Draft,many

were critical of the team having the pick because everyone knew they were going to select him and he was entering a losing culture where the team had several top picks that weren’t helping the team win, how young talent wasn’t developing there and how he may not get enough exposure on television outside of Canada.

Aside from the Oilers not being on U.S. television, McDavid has squashed the theory that the team has,or ever was going to,ruin him. At age 20,he is the youngest captain in the league and is playing at an MVP-caliber level. He also has his team in a tie for first place in the Pacific Division with 64 points. Last season,the Oilers had 70 points all season long. McDavid hasn’t been ruined in the slightest,nor does he look like a player that’s unhappy to be there. If anything,he’s been their savior. He’s helping to guide them to their first playoff berth in 11 years and if anything,the best is yet to come.

The people who wished ill grace on McDavid going to Edmonton are bitter fans in Toronto who were pissed that the Maple Leafs wasn’t able to win the top pick. I hope they’re over it now that they have Auston Matthews, but honestly, their ill wishes for McDavid were not only terrible,but dead wrong. He is the next best generational player and he’s going to be better and the Oilers will be,too.

That’s all for Odds & Ends this week,we’ll catch you next time!