Today marks the end of a great broadcasting career for the legendary Vin Scully. Today at AT&T Park when the Los Angeles Dodgers play their hated rivals,the San Francisco Giants, will be Scully’s final call.

Scully,88, has been broadcasting for the Dodgers since 1950 when the club was located in Brooklyn,they won their first World Series in 1955 and he then followed the team when they moved to Southern California in 1958 and has been there ever since. The Dodgers have since won five World Series,the last being in 1988. 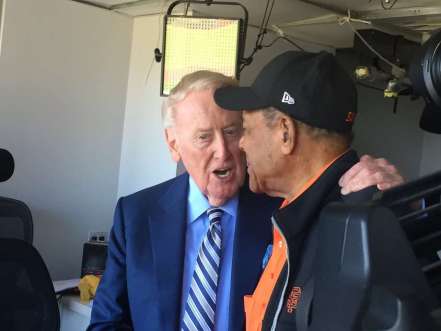 After today’s game,win or lose,one thing is for certain, not only are Dodgers fans going to miss hearing him call games,but so are Giants fans,myself included. On today’s telecast on CSN Bay Area, Scully’s call of the third inning will be heard by all Giants fans who happen to be watching on television.

There are many things Giants fans and Dodgers fans don’t agree on very much,but there is one thing we agree on,and that’s the fact that Vin is the man. Scully is one of those broadcasters who’s just naturally good at what he does. Yes,he works for the Dodgers,but he calls the game as it happens and isn’t critical about the other team. His impact on the game,the Dodgers,and their fans is pretty monumental. The phrase “It’s Time For Dodgers Baseball” is universally known among Dodgers fans as well as baseball fans everywhere. I even saw the acronym “ITFDB” on a vanity license plate while exiting a Southern California grocery store in February. Even Giants broadcaster Jon Miller has been known to imitate Scully on the air,which Scully has taken great delight to.

I think the thing I’ll miss most about Scully is being able to hear him speak. He has a natural broadcaster’s voice that I could listen to all day. If he recorded an album where he just read the phone book, I would buy it because it would sound so beautiful and articulate. Scully has that gift.

Back in May,he mentioned that Willie Mays was the greatest player he ever saw.

“I’ve been fortunate to watch you play all those years,Willie,and I must tell you,not only are you the greatest,but Buck,happy birthday and I will never forget you,” said Scully on Mays’ 85th birthday on May 6.
The two met up again Saturday in the Dodgers’ broadcast booth. Scully said that Mays was his favorite player and joked “even though he wore the wrong uniform.”

Vin,I know Dodgers fans will miss you and never forget you,but those sentiments are shared by this Giants fan who doesn’t necessarily care for the Dodgers, just you.