Ndamukong Suh may be on his way out of Detroit and in another team’s uniform come 2015.

The Lions’ star defensive player will become a free agent after this season and has hinted that he wants to be in New York (Jets or Giants) and feels he can make more of a name for himself if he was playing for a team in the Big Apple. Suh is having a terrific season for the Lions,who are off to a surprising 3-1 start and leading the NFC North by a game.

Suh has had his troubles,on and off the field in the past and has been regarded as one of the league’s dirtiest players, but he is talented and will generate a lot of interest from a lot of teams. The Lions are reported to be okay with that.

I’m confused, wouldn’t the Lions want to retain his services? If they’re not that crazy about him,there may be something more to this than we’re led to believe.

I’m sure their bluff will be called at the end of the season and they’d be willing to offer him a good deal,but they’d be crazy to let him go. As long as he doesn’t go to the Jets,I’m good.

The Oakland Raiders steak of futility continues as they lost their game across the pond Sunday to the Miami Dolphins 38-14. The Raiders are now 0-4 and Dennis Allen is on the hot seat. Allen is 8-28 in his two plus seasons in Oakland.

The Raiders almost beat the New England Patriots in their home last week,but shot themselves in the foot with a holding penalty negating a Darren McFadden touchdown that would have tied the game late in the fourth quarter. In the game against Miami they lost quarterback Derek Carr to an injury to his left ankle. Matt McGloin was sent in to mop up as the Raiders lost their 10th game in a row.

It makes you wonder what this team has to do to turn things around. Nothing seems to work no matter what they try to do. We’re now looking at a 13th straight losing season for this team with no hope in sight for the future. If anyone knows the answer,I’d love to hear it.
Derek Jeter’s final game was Sunday after an illustrious 19-year career. What a week it was for him,and what a career. 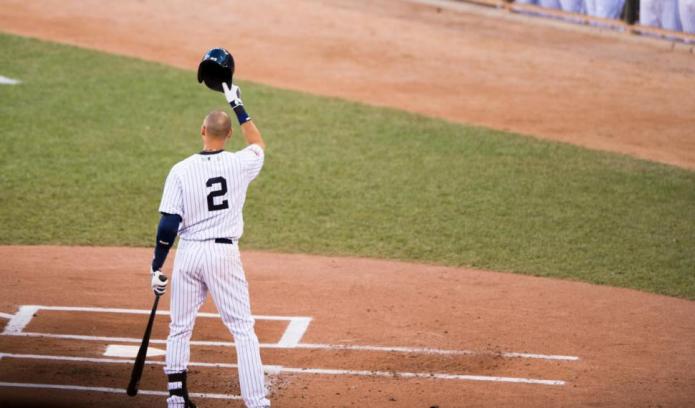 On Thursday was Jeter’s final game in front of the home crowd at Yankee Stadium, where he was the man who provided the game-winning single that helped the Yankees prevail over the Orioles 6-5. After the game,he addressed the crowd.

“I want to thank everyone here,” Jeter,40, began. “I’ve said it time and time again, everyone is chanting ‘Thank you Derek’ and for what? I’m just trying to do my job.”

Jeter even congratulated the Baltimore Orioles on making the playoffs and wished them luck, telling them “they deserved it”.

Jeter then went to Boston to face the Red Sox one last time, but as the designated hitter as a sign of respect to the Red Sox and their fans. The team didn’t do too well in that series, Jeter did get his 3,465th hit,a single in the third and chants of “Derek Jeter” echoed throughout Fenway Park.

Make no mistake about it,Jeter is and has been a special player for not just the Yankees, but for baseball. He made so many great plays and he let his actions do all of the talking. This past year with Jeter retiring has reminded me that there are still some great stand-up guys left in this league. He isn’t the last, but he is the best sportsman the sport has seen in some time. He is going to be missed greatly and I can’t wait to see the last single-numeral jersey be retired at Yankee Stadium, that number belonged to No. 2, Derek Jeter.

The San Francisco Giants will be traveling to Pittsburgh to play the Wild Card game against the Pirates. Madison Bumgarner will pitch against Edinson Volquez on Wednesday.

The team finished with 88 wins,12 more than last season. The season started out great with the team having a 42-21 record (a league best at the time), and the slide began. The team acquired Jake Peavy in a trade with the Boston Red Sox. Rookies like Joe Panik,Andrew Susac,and Matt Duffy were added to the mix and all three guys were unexpected contributors in a big way,helping the Giants get back into the playoff race and in the division race until the final week. They will now play their way to a possible date with the Washington Nationals in the NLDS.

It’s going to be interesting to see what happens with the Giants because the last couple of times they were in the playoffs,they ended the postseason hoisting the Commissioner’s trophy. Is a third time the charm? We’ll see.