The Patriots deserve to be this bad. Honestly. 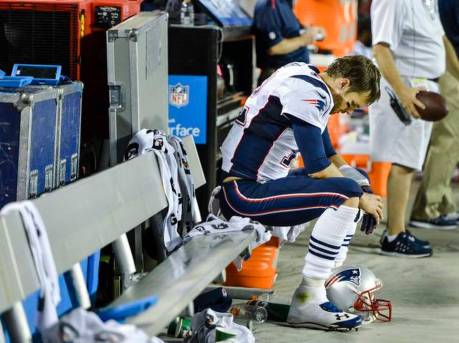 Patriots QB Tom Brady was benched in the team’s 41-14 loss to Kansas City on Sep. 29

I’ve been a Patriots fan for close to two decades now and in my time as a devoted fan of theirs, I have never seen them play so bad as they did Monday night against a Chiefs team that did pretty much whatever they wanted with them. There was absolutely nothing the Patriots did right in that game. Nothing.

They couldn’t get things going offensively when it mattered. Their defense was awful in every facet of it,whether it be the run defense or the pass coverage,they couldn’t stop that offense to save their own lives. The thing that hurts the most to say about all of this,especially coming from me, is this: They deserve to be in this position.

This is exactly what the New England Patriots get for not being aggressive in free agency. Yeah,they got Darrelle Revis, but he hasn’t been the guy I thought he would be thus far. Not only that,but does anyone realistically expect him back next season? I don’t. They have this mindset of “we’ll plug anybody in there and it will work” that was so 10 years ago that it just doesn’t work that way anymore. No longer can you get people like Sterling Moore or James Sanders or Ellis Hobbs and pray for the best. You have to go out and do what the Denver Broncos did: sign guys through free agency. There’s a reason why the Broncos are considered favorites to get back to the Super Bowl and represent the AFC, they’re trying. They bring in guys like T.J. Ward and Aqib Talib and DeMarcus Ware.

They helped their own cause in many ways and you mean to tell me that guys wouldn’t want to come to New England to try and win?
And why couldn’t you trade away for a guy like Larry Fitzgerald and bring him in here so Tom Brady has someone decent to fucking throw to? What? Was a high draft pick too much to give up for him? With the shitty drafts we’ve had in recent years, I could live with giving up a first or second-rounder to have a sure-handed, tall, proven receiver that this team could use to help get them back to the Super Bowl. I freakin’ love Fitzgerald. He’s not only a good football player, but a polite, kind, and well-rounded person. If I was the general manager of the Patriots this offseason, I would’ve given anything to get him. Not getting anyone decent to replace guys like Wes Welker and Randy Moss and even that scumbag Aaron Hernandez is exactly why this team is 2-2 instead of 4-0. Guys like Kembrell Thompkins, Danny Amendola,and Aaron Dobson aren’t going to make the grade.

Not budging in the offseason combined with poor drafts and also trading away people you actually fucking need like Logan Mankins is going to get you exactly where you are. The concern is there with Patriots fans like me. To be honest,it started with the eked-out win over the Raiders last Sunday. I had been telling people that a win in Kansas City might be considered “wishful thinking” because the Chiefs in my mind played well against the Dolphins the week prior in a game I had them losing by a lot. Combine that with the loud crowd Arrowhead Stadium offers each game and you,too,will have a hard time getting your shit together in a game where you needed to do such a thing.

I have a ton of doubt against Cincinnati next weekend where once again they have the chance to humiliate themselves and us fans on national television (this time on NBC). I have little hope at this point for a W, I am even unsure if I will even watch because it’s getting hard to see them perform so bad when for many,many years it’s been a joy to see them play well. Beyond that, the schedule doesn’t let up.