How much Lowe-r can the Oilers go?

As optimistic as I am trying to be that one day my Edmonton Oilers will stop being a shitty team and start being a young and exciting playoff contender, I think one thing has to go for that to happen: Kevin Lowe.

Lowe, who has been the team’s president of hockey operations since 2008, has yet to make the playoffs in that role and since he joined the front office in 2000, the Oilers have made the playoffs only three times, the last being the team’s 2006 appearance in the Stanley Cup Finals. This season was supposed to be different and instead it has been the same old story. As of press time the Oilers are 15-30-6 with 36 points and are last in the Pacific Division. I don’t care what owner Daryl Katz said otherwise to fans in an unsatisfying statement Monday, this is Kevin Lowe’s mess. 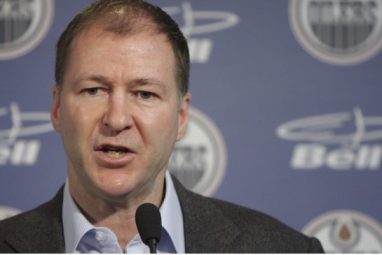 drafted outstanding players like Taylor Hall,Ryan Nugent-Hopkins,and Jordan Eberle, the team has not gelled and the Oilers will inevitably finish their eighth straight season without a playoff berth in a year where they were expected to make noise in a new division and a conference that no longer had the Detroit Red Wings.

Fans have absolutely had enough of Lowe and his managing of the team and this season it has showed. From the fan who tossed his jersey on the ice after a loss to St. Louis to a Facebook fan page distributing bumper stickers reading “This is as Lowe as we go” (One fan received a yearlong ban from Rexall Place after security escorted him away).

Kevin Lowe’s situation in his role with the Oilers reminds me a lot of Matt Millen’s when he was CEO of the Detroit Lions from 2001-2008. Like Lowe, Millen had a lot of success in his career, winning multiple Super Bowls (as Lowe won six Stanley Cups) and was a popular analyst on television who knew the game well. Once Millen got to Detroit, he made one bad decision after another, one bad draft pick after another and the fanbase was fueled with anger and disappointment. It got to a point in Detroit where fans held a walkout during a game and even once wore the color of an opposing team,the Cincinnati Bengals, in protest to Millen’s performance as CEO of the their team.

I think if Lowe were fired by the Oilers,it would be a popular decision with the public and a breath of fresh air so long as they get the right person in place who not only can make good hockey decisions, but also can bring a winning culture back to Edmonton. There comes a time when a guy has to go if he is not getting results from a team that should be getting them and in Edmonton, Lowe’s the guy.

This eight year drought of no playoff appearances is absolutely frustrating for all Oilers fans,especially me since I live in the backyard of a team whose fan base thinks their team is so great despite never getting to a Stanley Cup final in their entire history.

If I was in the position Lowe is in now and was not getting results, I wouldn’t last long. Just sayin…