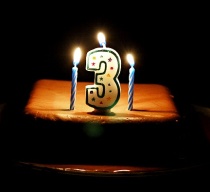 Today is the third anniversary of the T.J. the Sports Geek blog. This crazy nonsense all started back on Feb. 10,2010 when the blog was known as All Things Orange, a general purpose/entertainment blog. Our first post was this review of the Carl’s Jr. Grilled Cheese Bacon Burger. The blog didn’t start out to be anything special, probably because I was writing about everything and was trying to find my niche. I think I did when we switched to sports and in June of that year, I decided to rename it after me, T.J. the Sports Geek. I still write other stuff from time to time just so the casual or non sports fans have something to read as well.

After 106 columns, 23 Top 8 lists, 38 reviews,three editions of the Things That Need to Go list, seven Tales of the Tape, and over 45,000 views, I am just getting started. I’ll still be doing all the same features you know and love, but won’t be afraid to do something new. I will still cover local sports teams but if a story happens elsewhere, I will get to that,too.

We also will be approaching our 50,000th view this year and will commemorate that somehow. It’s looking to be a great 2013 for the blog and I hope you come along for the ride.