The check has arrived, but where are Joe and Gavin? 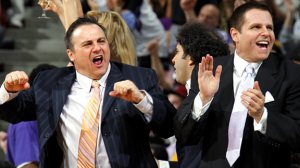 The Maloof family is currently whining over paying a measly $3.2 million in pre-development costs in building a new arena in downtown Sacramento.

Is anyone else in Sacramento getting seriously sick of these guys?

Here we go again. Anytime it seems like the arena deal for the Kings gets momentum, the Maloofs do everything they can to kill it.

If you don’t know, the Maloof family is refusing to pay $3.2 million in pre-development costs for the new arena. Yes, that’s right, $3.2 million, something 29 other NBA owners would probably have no problem shelling out if they claimed to be “on board” in helping to fund a new arena. David Stern says he will put up $200,000 in pre-development costs that the Maloofs are currently whining and bitching about.

But wait, aren’t these guys billionaires?

Oh,yeah,that’s right,this was 2006, things have gotten worse since then. My bad, moving on…

I’ve said it time and time again, the Maloofs are absolutely terrible owners. They have been bad for the league, bad for the Kings,and bad for the city of Sacramento. Talks of building a new arena have been going on for over a decade now and talk is cheap. If the Maloof family was any bit serious about building a new arena in downtown Sacramento, we’d be seeing games in it right now. Everything was going along smoothly ever since the announcement in late February until these jokers threw up their arms yet again in disgust over a couple of bucks.

These guys seriously remind me of friends you go out to dinner with who scoff about having to pay their share of the bill when they knew good and well what they’ve ordered. That’s exactly what’s happening here. They ordered the pizookie and it costs $3.2 million. Pay up,boys!

I don’t know much about Ron Burkle, the businessman who was interested in purchasing the team last year in an attempt to rescue it and save it from moving to Anaheim and also has a stake in the Pittsburgh Penguins,but had he succeeded in doing so, I have to think that he would have no problem with a $3.2 million pre-development fee. Burkle is the kind of guy the Kings,the NBA, and more importantly, the city of Sacramento need to be the owner of this team. If there’s any possibility the NBA would allow Burkle to somehow buy this team, they should. I’m sure David Stern has had enough of the Maloof family’s temper tantrums just and you and I have and I’m sure he would like to see an ownership group that really wants to be here.

I’m not declaring the arena deal dead yet and neither is anyone else. I’m as hopeful as the commissioner that this project can and will continue. Who owns the team at the end of it is another story.