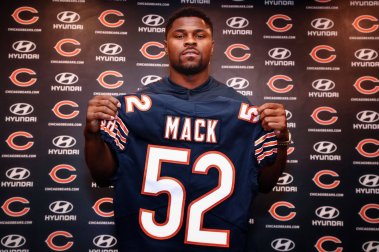 Mack,27,the first reigning Defensive Player of the Year to be traded after winning the award since Jason Taylor in 2008,later signed the contract extension he wanted with the Raiders with the Bears,a six-year,$141 million deal. He now joins a Bears defense that includes this year’s eighth overall pick Roquan Smith, who had a holdout of his own this offseason before signing his rookie contract, and 2016 ninth overall pick Leonard Floyd. Chicago ranked ninth in points allowed and 10th in yards allowed last season.

The move left a lot of Raiders fans and even some of Mack’s former teammates stunned,most notably Derek Carr and Bruce Irvin.

This is the sucky part of this business… Mornings like this, but we have a season to play and games to win!! #RaiderNation we feel your pain trust me but we need you next Monday night! 💀

What a shock. Now move on and win.. time to beat the Rams!!

I honestly think this move is every bit of a win for the Bears. They get a player who is in the prime of his career and who’ll make their defense even better with this move. I don’t think it makes them that much better in the standings,but teams in their division are on watch now that the league’s top defender is in their division. While yes,the Raiders did get a lot in terms of future assets in return, there’s no guarantee that they’ll pan out even remotely as great as Mack did for them. For the Oakland/Las Vegas/Narnia/Funkytown Raiders,only time will tell if they’ll prosper from trading one of their best away just like that.

Now,let’s move on to the front office and what their motives are going forward as a franchise. The Mack trade is certainly not a fan friendly one in that they’re a team that’s packing up the moving trucks as we speak to Las Vegas and will likely begin play there next season while their new home is under construction. It tells me that the team isn’t willing to keep players who were drafted during their time in Oakland and that they want to draft players who will be playing in Las Vegas instead and reward those players when the time comes in lieu of rewarding who is there now. 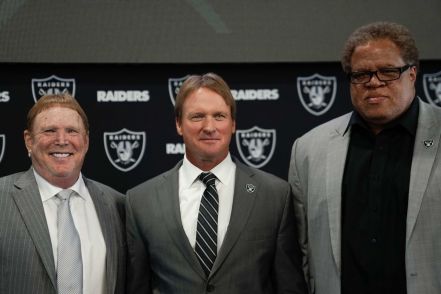 You can also bring it back to when they hired Jon Gruden back earlier this year and gave him a shitload of money and long-term deal. It says to me that Reggie McKenzie and Mark Davis are willing to pay top dollar for a coach who is just above mediocre overall and in the postseason,but not for the reigning defensive player of the year playing on a weak defensive team. It makes you wonder where their true prioirities lie and how good their decision making really is.

The front office really whiffed on this one and I don’t think they’re going to recover from it anytime soon. But whatever, they’re busy packing,so I’m going to leave them be for the moment. 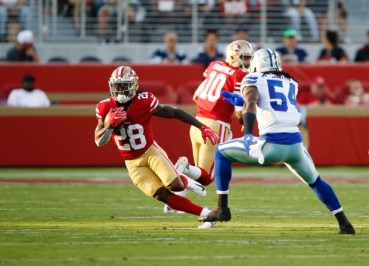 The season has come to an end for 49ers tailback Jerick McKinnon. The 26-year-old suffered an ACL team while making a cut on the last play of practice Saturday, the team confirmed Saturday.

The 49ers signed McKinnon to a four-year, $30 million deal in the offseason and had hopes of making him one of the focal points of their offense after playing decently in Minnesota last season. The injury came just before teams had to trim their rosters to the league-mandated 53 players.

For now,the 49ers will have Alfred Morris and Matt Breida to shoulder the load at that position,something they were both expected to do with McKinnon healthy.
With McKinnon lost for 2018, 49ers general manager John Lynch is still optimistic about the roster they’re fielding this season.

“We’ve got a lot of good football players here,” Lynch said. “We’re proud of our 53-man roster, and next week we’re going to be really excited looking to take on the Vikings.”
I think the 49ers will be just fine with their current lineup. I like McKinnon,but he was only part of what the team was going to work with in the backfield. He’s not a guy who can be or is able to carry the load all by himself. Morris is and has been a proven rusher who can run for big gains and has high averages in yards per carry and Breida has potential to be good as well. Those two will be given a chance to give the team what it needs on offense,one that I think will be very good. 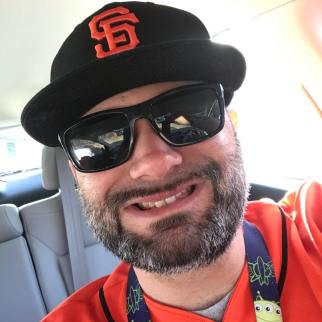 Finally this week,I want to apologize for not writing on here as much the last couple of months as I have previously. Life has been crazy busy with work and with being at work as much as six days a week some weeks and beyond that time with friends and family has eaten my ability to come on and write about sports and other stuff for all of you.

That being said,we not only have today’s edition of Odds & Ends which you’re currently reading and hopefully enjoying,but also Pigskin Picks are back this Thursday and will be up until Super Bowl week, I also have my NHL Season Preview which will be up on Sep. 27 and my NBA Season Preview on Oct. 6 (which is being moved up a little earlier than usual because I will be on vacation the weeks after that). So there’s a lot coming up that I hope you’ll be as excited for as I am and I hope you understand why I’ve been as missing as I have been.

That’s it for this week’s Odds & Ends,until next time!