Odds & Ends this week will begin with the Giancarlo Stanton sweepstakes heating up with now four participants hoping to acquire the four-time All-Star slugger. The Giants,Phillies,Red Sox,and Cardinals are reported to be the most interested with the Giants being considered the favorites.

Many are wondering two things: Why Stanton would want to go there and what the Giants would have to give up to bring him to San Francisco.

First off,why would Stanton not want to go there? To a team that’s won three World series trophies this decade with a talented infield and very good pitching and a ballpark where he’s actually hit very well. What’s not to like? Yes,they lost 98 games this year,but many feel that this was a fluke year where a lot went wrong in terms of injuries, bad trades (or lack of any action to bring quality players to the team), and poor play on the field. They also feel that a lot of ingredients are leftover from the championship years that can help them get back on track and that a key piece that can help is bringing Stanton on board. Also,the Giants have players they can send to Miami and another team may get on board to make it a multi-team deal.

Will the Giants end up with him? It’s hard to say,especially with three other teams wanting him,too. I hope they do,but won’t be entirely surprised if they don’t and won’t be surprised if they go another route and go with a lesser player. You know,like they always do.

The San Francisco 49ers won their first game of the season on Sunday against the New York Giants at Levi’s Stadium after starting the season with nine consecutive losses,a franchise record. This is also the first win for head coach Kyle Shanahan,who is in his first year in that role.

“You lose nine in a row, you learn to savor the moment and enjoy these,” Shanahan said.

San Francisco rookie quarterback C.J. Beathard threw for 288 yards and two touchdowns and ran for a third score in his team’s 31-21 win.

The 49ers now have a bye week and will host the Seattle Seahawks in Week 12.

I have a lot of friends who are 49ers fans and I’m absolutely happy for them that their team got the win. Yes,it was against a terrible Giants team (more on them in the column), but hey,any win is a win at this point. This team is in full rebuild mode and any win they can get is a sweet one. To those fans who are cheering for them to go winless, how are you feeling now?

This is the best segway to my next story about how I’ve long disliked when fans get championship tattoos before it happens when it ends up not happening. It’s not happened in reverse.

A local radio station in the Bay Area last week offered up 0-16 tattoos for fans who wanted one. As mentioned prior,the 49ers won yesterday,making an 0-16 season an impossibility and their “commemorative” ink a waste of time.

It’s embarrassing when say,a Los Angeles Dodgers fan gets a tattoo commemorating their World Series win this year,but it’s even more embarrassing when you get a tattoo of this sort embracing futility. I not only wonder how they’re going to feel in 10 years or so,but also how they’re feeling today about getting them. Fans, if your team isn’t hoisting up a trophy, don’t get a tattoo saying they did,and if they’re getting the first overall pick and go in reverse perfection, don’t commemorate that. You play to win the game!

At,1-8, the New York Giants have had a rough year when expectations were very high going into the season. It’s come to a point now where head coach Ben McAdoo’s job security is in possible jeopardy.

Reports coming from sources close to the team cite that McAdoo has lost the locker room and that players are quitting on him and the rest of this season. McAdoo is 11-10 in a season and a half as the head coach in New York.

Hours after the game ESPN’s Josina Anderson reported that a Giants source texted her,

“Tried to warn you” of Sunday’s listless performance. The Giants flew home immediately after the defeat and were due to land in the early hours of Monday morning, according to the New York Daily News.

I wish I could say I’m surprised about this,but you could see this happening the moment that several players went down to Miami and partied on a boat with Justin Bieber before the playoffs. This team has no discipline,no will to win,and no heart. Say what you will about Tom Coughlin and how tough he was,but at least he held players accountable and they had some direction. It doesn’t feel that way now with them and I’m not saying it’s all on McAdoo, but when you’re 1-8 in a year with expectations as high as theirs were, players,coaches,and front office people need to be held accountable and to have some self-discipline. Maybe if the Giants had a coach who could get through to these people,they’d probably be in a much better place.

Finally this week we have some sad news to bring to you regarding 49ers wide receiver Marquise Goodwin. He and his wife lost their newborn baby due to pregnancy 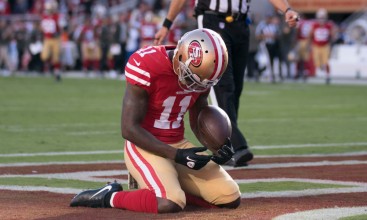 “Unfortunately, we lost our baby boy due to some complications, and had to prematurely deliver him early this morning around 4 a.m.,” Goodwin wrote. “Although we are hurt, I am grateful for the experience and grateful that God blessed me with a wife as courageous and resilient as Morgan.”

“The pain (physically, mentally & emotionally) that she has endured is unbelievable. Please pray for the Goodwin family.”

A heavy-hearted Goodwin played in Sunday’s game against the Giants and had a touchdown catch of 83 yards. Goodwin blew a kiss to the sky before he crossed the goal line and upon reaching the end zone, Goodwin knelt to the ground and prayed with teammates surrounding him.

Goodwin quickly exited the locker room after the game to return to his family.

I don’t have any children,but I couldn’t imagine what Goodwin and his family are going through. But for him to show up to play shows how courageous he is to do his job in what has to be the worst day of his life as well as his family’s. I wish him and his family all the best and am very sorry for their loss.