Conor Gillaspie has been designated for assignment following the return of outfielder Jarrett Parker and recall of Ryder Jones from Sacramento.

This was Gillaspie’s second stint with the Giants and that second act brought a lot to the team in terms of success and to the fans a great postseason performance.

In the 2016 Wild Card game against the New York Mets, he hit a three-run homer in the top of the ninth inning off of Juerys Familia to break a 3-0 tie and give the Giants a win to move on to the next round. He also had a go-ahead triple in the third game of the National Lague Division Series against the Cubs that was a key part of the team’s lone win of the series,which gave birth to the famous tweet by Giants broadcaster Dave Flemming:

Gillaspie’s unfortunate exit comes at the expense of what is and has been a bad season for the Giants as they’ve fallen beyond short of expectations where postseason hopes have turned into bringing in youth to energize the roster. I,for one,am not pleased to see him leave yet again. He’s worked very hard to get back to the majors and the Giants and for him to be gone because the team is continuously bringing up younger talent and is as a result a casualty of a bad year really sucks. I do appreciate all he did for the time he was here.

If you’ve read Odds & Ends before,or even other articles, you know that I love it when a pitcher comes up with a big hit,which is what I love most about National League baseball. From time to time,you’ll see my San Francisco Giants and their pitchers coming 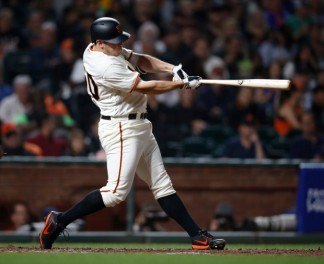 up with a home run batting in the ninth spot. Whether it be Madison Bumgarner or Jeff Samardzija or Matt Cain, it’s fun watching a pitcher who can rake. Add another to that list,Ty Blach.

In addition to pitching a gem of a game on Thursday against the A’s (an 11-2 Giants win) where he pitched eight solid innings on 104 pitches allowing six hits, Blach launched a three-run homer in the fifth inning to give San Francisco a 11-1 lead. If that didn’t blow you away,this might: that was the first three-run homer by a Giants hitter all season.

This is why I love the National League and why they don’t need a designated hitter. Ever. Pitchers raking,although rare,are fun to see. Beyond that, it’s the exclamation point to their own cause,which is to get a win and they can do it on the mound,or at the plate. I love that! That’s how baseball should be played.

search of help at quarterback. Well,sort of.

In Miami,Ryan Tannehill is possibly looking at season-ending knee surgery after injuring his left knee in practice on Thursday. You may remember that Tannehill also injured his left ACL and MCL that ended his 2016 campaign after 13 games,prompting back-up Matt Moore to fill in for him for the rest of the year,including the Dolphins’ first playoff game since 2008.

Since Tannehill may be lost for 2017, the team needs to sign a quarterback. They had a lot of options to go to as well. Quarterbacks like Robert Griffin III, Colin Kaepernick,and even Shaun Hill were on the market (and still are), but the team opted to get one out of the quarterback retirement home.

Cutler signed a one-year deal to be in Miami and delay his broadcasting career with Fox Sports.

Seriously? You want this guy to try and get you back to the postseason? He can’t get you more touchdowns than interceptions in a game. This is why the New England Patriots win the AFC East year after year after year,because their conference rivals can’t stop making shitty moves and in this case,go after a younger quarterback who isn’t as bad as Cutler. Honestly,you’re better off giving Moore the keys to the office door instead and maybe signing Hill or somebody not named Jay Cutler to back him up. Anyone but Cutler, yeesh!

Meanwhile in Indianapolis,Andrew Luck is possibly heading to the PUP list (physically unable to perform) after suffering a shoulder injury. He’s currently on the preseason 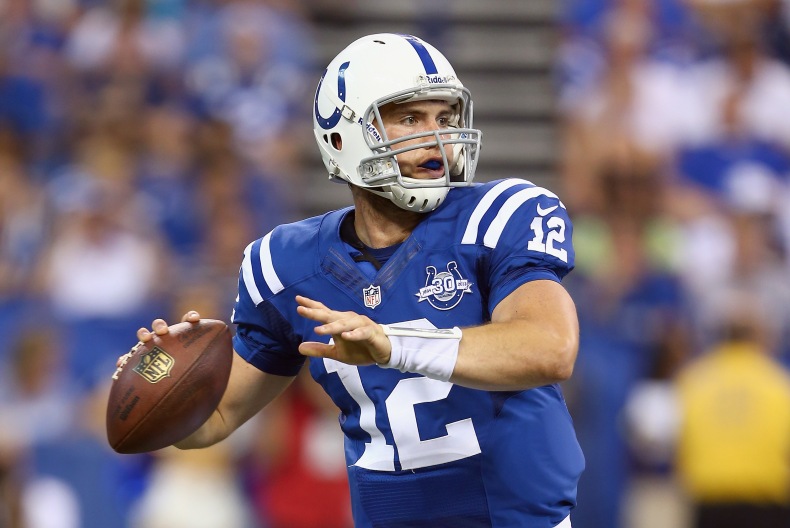 version of the list and being monitored daily before they can determine if he can return to practice. Should he head to the regular season PUP, he would miss at least six games.
So the Colts would be turning to Scott Tolzien in the interim while Luck recovers from his injury.

Tolzien has only nine career appearances in a game and only 937 passing yards. The other two quarterbacks on the depth chart have little to no experience. It’s doubtful that the team will sign anyone off the street if Luck is slated to return in six weeks.

However,this is a make or break season for coach Chuck Pagano if the Colts miss the playoffs for a third straight season. It’s very possible that Luck doesn’t miss any time with his injury,but if you’re Pagano,you have to be worried about your star player being hurt again and out for a period of time,especially if you’re trying to make the playoffs in a winnable division.-

Finally, moving on to hockey, longtime NHL-er Jaromir Jagr,45,is still wanting to play and further his long-successful career and is still without a home.

One journalist is speculating that the San Jose Sharks may be a destination for Jagr after Patrick Marleau left to go to Toronto. Jagr has also played for coach Peter DeBoer when the two were in New Jersey and DeBoer does like players he is already familiar with.
Jagr is definitely not as high scoring as Marleau or as fast as Joe Thornton,but he does have great game vision like Thornton does.

I think Jagr will be on an NHL roster before the season starts,I just don’t think it should be this one. The youth movement in San Jose needs to finally take place. If you saw them against the much younger Oilers in the first round, they looked old. There’s no other way to say it. This team,while very talented as is, needs younger talent and Jagr is far from being a puppy.

Don’t get me wrong,I think in terms of mentorship he would be great,but if you’re adding him as a piece to try and get you back to a Stanley Cup final,I don’t think that’s going to be viable. That’s just asking to be bounced from the first round yet again.

That’s all for Odds & Ends this time,have a great weekend,everybody!

On the brink of moving into their shared new stadium […]
Reviewing the new Los Angeles Chargers Uniforms
%d bloggers like this: