We begin this edition of Odds & Ends with the crazy (and stupid) notion from ESPN’s own Kevin Pelton that the Sacramento Kings had the 28th best draft this year,which would equal for the worst one out of all teams that had picks (The Wizards and Cavaliers didn’t have any picks this year).

Pelton says that while the Kings had a fascinating draft,but rated at the bottom of his list based on something called WARP (wins above replacement player). Whatever that means!

Meanwhile,he had the Lakers,Nuggets,and Nets as his top three winners in the draft while Boston and Oklahoma City joined Sacramento at the bottom of his list for worst drafts.

I understand that this is one person’s opinion on the draft,but it’s ultimately a stupid one. Everyone else was very high on the Kings for this draft, saying they either won it or were one of the winners of the night. Ultimately,I think this is another ESPN schmuck who doesn’t like the Kings and is probably obeying his employer’s main operative of trumping up teams that the network likes such as the Lakers and having him talk nice about them no matter what.

This is kind of why nobody wants to watch,or even like,ESPN anymore. Even when a team like the Kings has an incredible draft,probably the best one they’ve had in their history, they still can’t give the team credit.

I’ve heard from others that this guy is kind of a joke and doesn’t truly know NBA talent as well as anyone (including him) thinks he does,so I’m going to pretty much disregard it and enjoy what the future has in store for my favorite team with these four rookies on this roster.

players having worn #0 in college, it’s been debated over whether either player can continue wearing that number with the Kings due to Willie Cauley-Stein wearing #00. Fans aren’t sure if #00 and #0 are the same number and if you can have both those numbers on the roster.

I’m here to end that debate right here and now to tell that yes,you can have both numbers on your roster.

Was it always that way? No. In the past, there were players who changed their numbers if they had one zero or both,but nowadays teams have carried both variations of the number. In Indiana,C.J. Miles wore 0 and Aaron Brooks wore 00. In Denver, we had both Emmanuel Mudiay wearing 0 and Darrell Arthur wearing his familiar 00. And in Cleveland Kevin Love wears 0 and in the past Chris Andersen wore 00 when he was there last season.

Also,when I was coaching basketball for a youth group that I was an advisor for, we had #00 and #0 player jerseys made.

This shouldn’t even be a debate, these are two different numbers that officials can differentiate quite easily when making a foul call. It’s not rocket science,people. Fox or Mason will be able to wear that number along with Cauley-Stein. Nothing to worry about. Now let’s step aside so those two players can ro-sham-bo for it. 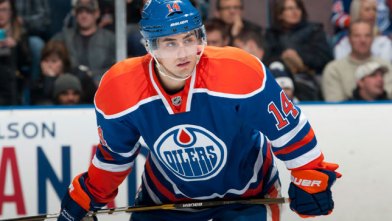 Eberle was Edmonton’s first round pick in 2008 by Edmonton and in 2010 he made his NHL debut and had a fast start to his career. It looked as though he would be a big part of the team’s eventual revival. It took seven years for that revival to come.

He had a great sophomore season and was the first Edmonton player to score 30 goals since Ryan Smyth. After lighting it up in the AHL during the lockout shortened 2012-13 season,Eberle’s stats were never the same. Combine that with the front office being a mess, the team going through coach after coach, it was apparent that he and former teammate Taylor Hall were lacking in the accountability department because they never took any nor was someone there to make sure they did.

I think by the time the Oilers were eliminated from playoff contention in 2015-16, he and Hall fell into bad habits. However,this past season Eberle did make an effort to try and adapt to the game plan of the team and even play better defensively. However, when the playoffs came around for the first time 11 seasons for the Oilers,Eberle was invisible and nowhere to be found.

I think his poor performance in his lone playoff season in Edmonton was what jettisoned him out of town. That,and his $6 million a year salary. Honestly,it’s probably for the best for both him and the team. He barely got 20 goals this past season and he just isn’t a fit for what the Oilers are trying to do. I’d rather have a guy who’s making less money do what Eberle didn’t do if you ask me then to have a guy who’s playing alongside the league MVP and not doing what’s expected of him. I wish Eberle well,but there are bigger things at stake for this team as the expectations keep growing for them.

On to baseball and the lovable losers known as the San Francisco Giants and to ask everyone this: Is this team really going to lose 100 games? 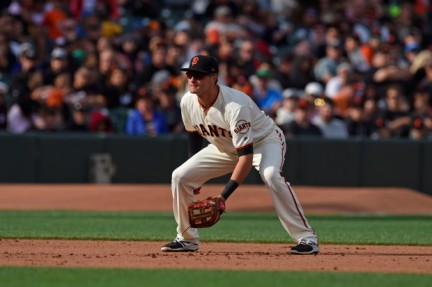 Is it time for Ryder Jones and other prospects to get an opportunity in a down season? Perhaps it is!

The Giants have lost 12 of their last 13 games,have 51 losses on the season,and we’re still a few weeks away from the All-Star break. This is a team,by the way,that was expected to compete in postseason play. It’s come to the point where the team is bringing up guys like Ryder Jones and Austin Slater from AAA Sacramento.

Should it happen,the Giants will join the 1985 squad with as many losses in a season and could be as far back as 33 games of their hated rivals,the Los Angeles Dodgers,in the division standings. Some could say this downward spiral started in 2016 in the second half with the team collapsing hard and eventually sputtering into the postseason.

The offense is 27th in batting average, 27th in runs scored,and dead last in home runs,and this isn’t an epidemic that’s nothing new. It’s been plaguing this team for years (even during the good years) and not much has been done to correct it.

It seems to me that this team needs to go in a different direction. These young players the team has been nurturing in Sacramento probably need to come up and some of these veterans need to be shipped off for prospects that can help this team in the not-so distant future to teams that could use their services as they prepare to contend for October.
Do I think they’ll hit that 100 loss mark? My heart wants to say no,but I know my head is saying yes. This team is and has been underperforming and it’s been disappointing and to a point,unacceptable.

Which leads me to this,where is the accountability in the front office in regards to how this roster for 2017 was built?

I’m gonna continue to harp on this for a while,but why was Mark Melancon the only 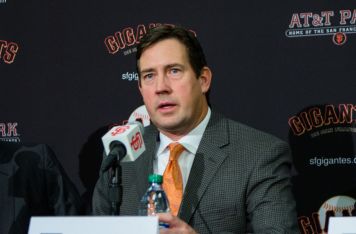 Had I been in Evans’ place,I’d have done everything possible to try and attract a trade for an outfielder or some bullpen help. That didn’t happen and as a result,players like Gorkys Hernandez and Aaron Hill are on this team,and guys like Chris Marrero were as well. The team also signed former All-Star Melvin Upton,Jr. to see if he has one more spark left back in April and he is still in Sacramento.

Honestly,if there’s anyone who needs to be held accountable as much as the players,it’s this front office,and Evans is looking more and more like someone who wasn’t good enough to succeed Brian Sabean as general manager. I’m not even convinced that’s he capable of conducting the right fire sale for this team,that’s how bad he is and that’s how bad it’s been this season in San Francisco.

San Francisco’s front office had a $172 million payroll this year and there’s nothing to show for it other than disappointment, frustration,anger,and dashed hopes for this team to be any good in 2017. It’s time for fresh voices and players that fit this system and can hit in this ballpark. After all,their opponents seem to be capable of it.

That’s all I have for this edition,we’ll see you next time!