We begin Odds & Ends with the Edmonton Oilers outlasting the San Jose Sharks in the quarterfinals of the Stanley Cup Playoffs, eliminating the Sharks in six games and moving on to the second round where they will face another Pacific division foe, the Anaheim Ducks.

Edmonton’s Anton Slepyshev is on the breakaway and nets one past San Jose goaltender Martin Jones.

After a scoreless first period,the Oilers started scoring right away in the second period where Leon Draisaitl netted his first goal of the playoffs to open the Edmonton scoring. Fifty-six seconds later Anton Slepyshev went in unassisted for the Oilers’ second score.

Patrick Marleau got the Sharks in the scoring column and cut the lead in half with 12 minutes left in the game and Joe Pavelski nearly tied the game with a shot that hit off the crossbar and a post.

Connor McDavid sealed the door shut with an empty net goal to give Edmonton the 3-1 lead and the game and the series win.

This is Edmonton’s first playoff series win since they were last in the playoffs in 2006.

“It’s tough to be up two and give up a goal with seven minutes to go. That’s stressful,” said McDavid, “I think we’re a little bit more mature than people give us credit for and I think we showed that tonight.” 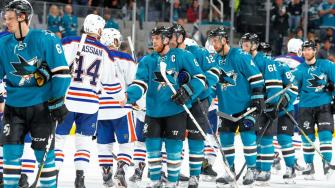 As for the Sharks, this defeat is a disappointing one as they were in the Stanley Cup Finals last season,only to lose that series to the Pittsburgh Penguins in six games. San Jose stumbled into the playoffs only winning four of their final 10 games after having a gigantic lead in the Pacific division in the final month.

“My gut feeling is we ran out of gas in the last month,” Sharks coach Peter DeBoer said. “It’s just a reality.” 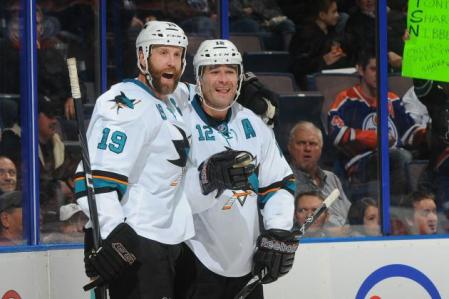 Now that the Sharks are out of the postseason earlier than they and their fans probably expected,one has to wonder what is in store for their future and if that includes longtime players Patrick Marleau and Joe Thornton having a role in it.

Both men turn 38 this year and are free agents and the team has a lot of talent waiting in the wings in the AHL who are ready to come up to the big team.

Thornton didn’t arrive to the postseason until Game Three against Edmonton due to a leg injury while Marleau did lead the team in scoring in the series with three goals.
Marleau described Thornton as skating around on, “one leg.”

Doug Wilson has a lot of tough decisions to make regarding those two, as well as having possible players such as Joel Ward and Paul Martin be available to the Vegas Golden Knights in the expansion draft. Thornton and Marleau have both wished to keep playing and it’s a safe bet to say that they want to remain in teal and black.

I think it may be time to move on from those two players. Yes,they’re both beloved players and have a place in Sharks lore as their two best players of all time,but as you saw against the Oilers, this team looked old and out of gas and while they gave the Oilers everything they had, the thing that was lacking a lot on this roster was youth.

I think if Marleau and Thornton are gone,they should be on a roster geared towards winning a Stanley Cup. It wouldn’t surprise me to see either of them on a team like the Capitals or the Rangers or the Blackhawks or even a younger team like the Maple Leafs. They do deserve a chance to win a Stanley Cup even if it isn’t in San Jose and the Sharks deserve a chance to include a younger roster that has a chance to win a championship someday.

Looking ahead to the next round with Edmonton and Anaheim, this is a match-up I

thought we would see in the quarterfinals,but alas we see these two Pacific division clubs playing each other in the semifinals.

This is going to be an interesting match-up with the line of Ryan Kesler that’s going to be seeing a lot of McDavid. These are also two teams that had scarse power play opportunities. The Oilers,save for Game 4 of the quarterfinals, were excellent on the penalty kill.

I feel the goaltending edge goes to Talbot because of the workhorse he is and has been. He had two shutouts in the quarterfinals. John Gibson had a shaky spell earlier in the year,but is still the top netminder on the team. Jonathan Bernier,though,is a solid back-up.

Anaheim comes into this series knowing that their next opponent is nothing like their last one,the Calgary Flames.

“There’s not going to be many more sweeps, I don’t think,” Anaheim defenseman Kevin Bieksa said.

The Ducks have been stellar at home as of late, going 13-0-1,making it a house of horrors of sorts. The Oilers’ home,Rogers Place,has been a source of electricity for the team courtesy of the fans. From the crowd singing “O Canada” at the top of their lungs to the passion and fervor they have throughout the game, it’s been a treat to see these fans have this kind of love show for their team,and the team appreciates it right back.

“It’s going to be wild in Edmonton,” Anaheim forward Andrew Cogliano said. “It’s exciting. Their fans are ready for this moment. They’ve been ready for this for a long time, and I think they’re going to embrace it. We should have fun with it.

If Edmonton is going to win this series, I think it’s going to take all seven games and I’m going to go ahead and predict that knowing that I could be absolutely wrong. However, faith in my team is at an all-time high right now and I think they can hang with a team like the Ducks.

The San Francisco Giants are currently 6-13 and looking like a team that failed to make the postseason last year.

The Giants were swept by the Colorado Rockies this weekend for the first time since 2002 at Coors Field and have lost seven of their last 10 games. They’re also in possession of the worst record in the National League.

Gorkys Hernandez’s days in San Francisco may be numbered.

“What you have to careful of — you can’t let any kind of complacency set in and say, ‘It’s early, we’ll be ok.’ I don’t want to hear that either,” Giants manager Bruce Bochy said. “It’s the old adage that you come out with some sense of urgency. All these games are important. You’ve got to stay away from that attitude, too: ‘We’re not through April yet and have 140-something games left.’ That doesn’t work out.”

Bochy’s right,some sense of urgency needs to be with this team. I understand that these guys are battling injuries, that their star pitcher/face of the franchise fell off a dirtbike and will miss significant time, but these guys have to pull together.

Having said all that, the front office needs to make some moves and they need to do it fast. If I was general manager Bobby Evans, the first move I would make is to designate outfielder Gorkys Hernandez for assignment.

I don’t have any idea why this guy is on the team at all. He has missed so many catches in center field and is hitting like shit (.088 in 2017) that it makes you not want to watch whenever he’s in the lineup. In fact,I’ve made it a point not to when he’s playing.

If Drew Stubbs is ready,get him up here. We all know Christian Arroyo is ready, get his ass up here. I think you can place him at third and have Eduardo Nunez in left and Stubbs in center.

I also think the batting order needs to be revamped. I think Joe Panik needs to be the guy batting second. I think he’s more productive at that spot and where he fits in best. I also think once Brandon Crawford’s family matters are dealt with he should be in the fifth spot behind Posey. I’m tired of seeing him in the sixth or seventh spot, he deserves better and is better than this.

Also,Evans needs to get on the phone to make a trade. What type of trade he’s going to make is up to him,but overall,this team needs help.