Need to Go in 2017 list next month; their general manager.

Regarding the club’s lack of trying to put a competitive roster on the field, Trent Baalke said that ownership is far from the reason to blame for not doing so despite the club being $41 million under the salary cap and being mostly inactive during the offseason in terms of free agency.

“The bottom line is, the ownership gives us everything we need to be successful – everything we need,” Baalke said, “There’s nothing financial holding us back from being successful. And they’re extremely supportive. They let us make football decisions. They support them wholeheartedly. And they give us every resource necessary to do it. So that’s what’s frustrating. If people want to push blame, find it, look right here, because I’m given everything I need to be successful in the job I’m doing. Period.”

Really,Trent? You’re given everything you need? Then explain to me and your fan base why your squad is 1-8. Explain to your fans why you don’t have a quarterback who’s more interested in being a social justice warrior than a competent NFL quarterback. Explain to them why this team is worth spending a day at your shithole stadium and getting severely sunburned. I think this man is highly delusional if he feels he’s given all he needs to have this team being competitive and good when in fact they aren’t and are challenging the Cleveland Browns for the rights to draft first overall next April (Though I will say the Browns are giving the 49ers a run for their money in terms of draft order). 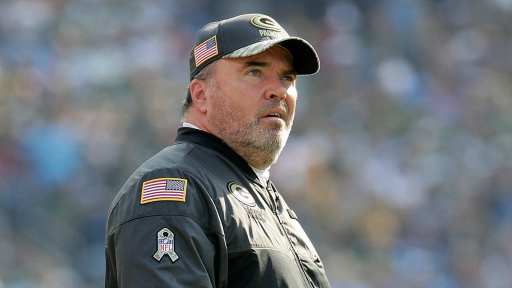 I hate to say it,but the Packers’ head coach,Mike McCarthy,might be on the hot seat.

The Packers are in danger of missing the postseason for the first time since 2008 and have a 4-5 record coming off of their latest loss to the Tennessee Titans by a score of 47-25 on Sunday.

“We’re focused on winning the game,” he said when asked if his job was on the line following the game. “We’re all signed on for our commitment to one another and that’s as far as it goes with us.”

The Packers have had injury issues with tailback Eddie Lacy on injured reserve and Clay Matthews out for Sunday’s game as well as Randall Cobb not being 100-percent. Their next hope to try and save their season is next Sunday night against Washington.

I hope McCarthy doesn’t lose his job and I hope the Packers don’t miss the postseason,but it may happen because maybe,just maybe of they miss their first playoff berth in eight years,it may mean that they need a new voice in the locker room. After all,it has been six years since they won Super Bowl XLV and their window of opportunity is only so big.

If any Patriots fans are reading this, I don’t know about you,but I’m kinda tired of Bill Belichick, the general manager. Bill

Belichick, the coach is amazing,but the other Belichick drives me crazy. How the fuck do you get rid of Chandler Jones for Jonathan Cooper and then just give Cooper his walking papers? Not only that,but trading Jamie Collins over a contract dispute for a mid-3rd rounder next year.

The reason I bring this up is because I’m pretty sure that if those trades don’t occur and those two guys were in the lineup Sunday against Seattle that they wouldn’t have received their second loss this season,all of which have been at home.

Am I blaming the loss entirely on that? Of course not! The men on that field Sunday didn’t get it done and have their own fair share of blame as well,but it boggles my mind that the defense didn’t play up to their potential in that game and the two notable players who aren’t there anymore could’ve helped them out tremendously.

I think Belichick,the general manager is really screwing Bill Belichick,the coach out of some really important wins in some must-win games against opponents who they just might see in the postseason and possibly the Super Bowl. If that happens again,he may have to fire himself as general manager.

ESPN’s Marc Stein is absolutely wrong when it comes to what he hears regarding trade rumours and his report of the Kings wanting to get rid of second year big man Willie Cauley-Stein.

I’d like to know where that rumour came from. Is it because he feels the team has a ton of big men and may be looking to unload a guy or two (which,there is a logjam there,make no mistake about it), or is it to start something that just isn’t true by a reporter from a major network that doesn’t know dick about teams in small markets that cancels 30 for 30 documentaries about Sacramento? I’m taking the latter on that one, especially since local insiders like James Ham of CSN California and Jason Jones of The Sacramento Bee debunked any sort of shopping around of Cauley-Stein.

From Ham: “CSN California has learned that the Kings intend to hold onto the 23-year-old big. They regard him as one of their best defenders and they like his efficiency and energy off the bench.”

From Jones via Twitter: “The bosses allowing me a football Sunday. But yeah, Kings aren’t looking to trade anyone right now, especially players on rookie deals,” he continues, “Kings are happy with WCS approach of late, remember he’s yet to play 82 NBA games yet. They think he can still improve a lot.”

Memo to Stein,don’t report on what you don’t really know unless you’re willing to take time to visit Sacramento and really talk to people and know exactly what you’re talking about.

That’s it for Odds & Ends this week,we’ll catch you next time!