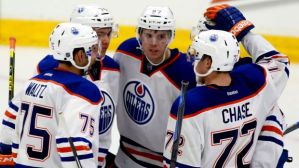 We actually begin with a little hockey and fans who think top overall pick Connor McDavid should begin the year in juniors instead of the Oilers opening day roster are incredibly insane. Some fans are saying that the 18-year-old phenom needs a few years in the minors or even going back to juniors would benefit him,and that’s a comical statement at best.

McDavid is absolutely ready for the pros. He wouldn’t have been the first overall pick had he not been. This is a kid who I think will shine in Edmonton. This is a team that needs to get it’s shit together and even to a point make amends with the fans who have felt that the team has cared very little about winning and being competitive. The Oilers finally has competent people working in the front office, a top tier coach who knows who to win,and young talent that I think now,more than ever,will be eager to win and with McDavid rocking the orange and blue will do so. Having fans,and McDavid himself,wait for his debut is not the way to go.

The Oakland A’s haven’t done much right this season, but they did make one right call by bringing back Barry 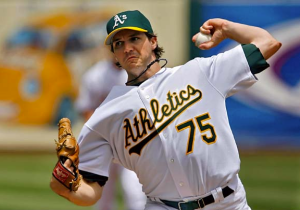 Zito for one last hurrah.

Two weeks ago Odds & Ends reported that Zito would not be called up by the team or GM Billy Beane and I thought it was a mad move to not do that,but I’m glad the team changed their mind.

In his outing against Houston on Sunday,Zito did give up two runs on two hits and a walk in Oakland’s 5-1 loss against the Astros.

“Just being in spring training with them was awesome,” Zito said. “Obviously being able to be with the team during the regular season is huge. It’s a bonus for sure. I didn’t expect it. That’s an understatement.”

Even his manager knows how big a deal it is to the team and to A’s fans as well.

“He had a good year in Triple-A,” manager Bob Melvin said. “Recently we’ve had some issues where we’ve used a lot of guys in the bullpen. He’s here for a reason. It’s not just because he’s Barry Zito. He’s pitched well for us this year and deserves to be here.”

While Zito did make a relief appearance on Sunday,he does hope for a start before season’s end.

“That would be incredible,” Zito said. “I’m sure the fans will be getting rowdy and stuff like that, so just got to stay in my game, not try to do too much.”

I think in a season where there hasn’t been a hell of a lot to cheer about,the move to bring up Zito is a welcome one. This will bring fans who haven’t shown up to see many games this year a reason to come back to the yard, he absolutely deserves a proper send-off and kudos to the A’s brass for allowing it to happen. 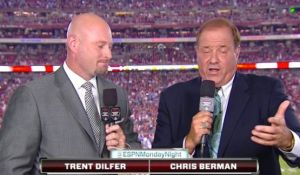 I know this is old news by now,but since we generally publish on Monday mornings, we have to talk about it and I pose this question: Is there a worse broadcaster than Joe Buck?

I think I might’ve found that person last Monday as Chris Berman called the second Monday Night Football game with the Minnesota Vikings visiting the San Francisco 49ers. He,along with Trent Dilfer,had to have been the worst broadcast team I’ve ever heard.

Berman kept reffering to Levi’s Stadium as “The Big Bellbottom”, a nickname that nobody other than him will ever use (and if you do use it,you’re probably a scumbag!) and using outdated references most of the people who were watching the game at that late hour were probably lost on.

Dilfer wasn’t much better, comparing Colin Kaepernick to a Ferrari and saying that many teams would “die” to have the 49ers current roster. Dilfer sounded like a homer for the 49ers. I know he played for them at one point,but damn,Trent! Also,he kept shouting, maybe it was because of his broadcast partner, but the shouting was too much.

Midway through the fourth quarter I muted the television because I couldn’t take hearing these two anymore. I can’t believe ESPN can’t get two better people in the booth for the second Monday night game. You could have one of your college play-by-play guys come over for a game,like Chris Fowler and maybe have an analyst like Steve Young be in the booth. Young is a seriously intelligent person and analyst and maybe hearing those two would’ve been a respite from the disaster that was the Berman-Dilfer team, or Berfer, if you will.
I like these two guys when they’re in the studio and from what I’ve heard they are nice people,especially Dilfer,but when they are in the booth,it sounds like they don’t belong there and on Monday night,it showed.

Dion Lewis is making a name for himself on a championship roster. The Patriots tailback has had quite a 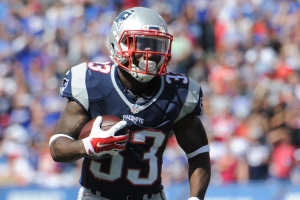 journey to where he is now, he was with the Eagles to start his career,then bounced around to Cleveland where he had a leg injury. He then went to the Colts where he spent a total of one week on their active roster and was released. Now Lewis, 24, has a chance to be New England’s feature back.

Sunday against Buffalo he made sure people around the country knew who he was. He carried the ball seven times for 40 yards and a touchdown, but also caught six receptions for 98 yards. He did,however,have a fumble (just like he did the week before) and his ball control skills need some improvement,but the Pats,just like they always do,have found a gem in Lewis.

I wish I had started him in fantasy this week,I’m a fool for not doing so,and honestly I deserved to lose. He had 17 points in my ESPN league and if you need a running back,pick this dude up! 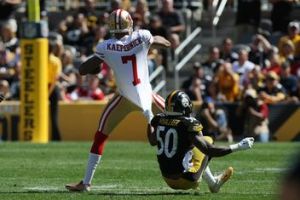 Further proof that one game does not tell the tale of your season is the 49ers’ gut-wrenching loss to the Pittsburgh Steelers on Sunday.

Ben Roethlisberger and company took care of business on offense. Roethlisberger had 369 yards and three touchdowns and tailback DeAngelo Williams scored three times on his own. Colin Kaepernick did have 335 passing yards, but was sacked five times and by the time he was comfortable moving the ball,the game was already decided. Carlos Hyde was ineffective with only 43 yards on 13 carries,a different sight from six days ago when he ran all over the Vikings. Pittsburgh won 43-18.

I’m not surprised to see the Steelers win this game. I did expect the 49ers to be a little better than this, but they weren’t playing the Minnesota Vikings again. They went up against a Steelers squad who got their teeth kicked in up in Foxboro and had 10 days to rest and to get ready to take their frustrations of losing on opening night out on their next opponent. That’s exactly what happened on Sunday and now the 49ers must regroup and get ready to go to Glendale,Ariz. and face a Cardinals team who has yet to lose a game and looks better defensively. 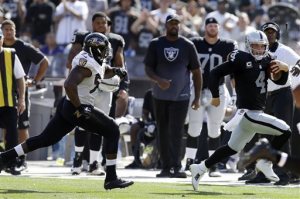 against the Baltimore Ravens 37-33. David Carr came back from being injured last week against Cincinnati and had a career day throwing for 351 yards and three touchdowns, including the game winner to Seth Roberts with 26 seconds to go in the game. Rookie receiver Amari Cooper had seven catches for 109 yards and Michael Crabtree had nine for 111,finally giving the Raiders,and Carr,two targets to throw to. Oakland gained 448 yards,twice the number of yards the Ravens allowed against the Denver Broncos last week.

While the Raiders won big on Sunday,it doesn’t tell the entire tale of how their season will go. This is a franchise that hasn’t made the postseason in 13 seasons and has a lot to prove to the football world,and their fanbase that things are improving for the better. I personally believe that they are. I think they have themselves a fine quarterback in Carr, a tailback in Latavius Murray who is beginning to develop into a good feature back and guys like Cooper and Crabtree who Carr can throw to and make big plays. Things are definitely looking up with the Raiders, we just don’t know if they’re staying in Oakland or not. 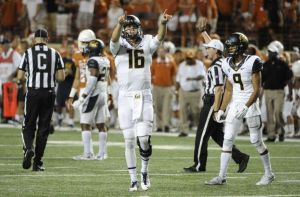 The University of California Golden Bears football team is 3-0 for the first time since 2011,but getting that third win was far from easy.

The Bears’ Jared Goff and the Longhorns’ Jerred Heard both played outstanding football. Goff became Cal’s all-time leader in passing yardage during the game,ending his night with 268 yards and three touchdowns. Heard was magnificent in his second career start. The redshirt freshman had 364 yards passing,but also poured on 163 rushing yards and three rushing touchdowns.

The Bears had a 45-24 lead after three quarters before the Longhorns came roaring back. With less than two minutes to go, Heard scored his third touchdown on a 45-yard draw play to make it 45-44. But Texas kicker Nick Rose missed the extra point which allowed Cal to escape with a one point victory.

While California is still undefeated, the defense still needs some work if they want to continue their winning ways. Yes, this was a better team in Texas that they played and it wasn’t Grambling State or San Diego State, but they now have to go to Washington to start playing their Pac-12 foes and those are the game you really want to win. I think this team has something very good brewing,but last night,it almost fizzled.