It has not been a good offseason for the San Francisco 49ers. With several free agents on defense leaving for other teams to Chris Culliver’s leagl troubles to now Aldon Smith’s alleged false bomb threat at LAX on Sunday.

Smith was going through screening when “when he made a comment indicating that he was in possession of a bomb” and “belligerent and uncooperative with the TSA agent,” according to the LAPD. Making a false bomb threat is punishable for up to a year in jail, a violation of California Penal Code 148.1(a)

This is just the latest in a pattern of off-the-field behavior for Smith, who entered a substance-abuse treatment facility after suspicion of DUI following a single car accident in San Jose last September. Smith missed five games of the 2013 season. Smith also faces three felony changes of illegal assault rifles,discovered at a June 2012 party at his San Jose home where he was stabbed and two partygoers were wounded by gunshots.

If I was Trent Baalke of the 49ers, I would cut him today. Not only would it relieve the team of such a burden,but maybe it might serve as a wake-up call to Smith that the path he is headed down is a bad one. He is no doubt a great player, but he already got his secnd chance from the team and he has messed up big time. It’s time to cut ties with him before he becomes the team cancer.

Can someone tell Brandon Spikes to shut the fuck up? 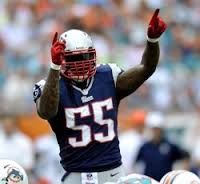 The former Patriots linebacker who signed with the Bills has been going on Twitter blasting his old team. Spikes is upset over the way his time in New England ended and has been whining about it ever since he left,even saying his time could be summed up as “four years a slave”. Spikes is also guaranteeing that the Bills will beat the Patriots twice next year. The Bills have not been to the postseason since the 21st Century began.

Listen,Spikes, you were not a slave. You got to be on a top NFL team for four seasons. Sure,they have different ways fof doing things, but they do one thing in New England that Buffalo doesn’t, they win. A lot!

Look, I get that he is upset about being put on injured reserve at the end of his time there for missing a team meeting. I thought that was pretty ridiculous to do that, but Spikes messed up. If you mess up big time, you’re going to be in Bill Belichick’s doghouse for a while. It is just how that goes in Foxboro.

I hope Spikes enjoys his time in Buffalo, the losing culture, not winning any championships or going to any playoff games because they just don’t do that there.

This weekend marks the retirement of a few hockey greats. Although these two will be playing playoff hockey, it is going to be hard to not see Teemu Selanne of the Anaheim Ducks and Jean-Sebastien Giguere of the Colorado Avalanche on the ice. Selanne, 43, played 21 seasons in the NHL and was regarded as a genuinely good guy and was one of the early superstars for the Anaheim Ducks when that franchise was getting its start in the league.

Giguere, 36, has been a great goalie in the league for teams like Anaheim,Toronto,and Colorado. He has won a Stanley Cup and was a Conn Smythe winner despite losing the Stanley Cup in 2003 to New Jersey. 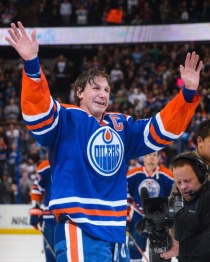 Also retiring is Edmonton’s Ryan Smyth. Smyth,38, was an Oiler twice with stints with the Islanders, Avalanche,and Kings. He returned to Edmonton four years after leaving via trade for New York due to a contract dispute. He was famous for his tearful reaction of leaving Oil Country. He didn’t want to leave,but had to and that may have been part of why the Oilers have not reached the postseason since their 2006 Stanley Cup run.

Smyth got to wear the C on his sweater on Saturday as he tearfully said goodbye to the Oilers faithful at Rexall Place Saturday. I wish Captain Canada well as he ventures into retirement.

We also might be saying goodbye to the greatest goalie of all time,Martin Brodeur of the Devils. Stay tuned!

Also, we still need entry ideas for our 500th entry. If you have an idea that comes to mind,let me know in the comment section below. You have until Entry 495!

Hello Fam, Another wild week of games being postponed and being drawn out until Tuesday,but I still did well on picks for Week 5 with a 9-5 record, with a […]
T.J.’s Pigskin Picks-Week 6 2020

One of the oddities of this 2020 NFL season is surely the fact that the Washington NFL team doesn’t have a name,and no,this current temporary name doesn’t count as […]
Renaming the Washington Football Team

Hello Fam, Well, Week 4 went pretty well picks wise for me, another double digit week with 11 picks correct and only four wrong,so I will take it. Week 5 […]
T.J.’s Pigskin Picks-Week 5 2020

Hello all, The season keeps on rolling and the picks keep coming. Last week I did pretty good and was able to go 10-5 on picks (Eagles-Bengals ended in a […]
T.J.’s Pigskin Picks-Week 4 2020