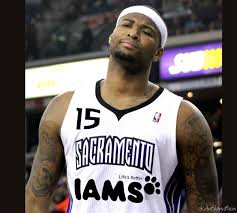 The new commissioner has said that corporate logos may appear on the league’s uniforms within the next five years. The idea,according to Darren Rovell,is to have a 2 1/2-inch by 2 1/2-inch patch on each jersey. Silver says the placement of ads on jerseys would be “inevitable”.

I personally hate the idea of ads on NBA uniforms. Why? Because that kind of thing reeks of a broke league if you ask me. You see this kind of thing in leagues like the Arena Football League or minor league hockey, not real pro leagues like the NBA. It’s bad enough they put horrendous looking sleeves on their fucking jerseys and now they want to put ads on them? Give me a break!

I understand it means more ad revenue for the league, but in my view the uniform should be left alone. I hope that Silver and the NBA reconsider, but it doesn’t look like they will.

Can we all agree that the series between the Dodgers and Diamondbacks in Australia is not the real Opening Day for Major League Baseball? 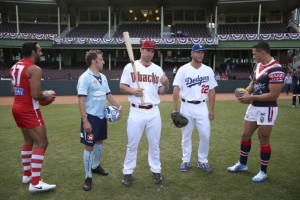 First of all, it’s a measly two game series over there. Second of all it takes place a week and a half before the other 28 teams start playing for reals and finally the games aren’t taking place in America.

I think it’s great that MLB wants to expand their game to other areas that don’t necessarily play it like Australia, but I hardly think a two-game series to open the season ten days before anyone else is (and by the way,they’re still playing exhibition games while all this is happening) is the best way to go. The only way this series would’ve even been any good is if these two teams got into a big brawl like they did in the middle of last season,especially since the Dodgers disrespected the Diamondbacks by celebrating the best division title money could buy in their right field swimming pool.

I’m okay with this being apart of an exhibition series,but not when it counts the most. Let’s bring that tradition back to America.

The Philadelphia 76ers have lost 24 straight games and could extend that streak of 25 games tonight in San Antonio. The 76ers could break the record,which is 26 set by the 2010-11 Cleveland Cavaliers later this week. This is the franchise’s longest losing streak in history,not even the 1972-73 team that won only nine games lost this many in a row.

This team looks bad,and I mean really bad. It isn’t too surprising to me that they have lost this many games in a row. They traded Jrue Holliday in the offseason for the draft rights to Nerlens Noel,who has yet to play. They then trade Evan Turner for an uninterested Danny Granger. This hasn’t looked good for this team and it makes you wonder if they’ll even win again this season. They’ll definitely get help via a lottery pick for next year and beyond,but right now,their situation is sad.