Cauley-Stein continues to leave more to be desired

I’ll be honest,I wanted to give Willie Cauley-Stein a chance to prove that he is worth the long-term,big money contract he’s hoping for in the offseason. But 50 games into the season,I’m still waiting for him to show me and I think I’m done waiting. 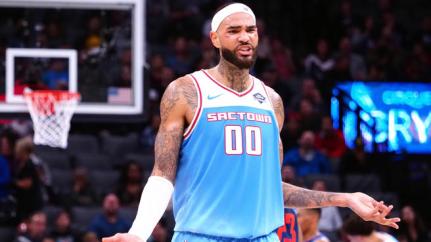 While he does have career highs in points per game,rebounds,and assists per game this season, his blocks per game are down as well as his field goal percentage. Not to mention he has expressed fear of getting hurt around the rim in the past and opponents seem to know it.

Case in point,the game Sunday at the Los Angeles Clippers. While yes,he had 12 rebounds,he was outplayed and overshadowed by forward Montrezl Herrell who looked more aggressive,played harder and meaner than Cauley-Stein shows on a regular basis.

It’s clear to me that Cauley-Stein,25,isn’t the player the Kings drafted in 2015. He was supposed to be a presence in the middle to protect the rim and be a guy like an Andre Drummond who can clean up in the paint. Instead,he only gives half the effort and shows up when he feels he wants to. There are times when he drops into the paint late and doesn’t put his hands up to contest a shot. That’s what we thought we were getting when he was drafted and he isn’t that player. Not only that,but he isn’t worth giving a $100 million contract extension to in the offseason. Why any team would do that when he hasn’t given the effort to be rewarded for it is beyond me.

I think the Kings need to move on from Cauley-Stein. While he’s growing as a player,in my eyes he isn’t what this team needs. What they need is a guy who isn’t afraid to box out,protect the rim,stay on his defensive assignments and block a shot. Most of all,that player needs to be able to give a maximum effort every night.

So,who should the Kings get? It’s hard to say. I’d love to have Drummond,but he’s locked up long-term. Somebody like him would be viable,though. I don’t think that player would or should be acquired via the draft as this team is on the rise and doesn’t have time to develop one. I will say that having more than 0.6 blocks per game is a high priority.

Yes,this team may need to get a small forward at some point,but if you ask me,I think they would benefit a lot more with a bigger presence in the middle. If they can do that,they’ll win a lot more of these games that they’ve lost this year.