We begin Odds & Ends this week with the Phoenix Suns having issues getting a deal done to renovate their current home of 27 seasons,the Talking Stick Resort Arena.

The Phoenix City Council voted to postpone a vote to commit $230 million to cover costs of renovation for a month. Earlier in the week the Arizona Republic reported that Suns owner Robert Sarver recently called a council member and said he would take the team to Seattle or Las Vegas if the arena deal doesn’t go through.

By Friday,Sarver looked to rebut that message.

“The Phoenix Suns are not leaving Phoenix,” Sarver said. “I am 100-percent committed and have been for the last four years to find a solution to keep them in downtown Phoenix where they belong.”

In a statement Friday, Suns president Jason Rowley noted that the team has not “engaged in any discussions with Seattle, Las Vegas or any other city for that matter” on a potential relocation.

The Suns have been in Phoenix since their founding in 1968 and were Arizona’s first professional sports franchise. They have not made the postseason since 2010.

I honestly hope the Suns don’t leave. I also hope it doesn’t come to the public having their taxes raised in order to support a franchise that hasn’t exactly had a commitment to winning anytime soon. I’m pretty sure Sarver could probably have this financed privately one way or another and that it shouldn’t come to a public vote,especially when taxpayers don’t seem to be happy with the idea of it in order to fund an arena renovation. But hey,at least they’re not talking about a brand new arena,at least not yet. Let’s not give them any ideas.

Moving to football and the Oakland Raiders continued search for a place to stay the 2019 season may end at China Basin in San Francisco. 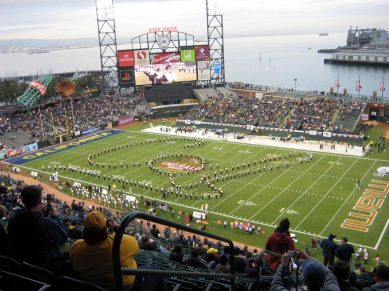 AT&T Park when it hosted football for the University of Calfornia Golden Bears in 2011.

Yes,that’s right,AT&T Park may be the temporary home of the Raiders as the team vowed not to play in Oakland if the city decided to sue them,which last week,they did.
Jason La Canfora of CBS Sports reported that the home of the San Francisco Giants may be their next home,citing sources.

There are some NFL execs who believe the easiest solution, ultimately, would involve the Raiders sharing Levi’s Stadium with the 49ers for a season. AT&T Park, where the San Francisco Giants play, is another potential option, sources said. The NFL is not pleased by any means with the current state of affairs with the Raiders, and will be under pressure to get this sorted out as quickly as possible.

AT&T Park is no stranger to playing host to football. They did host the California Golden Bears in 2011 while Memorial Stadium in Berkeley underwent renovations and hosted the UFL’s California Redwoods and the XFL’s San Francisco Demons and hosted a bowl game there from 2002-13.

La Canfora reported Raiders owner Mark Davis “will face considerable backlash” from the NFL if he hasn’t settled on a venue by Super Bowl LIII. Logistics such as scheduling, ticketing and marketing dictate that as a timeline. La Canfora also reported that the league prefers the team stay in the Bay Area next year and with that said,Davis also has preferred choices such as AT&T Park and Levi’s Stadium. The aforemenioned Memorial Stadium and even San Diego have been discussed as temporary homes.

I personally don’t like the idea of AT&T Park as a place for football for eight home dates. It’s going to rip up the field and make a mess of it and beyond that,it irritates Giants fans when football is played there. However,I don’t think it’s out of the realm of possibility for the Raiders to go there. They’ve hosted football there before and haven’t been shy about doing so and eight home dates for the Raiders will bring in more revenue for the stadium and I have a hard time believing they’ll say no to that. I do think,however,they should.

After beating the Denver Broncos on Saturday 17-16,the Browns find themselves mathematically alive in the playoff race. Now,a lot has to happen in order for Cleveland to notch their first playoff berth since 2002.

In order for a Wild Card bid: 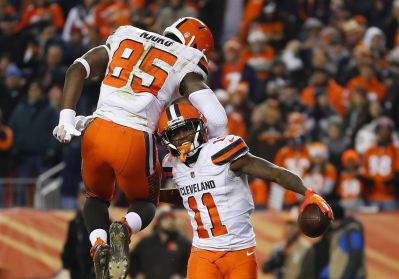 David Njoku (85), celebrates with Antonio Callaway as the latter scores a touchdown for Cleveland.

Now,do I think the Browns will make it? Probably not. I probably have a better chance of winning a large sum of money at Thunder Valley Casino this week. Also,a tie between the Titans and Colts is unlikely given that it’s rare for ties to happen in the NFL even though four teams have one this year.

However,how many of us thought we would be talking about the Browns winning more than three games this year let alone their playoff hopes in December? Probably next to none of us. But I love that we are. They have great young pieces in Baker Mayfield who has shown he can be electrifying on the field as well as Nick Chubb who has run for great bursts here and there this year and in my view will be talked about in the likes of Todd Gurley,Ezekiel Elliott and Le’ Veon Bell. They also have a great veteran receiver in Jarvis Landry and a young tight end in David Njoku who is proving to be a reliable target for Mayfield. I think even Antonio Callaway might be something for this team.

While their playoff chances are slim,I like them going forward into 2019. This is no longer a team that is being considered as an NFL graveyard. They’re on the brink of being very good for seasons to come.

Finally this week,I haven’t talked about my Edmonton Oilers much since the season began,but I think I will.

Since firing Todd McLellan and replacing him with Ken Hitchcock,the team has gone 9-3-2 and are fighting alongside the rest of the Pacific division for not just a playoff berth,but the division lead.

Sure,the Oilers lost 4-2 on the road in Vancouver last night,but that doesn’t discount the turnaround Hitchcock has been able to do for a team with one of the league’s hottest players that started out ice cold.

His players are buying into his philosophy and it’s paid off. I think one of the things that’s helped is his public praise of his players is helping them on the ice,even when that praise may or may not be deserved.

He called his captain and star player Connor McDavid “fearless and reckless”. But is it a good thing?

“Coming from a coach — I hope so,” said McDavid, who had 48 points in his first 32 games, including five game-winning goals. “I hope he’s not trying to chirp me to the media. The fearless part is good, The reckless part isn’t always good, but I can find a way to clean it up.”

He added, “It’s been really good with Hitch and good for everyone and not just me. He’s got guys to really elevate their games.”

Hitchcock,66,has also gotten players to buy into a lesser role,such as Milan Lucic,who in the past might balk at the idea of being on the third line as he is now,but has instead embraced it.

“It’s nice to have that communication with him,” Lucic said of Hitchcock. “It’s not always positive and it’s not always negative either. It’s having that black and white and what he expects from you.”

I was a little skeptical of Hitchcock coming aboard,but them I remembered that he’s one of the best coaches of all time and that if anyone can bring a breath of fresh air into a dressing room that needed one the most,it’s him,and it’s paying off. Whether or not it pays off in a playoff berth and/or a deep run in the postseason remains to be seen. I wouldn’t bet against it at this point.

That’s it this week for Odds & Ends,we’ll catch you next time!