We begin this week’s Odds & Ends with something I’ve been wanting to talk about for a week or so,but since we took a week off from the feature, I’m talking about it now.
On a recent survey sent to fans, the San Francisco 49ers asked this question:

“How important is winning to your stadium experience?”

At 0-9, the 49ers are on their way to their worst season in their 71-year history. Fans are disappointed. The stadium is emptier by the week and to have a question asked that was insulting and also one that shouldn’t have been asked at all.

Why would winning not be important to fans? Don’t you play to win the games? I guess not if you’re York and the 49ers.

If you’ve seen the empty red seats in that billion-dollar stadium with no shade on television,you can clearly see why fans want no part of going to a game just to watch them lose. They want to see them win. I get that this is a rebuild, but you have to give fans a reason to believe that things are on the right track and that the best is yet to come. York and the 49ers have yet to do that and the question that got asked is a clear example of that. I think 49ers fans deserve better.

Jimmy Garappolo is now a member of the 49ers after being traded there from New England for a second-round draft pick in next spring’s draft.

Garappolo has only started two games in his NFL career and showed flashes of excellence in such a short sample size. Honestly,I’m kind of wondering why.
Garappolo didn’t play in the 49ers’ 20-10 loss to the Arizona Cardinals. Many are wondering when,or if, fan will even see him on the field the rest of this season or if they’re willing to sign him long term or will use him as trade bait to lure a team who might also have quarterback needs to give back a second-rounder for San Francisco.

Honestly,if it was me,I’d give him a tryout. Maybe not now, but in the final few games of the season just to kick the tires and to see if he’s worth a contract extension or fits into any of their plans going forward. Otherwise, why would you trade such a high draft pick to the best team in the league for him? It just doesn’t make any sense to me,but then again, a lot of things this franchise is and has been doing for a few years haven’t made much sense, but that’s a long tale to tell for another time.

Jacksonville’s Leonard Fournette was deactivated for Sunday’s 23-7 win against CIncinnati due to a violation of team rules.

That violation? Missing the team photo.

The team photo was to be taken during the Jaguars’ bye week and since Fournette was a no-show,he received punishment for his actions.

The announcement was made prior to the Jaguars hosting the Bengals on Sunday. Chris Ivory started in Fournette’s place and played well. Fournette was also missing the game prior due to an ankle injury. He is sixth in the league in rushing and has been an intrical part of the Jaguars’ rushing attack and a reason why they’ve had a surprise season so far.
Head coach Doug Marrone says he will be back next week when the Jaguars host the Chargers.

It may seem like a small thing to bench a player for,but Fournette needs to know that he’s responsible for his actions,on and off the field. He’s been a big part of what the Jaguars have been this year,and while Ivory and T.J. Yeldon were able to carry the load without him, they’re going to need him as the season goes along and the playoffs become a reality for the Jaguars, something that hasn’t happened there since 2007.

Finally this week,we had a week where a lot of fighting was happening in the NFL.

In the aforementioned Jaguars-Bengals game, Cincinnati receiver A.J. Green was shoved to the ground by Jacksonville cornerback Jalen Ramsey. Green took offense and wrestled Ramsey to the ground and began punching him. Both players were ejected.

In New Orleans, Tampa Bay quarterback Jameis Winston, sidelined with an injury, provokes Saints cornerback Marshon Lattimore by poking the back of his helmet. Tampa Bay receiver Mike Evans then blindsides Lattimore on the sidelines and a melee ensued.

No ejections were given,but the Buccaneers were flagged 15 yards for unsportsmanlike conduct on Evans.

Finally in San Francisco in the final minutes of that game, a late hit by Antoine Bethea of Arizona on San Francisco quarterback C.J. Beathard led to a skirmish. 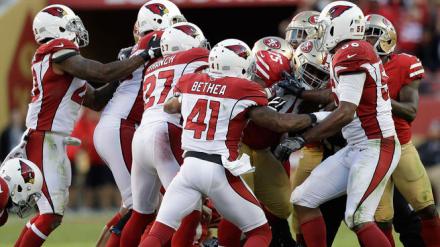 Usually you see this out of maybe one game during any given week. But three? It’s pretty bizarre. Football isn’t known for this kinda thing. Sure, players will get into it and get flagged,but not to the point where you’re seeing two of the three games where players are getting thrown out for fighting. It makes you wonder if you’re going to see more of this or if it’s just a one-week anomaly.

That’s going to do it for Odds & Ends today,have a great week,everybody!