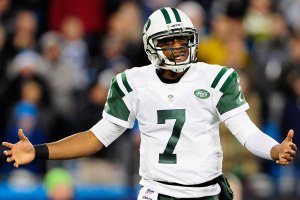 Geno Smith must not have a lot of support in the New York Jets locker room if few people have stood up for him since he was sucker punched by former teammate IK Enemkpali last week over an unpaid debt. Smith suffered a broken jaw and will miss a good portion of this season in a year where he was hoping to prove he was the starter for this team.

He does have some support in his wideouts Eric Decker and Brandon Marshall.

“We’ve all got Geno’s back. We all care for him, and hope for a speedy recovery,” said Decker.

A lot of others don’t have his back.

“It’s a lack of leadership on Geno Smith’s part that he would put himself in harms way to get sucker punched,” said Hall of Fame wide receiver Cris Carter.

“It became about the fact that Geno wasn’t necessarily apologetic, and being in a way remorseful about the money, when saying he was going to pay IK back. You know, he didn’t, and he was rather smug about it,” said former NFL safety Ryan Clark.

I feel bad for Smith to an extent. Noobody deserves to be sucker punched in the jaw and to miss the season like that. In my view, Enemkpali should have been suspended for a few games. That’s assault! It also amazes me that Enemkpali was able to find another team so fast,but hey,Rex Ryan is a wild and crazy guy.

So after 18 long years at their current home,FedEx Field, the Washington Redskins are wanting to move into a new stadium.

Redskins president Bruce Allen says he won’t bow down to political barriers in regards to changing the team’s name in order to move back to Washington D.C., the team has played in Landover,Md. since 1997. A group called Change the Mascot released a statement regarding the team.

“The team and its leaders are so obsessed with clinging to a dictionary-defined racial slur that they are willing to abandon their hometown and local fans in order to continue degrading Native Americans,” said Joel Barkin, spokesman for the grassroots campaign. “Now that Bruce Allen has been relieved of day-to-day responsibilities as general manager he must have a lot of free time on his hands to double down on this racist moniker and try to figure out what to do about Native Americans returning donations from the team. Unfortunately, Bruce Allen, team owner Dan Snyder and the Washington team fail to understand that you cannot buy acceptance of continued racism.”

My issue isn’t with the team standing pat on keeping its name,it’s wanting a new home after only 18 years. I don’t understand what is wrong with the current stadium. If the team feels their current facility is outdated,then spend some money on renovations instead of creating a whole new stadium that costs billions upon billions of dollars to build nowadays. It’s bad enough the Atlanta Braves are leaving Turner Field after 20 years in 2017, now this? How old does a stadium have to be before a team wants a new place to play? 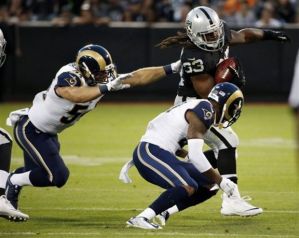 It may be safe to say that Trent Richardson may not have what it takes to be a serviceable NFL running back.

Case in point, in Oakland’s 18-3 preseason win against the St. Louis Rams, Richardson bypassed an open hole where he could have easily scored,but he instead chose to follow the other side for a two yard gain. This isn’t the first time Richardson has been criticized for missing an open hole and it continues the idea that Richardson is not capable of finding the big play.

Richardson has yet to live up to the hype of being the third overall pick in the 2012 draft. His poor performances in Cleveland and Indianapolis have him now fighting for a job as a back-up running back on the Oakland Raiders. Maybe Jim Brown was right about Richardson when the Browns drafted him,maybe he doesn’t have the right vision to be a quality NFL back. Richardson,however,has one last chance to prove it.