Okay,so it’s time to talk about the planned arena sculpture.

We’ve heard all the outrage from fans and citizens alike. It’s ugly. It has nothing to do with Sacramento. It costs too much. Why can’t someone from Sacramento create something instead?

All valid points, but honestly,other than the high price tag, I don’t think this sculpture is all that bad. First off, it’s a Disney-inspired piece,and since I’m a fan of Disney and am headed to the Magic Kingdom next month, I’m not complaining.

Also,I don’t live in Sacramento proper,so the price tag does not affect me in any way whatsoever. But since everyone else cares, it’s a big deal and a valid talking point about it. I honestly think if this sculpture didn’t have the $9.5 million price tag that people would be more accepting of it. Maybe not as accepting, but more accepting as they are now. I think that this is a bit of an overreaction to something close to nothing and that once the arena opens next year,people will grow to like it.

Continuing with the Kings, ESPN will be featuring them in an upcoming 30 for 30 documentary in April.

The film titled “Down in the Valley” follows Sacramento mayor Kevin Johnson as he battles executives and owners to keep the Sacramento Kings where they are and avoid a move to Seattle. The Kings were saved from relocation in 2013 and new ownership in Vivek Ranadive came afterwards.

I’m glad ESPN has chosen to highlight the saga of the team’s last few years of uncertainty because it really highlights the fact that small markets really do care about their teams as much as fans in biggers markets do,maybe even more. Because relocation can happen to any team at any time. Ask fans in Seattle about that, they know.

Further proof that the odd-numbered years haven’t been fair to the Giants in recent years, Hunter Pence is going to miss the first couple of months of the season due to a fractured arm that he suffered by getting hit by a pitch by Cubs pitcher Corey Black. Not only do the Giants lose their star right fielder and a great bat in the heart of the line-up, but also their ironman having played in 383 straight games, the longest active streak among active MLB players.

The Giants will now have to replace Pence’s bat in the line-up in addition to filling the hole left behind by the departure of Pablo Sandoval. These are two very big holes to fill for the Giants and while it’s wonderful that they’ll be hanging up another championship banner at AT&T Park and will receive their rings next month, a lot of us fans wish we could be more excited about this coming season with the injury to Pence and coming up short on acquiring big time free agent talent in the offseason while division rivals like the Padres and Dodgers made major changes and/or improvements. It’s no wonder why the odd-numbered years don’t correlate with the Giants.

It looks like the Patriots’ divisional competition is getting much,much better. 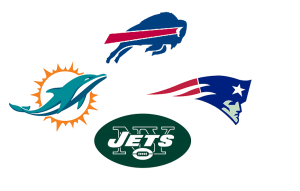 It all started when the Eagles traded star tailback LeSean McCoy to the Bills in exchange for linebacker Kiko Alonso. McCoy then signed a five-year,$40 million deal with Buffalo.

Then the Bears sent star wide receiver Brandon Marshall to the Jets, a team where the careers of wideouts goes to die. However, the Jets do have Percy Harvin and Eric Decker on their roster despite their lack of contribution in 2014.

Just when you thought the AFC East was done, the Dolphins come right out of left field by signing Ndamukong Suh to a six-year,$114 million deal, a deal that gives Suh $60 million in guaranteed money.

While the moves the rest of the AFC East has made are very noteworthy, they still have to get past the Patriots to win this division and you can bet the boys in Foxborough will still five their division foes a run for their money. They just re-signed Devin McCourty to a five-year deal.