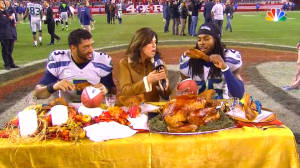 Memo to 49ers fans: Richard Sherman having dinner at midfield following the Seahawks 19-3 win on Thanksgiving is not a sign of disrespect.

What was disrespectful was how bad your team’s offense was on the field that night. Like form instance,in the first half when, on a 3rd and 20, they decide to run the ball.

Who does that? Who has time?

Also not a bright idea is throwing to your fullback in triple coverage. Just sayin…

Colin Kaepernick’s development has not been very good,especially since the 49ers threw $100 million to him in the offseason. I don’t want to say he isn’t a very good player because he is talented,but he isn’t being coached or developed any better the last couple of years to warrant paying him so much.

Sherman had a great game against that anemic offense, helping expose it for what it is at the moment: Very subpar. I know that you hate the guy and think he’s a thug,but he is a pretty good football player,and actually a pretty smart guy if you ask me.

Sherman earned the right to eat that turkey on your team’s logo. If you don’t want that happening,maybe your team should’ve done something about it in the game. Shit happens,deal with it!

In his ongoing quest to prove me right, the Oakland A’s general manager trqaded away their best player on Friday, as they sent All-Star third baseman Josh Donaldson to the Toronto Blue Jays for Brett Lawrie and three players you have never heard of.
It appears Beane isn’t done with the dismantling, he is also open to trading Jeff Samadzija, who the team acquired in July in the hopes of gearing up for a championship run. The A’s lost in their Wild Card game to the Royals 9-8 in 12 innings.

It’s clear that players on the A’s are downright pissed,particularly Josh Reddick.

“This doesn’t make sense to me. We just traded our best player the last two years,” Riddick told the San Francisco Chronicle.

Josh Donaldson was traded from Oakland to Toronto on Fri., Nov. 28

If anyone wonders why the A’s haven’t won a title in 25 years,the answer is Beane. If he actually kept some of these players longer than a season or two,there would probably be more banners hanging in that piece of shit stadium of theirs and three titles in five years across the Bay doesn’t happen.

Professional sports teams have tanked before,but not as deliberate as two teams in two different sports.

The Philadelphia 76ers,or should I say,the 0-76ers, are making good on their promise to not only suck,but suck out loud. They are 0-16 and are three losses away from setting the record for futility to start a season,a mark set by the 2009-10 New Jersey Nets.

They have a chance to continue such a streak tonight against the world champion San Antonio Spurs.
It looks as though the Sixers just might set the mark and set it higher than it’s ever been. I do feel bad for players like Michael Carter-Williams, who I think is giving his best efforts even if the organization he plays for is not aiming so high.

Not to be outdone, the Edmonton Oilers have lost nine in a row, their latest loss was in overtime to the St. Louis Blues 4-3.
The Oilers’ streak of futility has been well documented. It’s been eight seasons now where this team has showed few signs of improving and it may be getting worse,mainly because the inept front office in Edmonton is probably going to stay the course by keeping coach Dallas Eakins, and it might be Taylor Hall’s fault.

Hall is vouching for his coach and placing the blame on the team for not performing as well as they could be and that Eakins has not lost the locker room. While I appreciate Hall’s humility and acceptance of blame,it’s the lack of a winning culture within the organization and lack of real action by the front office that has led the Oilers to where they are now,as I mentioned in my column last week. If they would just get the right people running the show instead of a bunch of guys who were on Stanley Cup winning rosters in the 1980s and a coach who has had NHL coaching experience and is a proven winner, they wouldn’t be in this mess.

The Oilers standing pat leads me to believe that they are tanking even though they have yet to publicly say so like in Philadelphia.
One question I have is why aren’t the NBA and the NHL doing anything about their teams tanking seasons on purpose? I would think a league with a team that says they’re tanking would do anything to prevent them from doing so. If I was a commissioner of a league and one of the clubs was saying this,I would maybe take away a draft pick. It isn’t fair to the players who are giving their all to be doing so for a team that has no aspirations of winning whatsoever. Nobody plays a sport to lose and turning a blind eye to teams that are tanking like in Edmonton and Philadelphia leaves that eye to be a black eye.

Hello Everyone, Now we’ve reached the part of the year where I reveal my predictions list for the new year and 2021 is just days away and I have a […]
T.J. the Sports Geek’s 2021 Predictions
%d bloggers like this: