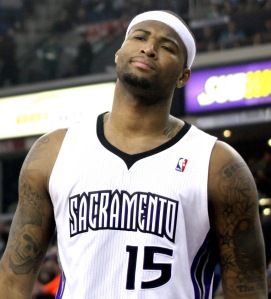 The longer DeMarcus Cousins’ career is, the more we wait for him to mature. The last time I checked, I didn’t know that was supposed to happen.

Cousins,23, is in his fourth year in the NBA, all with the Sacramento Kings. He is unquestionably the face of the team and the most important player on the team despite his hotheadedness. He currently averages 22.3 points per game and 11.2 rebounds per game, both career highs. Before the season started, he signed a four year,$62 million contract extension to stay with the team.

Although he is an excellent player to watch, he no doubt has an on-the-court anger problem. Cousins leads the league in technical fouls with 15, including two last night in the Kings’ humiliating 129-103 loss at home against the Houston Rockets, a loss that some fans have blamed on the front office for eliminating three-point specialist Jimmer Fredette from the equation by buying out his contract.

Cousins was ejected after he received a soft foul call on Dwight Howard,which set him off. While his coach, Mike Malone, was trying to argue for him in a more reasonable way, Cousins decided to get in the official’s face and shout obscenities. He had to be restrained by assistant coaches.

It is unclear if he will be fined or suspended by what he did Tuesday night, but one sure thing is that if he does get his 16th technical foul,he receives an automatic one-game suspension.

What I don’t understand is why this team and this fan base is still waiting for Cousins to mature after his fourth year. I understand he is still considerably young at 23, I know I was. But he is the franchise’s best player and if his team was much better, he would be receiving All-Star considerations and needs to act like he is the team leader. The Crybaby Cousins act is getting old for Kings fans and to be honest, it makes fans question whether extending his contract was a good idea in the long run for the team.

I get it,DeMarcus, the officiating sucks. We all know that. But you can’t cry over every call in this league,it’s what labels you a crybaby and an immature player and it probably kept you from being an All-Star this year. Questioning bad calls is what your coaching staff is for. If you want to question a bad call, you might want to do it in a calmer matter than the way you did on Tuesday night. In fact, I am sure all Kings fans would like for that to happen so that you don’t get as many technical fouls and that you’re around late in games to finish them and hopefully get the win.

I think that DeMarcus Cousins is a great player, but his maturation gets an incomplete grade from me. I hope he gets his act together sometime because it’s getting old.