The A’s are red-hot,but for how long?

Just when many thought the Oakland A’s would be something close to nothing this 2012 MLB season, they are making all doubters (myself included) eat their words.

After having one of their trademark fire sales this offseason where All-Stars Trevor Cahill, Gio Gonzalez,and Andrew Bailey were unloaded to Arizona, Washington, and Boston respectively, the A’s got back some promising players like Josh Reddick and Ryan Cook (who was the lone A’s All-Star this year) that have helped them get to a record of 54-45 and five and a half games back of the first place Texas Rangers in the American League West. The A’s also have Yoenis Cespedes from Cuba who they signed in the offseason. 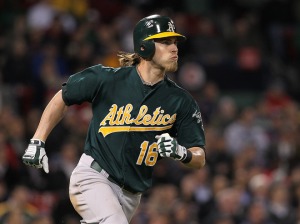 Josh Reddick has had an amazing and surprising season for the Oakland Athletics in 2012.

While they have had an impressive season in terms of looking better than most expected, they are still in third place in their division behind two other very good teams in the Texas Rangers and the Anaheim Angels ( I refuse to call them the Los Angeles Angels of Anaheim, what a stupid name!) who have not only a Rookie of the Year candidate, but also an MVP candidate in 20-year-old Mike Trout. The A’s have also have also had to eke out a lot of one-run wins which means the possibility to keep this going may not be there for long.

I do think something good is brewing in Oakland and if Billy Beane doesn’t tamper with much this team can win in the future. I can’t help but think that somewhere along the line Beane will have another fire sale and guys like Reddick and Cook will be shipped elsewhere. You almost expect him to ship off your top talent if you’re an A’s fan.

While A’s fans have come out of hiding and are wearing their green and gold again, they certainly aren’t wearing it at A’s home games. The team despite its recent success is still in the bottom five in attendance and is only two spots up from last year (from 30th to 28th). Some things never change, I guess.

Will this success continue in Oakland or will Beane find a way to break up the band again? Only time will tell!