And now some vital information for your everyday life 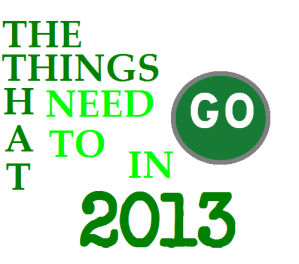 We have more than seven months to go before the start of the new year, but it is never too late to compile what we think “needs to go” in the new year. So we’re asking you the reader to help contribute with me and my editorial board for what needs to go in 2013. The criteria is as follows, anything goes but the editor (that’s me) has the right to refuse it if he disagrees with it or thinks it’s in bad taste. Oh,and no wishing death on people, that’s just wrong and you should probably re-evaluate what’s going with you if you’re doing that. No wishing violence on people,either.

Submissions will be taken until Sept. 29 at which time the list will be broken and the 100 entries we think are best will be on the final list of The Things That Need to Go in 2013. Anything that happens after that date will be considered for The Things That Need to Go in 2014 list (unless of course I find something so absurd, in which case it has to make the current list being compiled!). You can leave a comment below on what you think should go, or shoot me an e-mail at sjchevalier07@yahoo.com. Thanks and enjoy your day!