We begin this Saturday edition of Odds & Ends with some “I told you so” news in that the Los Angeles Chargers’ viability in the area is being discussed among NFL owners and executives.

According to ESPN’s Seth Wickersham, one of the topics in this week’s league meetings is the team’s ability to be financially stable in Los Angeles. Sales of personal seats licenses for the team’s new home in Inglewood,Calif., which will be shared with the Rams, have been a struggle and that the team is revising their revenue goals, from $400 million to $150 million.

Combined with the fact that some games in the team’s temporary home,the StubHub Center in Carson,which seats around 27,000 and is mainly the home to the Los Angeles Galaxy of Major League Soccer, haven’t sold out. In fact,some of those fans in attendance were fans of the visiting team in some cases. It makes one wonder if the move was even worth it considering the team seems to be finding an entirely new fanbase after leaving a loyal one behind that supported them for 56 years just two hours south on Interstate 5.

I think what we’ve learned is that the team belongs in San Diego and shouldn’t have left in the first place. Now,the question remains whether or not the team will be welcomed back after taking the hearts of those fans and ripping them out of their chests en route to Los Angeles. I think they would be on one condition, and that is if the team would get sold to someone else. I know a lot of Chargers fans,past and present, who dislike the Spanos family very much and I think if they were to not have any ties to this team that a reunion would be much sweeter and I agree. You get an ownership group in there who would be committed to not only returning the team to where it belongs,but also a plan to get them a new stadium and I think wounds would heal a lot faster than you would even know.

However, with the mess they’re in now which was made even more laughable when,earlier this month,they trotted LaDainian Tomlinson out to beg San Diegans to continue to support the team who broke their hearts in the first place by leaving and you just may have a case of buyer’s remorse when it comes to the Chargers and Los Angeles. I think the Fight for L.A. needs to come to an end. Throw in the towel! 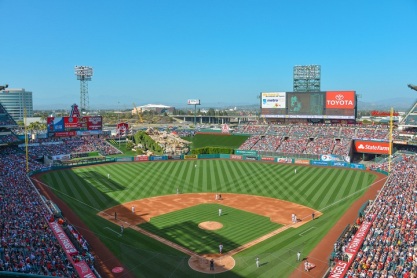 Continuing with Southern California sports and a team in that area that is breaking its lease, that being the Los Angeles Angels.

The team decided to opt out of its lease with the City of Anaheim at the earliest date possible, in the hopes of building a new home near their current one while the team and the city will negotiate on a new deal to keep the Angels in the fourth-oldest ballpark in the major leagues.

“As we look to the future, we need the ability to continue to deliver a high-quality fan experience beyond what the original lease allows,” Angels president John Carpino said in a statement. “It is important that we look at all our options and how we can best serve our fans now and in the future.”

City officials are understanding of the situation and are hopeful they can keep the team in Anaheim, their home of 52 years. The Angels have played in Angel Stadium since moving there from Los Angeles in 1966 as the California Angels and later the Anaheim Angels.

I honestly think the Angels should either build a new stadium adjacent to the current one or build one somewhere close to where they are now. It seems like they’re wanting a new building for the sake of having a new building when Angel Stadium is probably just fine as it is. They have talked about nearby places such as Irvine and Tustin as recently as 2014,but if you’re going to insist on being in a new ballpark,why not have it in Anaheim where you currently are?

Also,why not be the California Angels again? You guys are NOT L.A.’s baseball team. You are Orange County’s team, there’s no shame in it whatsoever. Be that and commit to Anaheim and you’ll be just fine.

Moving on to basketball and the Sacramento Kings. Yes,they’re 0-2. Yes,they’re probably going to have another dismal season as far as the standings go. But I think they’re improving to an extent.

I have watched a bulk of the team’s first two games and while they lost to two teams who are likely to make the playoffs this year in the Utah Jazz and the New Orleans Pelicans,they showed us what’s possible in the future.

Let me say this, I like Marvin Bagley III on this team. I like what he brings to this lineup and I like his energy and the talent he brings to this Sacramento team. What I wish would happen is seeing his coach,Dave Joerger,play him more and more. I also like what I see from Harry Giles. Sure,he’s a little bit raw, but he’s showing me things other rookies in the past haven’t,and that’s a good thing.

I do think that this team has a ways to go before they can show that they can play good defense. You can’t give up 149 points to the Pelicans like they did last night while netting 129 of your own. That point total alone should be more than enough to win. Yes, the officials seemed to blow the whistle whenever a player breathed on Anthony Davis,but good teams find ways overcome bad calls like that. If they can let those go and play on the level of their opponent, I think we might have something here.

We’re only two games into this season,Kings fans. There’s no need to want to fire the coach or the broadcasters of the team or the mascot or the general manager at this point. I get it,it’s been an eternity since this team’s been any good. But hang in there,I think things are going to look up sooner than later.

Finally this week,we’re going back to football and that horrible,unwatchable game that,for some reason,I kept watching on Thursday night between the Denver Broncos and Arizona Cardinals. It was all Denver all night long with the Broncos winning easily 45-10 on the road in Glendale,Ariz.

Things were so bad offensively for the Cardinals that as a result of their poor showing last night,their offensive coordinator Mike McCoy was fired. This is the second straight year that McCoy has been fired midseason as an offensive coordinator of a team. Byron Leftwich has been elevated from quarterbacks coach to replace McCoy.

Under McCoy’s guidance, Arizona’s offense was among the worst in the NFL ,and in 15 categories was the worst. The Cardinals have yet to gain 300 yards in any of its seven games this season and has not had a 100-yard rusher.

Rookie quarterback Josh Rosen had 195 yards passing with one touchdown and three interceptions. David Johnson had 39 yards on 14 carries,averaging 2.8 pards per carry.

The loss brings the Cardinals to 1-6 on the season,the league’s worst record as of press time.

Honestly,this team is the league’s worst right now. Not Oakland, not the N.Y. Giants,not the Colts, this one. With only one really good player on offense in Larry Fitzgerald (who is honestly wasting his final years being on this team,he should be on a contending team right now) and Johnson,who has yet to be his 2016 self when he had 1,200 yards rushing and was looking to be better before injuries ended his 2017 season,as well as a defensive minded coach and you’ve got a team that’s taken the lead in the Nick Bosa sweepstakes.