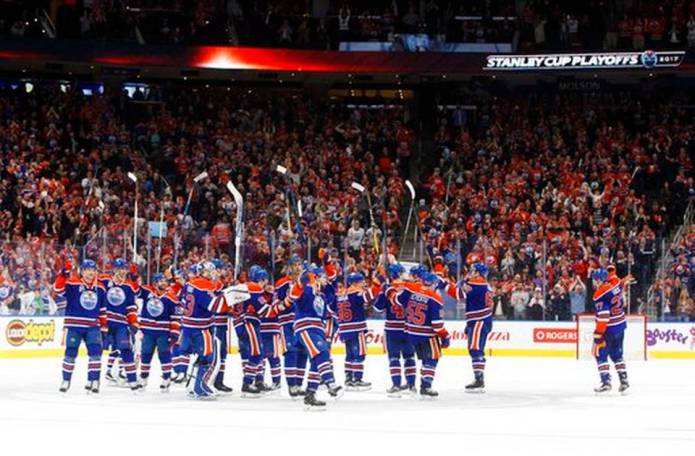 After 11 years of not making it to the playoffs,after bad year after bad year, netting three straight top overall picks,and fans experiencing misery,disappointment,futility,and embarrassment, the Edmonton Oilers are playoff bound. That berth was clinched Tuesday night with a 2-1 win against Los Angeles in front of an excited home crowd at Rogers Place,and they enjoyed every minute of it!

Do you want to know how long it’s been since they made it? Well, back in 2006 when the Oilers last made the postseason I was 24 years old and working at an Albertsons grocery store near the local mall and I got there by riding my bike because I still didn’t have my drivers license. That store closed not long after the Oilers were beaten by the Carolina Hurricanes in the Stanley Cup Finals and the building that housed it and other stores was bulldozed last year. I also weighed 174 pounds (give or take) back then,but that’s another story for another time.

Anyways, a long nightmare for a very loyal and passionate fan base is over as Oilers fans in Edmonton and around the world get to see their squad in the postseason. No more will they have to watch the playoffs without having a vested interest in them,without having to pull for someone else on the side because their squad isn’t there. No more will they have to have NHL Draft Lottery parties to see if they get yet another top overall pick.

Now they’re getting to see this talented team led by 20-year-old Connor McDavid take the ice in the postseason. While I’m excited that McDavid gets to see his first postseason in the NHL,there are two other guys who deserve it more than anyone because it’s also their first NHL postseason; Jordan Eberle and Ryan Nugent-Hopkins. Eberle has been with this team since he was a rookie in 2008 and has experienced probably the lowest of lows with this team in terms of all the losing and all the questionable decisions made by the atrocious front office that was in place before 2015. Nugent-Hopkins was the first overall pick in 2011 and while he was an All-Star in 2015,his productivity has declined the last two seasons, but he, along with Eberle, deserve to see the postseason at least once in their careers in Edmonton,and here they are.

The guys who were acquired to help get Edmonton back such as Milan Lucic and Cam Talbot deserve a lot of credit as well. Talbot has played his ass off all season and next to McDavid is probably this team’s most valuable player. Meanwhile,Lucic,along with Zack Kassian and Patrick Maroon have provided a level of toughness the team hasn’t had nor has their competition seen in a long time. This Oilers bunch is a team that hasn’t been one to mess with this season and it’s showed. Guys are no longer afraid to stand up for themselves or their teammates anymore and don’t back down from a fight. I appreciate that from this team.

As for who they face in the first round, does it really matter? I’m sure most fans would want to see a match-up with the Calgary Flames, but I personally would like to face Anaheim. When it comes down do it,though,it doesn’t matter who the Oilers face,it just matters that they’re in and I’m absolutely thrilled!